“It was a tremendous experience to watch and participate with all the exceptional cadets who matured and grew as both men and women. The highlight was just to be part of watching them develop and become exceptional people that Canada could be proud of.”

Major (Ret’d) Victor Trnavskis was a member of the Athletic Department staff at the Royal Military College of Canada in Kingston, Ontario from 1973-6. 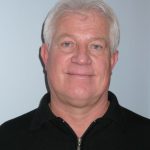 e-veritas: Did you also coach or be involved with a varsity team?

I was also weight training coach at RMC from 1975-6. As weight training coach, I recommended good form and specific combinations of reps, sets, exercises, and weights to help improve cadet performance and overall strength. The equipment we used included barbells, dumbbells, pulleys, and weight machines, along with the body’s own weight in the case of chin-ups and pushups.

I was the squash coordinator/coach at RMC from 1975-76 for the faculty league. Squash is played by two or four players in a four-walled court with a small, hollow rubber ball. Since rallies between experienced players often involve 30 or more shots, aerobic and anaerobic fitness are extremely important. Skill in squash is usually acquired by a lot of practice and game experience. Strategies include “dominating the T”, which means being in the best position to retrieve the opponent’s next shot. 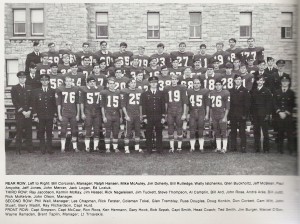 e-veritas: What do you consider the high-light of serving at the Military College?

Victor Trnavskis: It was a tremendous experience to watch and participate with all the exceptional cadets who matured and grew as both men and women. The highlight was just to be part of watching them develop and become exceptional people that Canada could be proud of. There are endless stories but they all have a common thread of that vibrancy of life and fullness of potential for life that each of them exhibited you couldn’t help but feel both proud and hopeful of our future.

Victor Trnavskis: I am no longer involved with the CF. My wife Karen Green and I live in Caledon Ontario. I am President of NGI Designer Glass, Inc. a custom glass fabricator in Concord Ontario. The firm specializes in commercial architectural decorative glass projects around the world and is unique in the range of fabrication we provide. We manufacture, micro glass, bent, coloured, sand blasted, antique, and laminated glass products. We offer custom services in colouring, lamination, bending, acid etching, sandblasting, Computer Aided Design, shaping, polishing, bevelling, V grooving, water jet cutting, UV bonding and engraving. We are the first glass company in the world to have all our products and services GREENGUARD. The Greenguard Environmental Institute certifies a variety of product types that exhibit low VOC emissions. Greenguard certified products provide valuable Leadership in Energy and Environmental Design (LEED) points for any project. The LEED green building rating system seeks to define “green building” by standardizing it with a list of specific criteria that cover a range of building performance issues and their impact on the environment.

Tom Sloan: I served as a physical education and training instructor at Royal Roads Military College from 1968-70. At the time, Capt. Ray Irwin was the Base Physical Education Recreation Officer with a staff of 4-5 PERIs. Although I was posted to RMC in 1973-4, I opted to be listed as not available for promotion and stayed in Chilliwack, BC.

e-veritas: I understand that you had been to RRMC several times before being posted to the College.

Tom Sloan: Yes. Since the PT staff at RRMC was small, the BPERO would call upon PERI staff working in the region for assistance during major events such as the annual all-cadet boxing and wrestling eliminations. The first time I worked at RRMC was in 1953, as part of our training for a PT course. In 1956, I helped out by refereeing bouts at a cadet boxing tournament.

e-veritas: What were your duties during the summer months?

Tom Sloan: While the cadets were on summer training the college was very quiet. For 2-3 years in a row the BC Lions football training camp used the RRMC facilities. Although I didn`t train or coach the Lions, I was responsible for watching the facilities. I was responsible for the fields, and made sure the fields were lined properly. I became friendly with the teams and training staff. They would ask if I was going to open the Chief and WOs mess so they could have a beer after practice.

e-veritas: What are your memories from RRMC?

Tom Sloan: I recall that the cadets were extremely fit. Since there were fitness tests every 6 months, the cadets were motivated to get and stay in excellent shape. The cadets were in good shape when they came into the college. After two years of always running on the double, they were thin and fit. Although the cadets seemed to be hungry and to eat a lot, there was no fat rolling around on their gut. The schooling was hard and the cadets worked long hours.

e-veritas: What were the challenges at RRMC?

Tom Sloan: I recall that there was a high drop out rate. Of the 125-30 cadets who started at RRMC, there might be 100 within a few weeks. The rules loosened somewhat while I was at RRMC. Initially, the cadets were not permitted to own a radio; then the seniors were permitted a radio. Initially all the cadets moved double time, then the seniors didn`t have to move double during certain hours.

e-veritas: How did you come to be a PERI?

Tom Sloan: After serving for 3.5 year in the Navy as radar plotter (RP), I transferred to the Physical Training branch in 1953. I was attracted to the PERI trade because I was an all-round athlete. Although I played all of the sports, I particularly enjoyed playing soccer and softball.

e-veritas: Did you also coach or be involved with a varsity team? Explain.

e-veritas: You mentioned European handball. Please tell us more about the sport.

Tom Sloan: I coached the RRMC European handball team. General Jean-Victor Allard, the Chief of the Defence Staff (1966-1969) was a major fan of European Handball and decided that RMC and RRMC should compete against each other in the sport within 3-4 months. Unfortunately, no one on the RRMC staff knew the sport. Since I was already the coach of the squash team, I had to track down someone in Victoria who knew the sport, who helped me track down a rulebook. European Handball is an indoor team sport in which two teams of six players and a goalkeeper pass and bounce a ball to throw it into the goal of the opposing team. The team with the most goals after two periods of 30 minutes wins. The sport offered a good workout at a relatively low cost.

e-veritas: What was your primary duty?

Tom Sloan: As a PERI, I instructed the cadets in fitness and sports. The cadets ran the intramural program but drew on the PERO/PERIs who were responsible for facility maintenance. Since all of the cadets were involved in a few sports such as boxing and wrestling, the entire athletic staff were involved in refereeing and organizing the box offs.

e-veritas: Did you have any tasks during the weekends?

Tom Sloan: Since most of the varsity teams, such as Basketball competed locally, there wasn`t a lot of travel on the weekends. On Friday evening and Saturday, I taught the children of the Navy dependents swimming and gave Red Cross training at HMCS Naden (now CFB Esquimalt). The PERIs weren`t paid extra to instruct the dependents classes; it was just a part of the job. At one time or another each of the PERI staff performed facilities maintenance in the evenings or over the weekend.

Tom Sloan: My wife and I lived in Belmont park; naval housing attached to Royal Roads. The 600 acres of self-contained grounds were beautiful and the views of the mountains and ocean were spectacular. While I was in the Navy, and away at sea periodically my wife preferred living in the gated naval community rather than buying a home. At the time, there were commissionaires at the gate, a military police detachment and a fire brigade. The engineering was extremely good. If there was a problem with the housing, it was fixed immediately.

e-veritas: What do you consider the high-light of serving at RRMC?

Tom Sloan: I enjoyed the routine of instructing at RRMC. The College had a large intramural program. It was interesting to work with young people. Although there was a hippie movement and problems with teenagers in BC at that time, the cadets tended to be very reliable and hard working.

Tom Sloan: I retired from the Navy in 1974. I worked for Workers’ Compensation from the Monday after retiring from the Navy for 17.5 years until 1995. My wife Shirley and I live in Vancouver BC. I try to stay active although constrained recently with some eye problems. Although I resisted computers for many years, I have recently become hooked.

e-veritas: Did you hear the ghost stories at RRMC?

Tom Sloan: People told stories about the ghosts of Hatley Castle: (the ghost of Laura Dunsmuir, her son James Jr. who was KIA during WWI, a servant Annabelle who had committed suicide) would appear at Hatley Castle. There was no haunting as far as I knew. The castle could be spooky; certainly. I remember hearing groans, creaks and strange sounds.

Thanks to E3161 Victoria Edwards (RMC 2003) for carrying out both interviews.