We received word shortly prior going to press that Art Wade passed away on Saturday, 23 June. Besides his classmates and Ex Cadets from his era, Art will fondly be remembered by Ex Cadets and staff from the Royal Military College of Canada as the Executive Vice President of the RMC Club / Foundation from the mid 1990s until 1999. 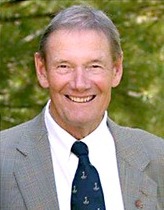 WADE, Col (Ret’d) Arthur Casebourne – August 12, 1932 – June 23, 2012 – WADE, Col (Ret’d) Arthur Casebourne died on June 23, 2012 at the Perley Rideau Veterans’ Health Center (PRVHC) surrounded by his loving family. He is survived by his beloved wife Beverley Ann (Walsh), his devoted children Meg Seal (Glenn), Casey (Alexandra), Allison Johns (Peter) and his dear grandchildren, Kaiti Seal, Tori Holm (Erik), A.J. Seal; Courtney, Remy and Jac Wade; and, Adam, Kelly and Steven Johns. Predeceased by his parents, Arthur and Alice Wade, and his siblings, Jackie and Richard. Art was born in Medicine Hat, Alberta and attended Royal Roads, Royal Military College (RMC), and the University of Toronto, obtaining a Bachelor of Civil Engineering degree in 1957. Art further expanded his career by attending the National Defence College in Kingston and later obtained his Management Consulting Certification. During Art’s 30 year military career, he commanded 4 Field Squadron in Germany and was the Commander of the School of Military Engineering in Chilliwack, BC, as well as other postings in Canada, Germany, England, and Tanzania. In the 1980s, he held a position at Public Works Canada, followed by seven years as a consultant to the Government of Bermuda, and, a fundraising position back at RMC in Kingston. Art returned to Ottawa in 1999 where he continued to fundraise for RMC. He was the proud honorary Lt. Col. of 3 Field Squadron in Ottawa. He enjoyed leisure time playing golf and bridge in the company of good friends and family. In the early 2000s, Art was diagnosed with Multiple System Atrophy (MSA) and continued his long courageous journey with this debilitating neurological disease. The family gives heartfelt thanks to the staff at the Perley Rideau Veterans’ Health Centre, where Art called home for the past three years and to Dr. D. Grimes and Dr. K. Nickerson. Donations can be made in his memory to the Perley Rideau Veterans’ Health Centre or the Ottawa Hospital Foundation Parkinson Research Consortium. A memorial service will be held at Beechwood National Memorial Centre, 280 Beechwood Avenue, Ottawa at 11 a.m. Thursday, June 28th, 2012, preceded by a visitation at 10 a.m. There will also be a visitation on Wednesday, June 27th, 2012 from 7 to 9 p.m. at Beechwood.  Source