EARL BONAR LAW It is with great sadness that we announce the sudden passing of Earl Law, at home on January, 23, 2021. Born in 1934 to Frank and Ivonette Law, Earl and his four brothers and sisters Jack (Lorraine), Yvonne, Jill (Charles) and Bill (Diane) grew up in East York. Earl graduated from Weston C.I. with distinction. Attracted by the free tuition, he joined the military and attended Royal Roads in Victoria for two years followed by two years at the Royal Military College in Kingston where he graduated with the top five awards. He played quarterback and was captain of the football teams at both colleges and also captain of the hockey team at RMC. He trained to be a navigator on CF 100s. Upon graduation in 1957, he married Sylvia Kerr and attended the University of Toronto to complete a B. Eng. In Civil Engineering after which they were stationed in Ottawa. Earl was immensely proud of their four children, Susan (Steve), Nancy, Michael (Lisa) and Carolyn (Greg). Earl revelled in all 10 of his grandchildren, loved them dearly and loved visiting them wherever the families happened to be…Brazil & Rhode Island where he was the Reading Grandpa to Tori, Spencer and Courtney, Oxford & Montreal where he was the Chocolate Grandpa to Jamie, Michael and Jennifer, Mississauga, the Book Grandpa to Zach and Uxbridge, the Christmas morning and Reading Grandpa to Mackenzie, Thomas and James. After serving his three years in the Air Force, Earl started on a successful business career in the public and private sectors. He joined Sun Oil, moved his family to Montreal and then Mississauga, eventually becoming Vice President & General Manager of Sun’s Marketing Subsidiaries. Next, he joined his brother Jack as co-owner of Law Construction, a successful general contracting business in Peterborough. They specialized in heavy engineering, commercial and industrial construction including the building of three dams on the Trent Water System. The family moved to a farm near Peterborough. In 1979, Earl ran for Trustee of the Peterborough County Board of Education and in 1980 became Chair of the Board. In 1981, he joined the Board as Superintendent of Business and Treasurer. He was very proud of the fact he was the first Engineer to hold that position in Ontario. Then, in 1984, Earl moved to Waterloo where he became Superintendent of Business and Treasurer for the Waterloo County Board of Education. In 1986, he joined the North York Board of Education as Superintendent of Finance and Business Services. In 1990, he joined the University of Toronto as Director of Facilities and Services. Earl had an exuberant zest for life and was deeply beloved and cherished by his wife Joan for 35 years. He unabashedly adored her daughters Larissa (Scott), and Ashley (Dan) and was so very proud to be Uncle Choo to Liam, Malcolm, Tess and Kieran and Grandpapa to Jack. Earl loved large family gatherings and parties and he and Joan hosted many wonderful staff parties in their garden. He had a truly great sense of fun, loved to dance and was passionate about music, specifically opera, classical and choral music …and his daughter Nancy’s singing with her guitar. Always a proud father, he treasured the memories of his trips with Susan to Ikalauit, Michael to Brazil and Carolyn to Puerto Vallarta. He and Joan travelled the world for opera and adventure ( he proposed to her on top of the Eiffel tower!). Manitoulin Island was their place to be every August and they were thrilled when grandchildren could join them in their little red cabin on Lake Mindemoya. They also loved their annual visits to Victoria and the Sechelt to visit dear friends and enjoy an early spring. Earl loved playing bridge, collecting good wine, golf (especially with his RMC Buddy Glenn and son Michael in P.E.I.), Christmas, trains, and silly toys that danced, barked or sang. For many years, he was known as the Dogfather of Rosedale Park where he would take his friend Tobermory to fetch tennis balls. Cremation has taken place and Earl will rest in peace in Mount Pleasant Cemetery. A celebration of life will be announced once Covid Restrictions have been lifted. Joan will soon be responding to the avalanche of expressions of sympathy by Family and friends. If desired, donations may be made to The Elmer Iseler Singers or The Canadian Opera Compan.

Editor’s Note: The following obituary is being re-run at the request of the Class of 1954. 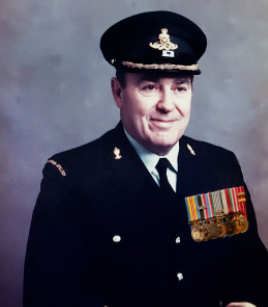 Peacefully at home, Jerrold (Jerry) Joseph Donahue, at the age of 90 years, went to his rest in the loving
arms of God on Thursday, February 4, 2021. Beloved father of Catherine and Margaret, both of Ottawa.
Predeceased by his loving wife Claudette and sons Brian and Patrick (Michael).

He will be greatly missed by many extended family and friends.

Jerry was a proud member of the Canadian Armed Forces in the Artillery for 37 years. A graduate of the
Royal Military College in Kingston in 1954. He married Claudette (Pigeau) shortly after graduation and
was immediately deployed to Korea for 6 months. During the first 17 years of marriage, Jerry was posted
19 times including 2 peacekeeping tours in Vietnam, for 1 year and 6 months respectively. Along with
several Canadian postings spanning Nova Scotia, New Brunswick, Ontario and Manitoba, Jerry and
family also traveled to Texas, Germany, Kansas and Washington DC, before finishing his service in
Ottawa. Following his active military career, Jerry taught a Middle Management course for 9 years on
contract to the Department of National Defence. Jerry was a very active member of the Ottawa
Gunners, serving as President for a number years. He was also a member of the Eastern Ontario
Gunners Association. Jerry was Secretary of the 30th Field Artillery Regiment Senate for 14 years. “Once a
Gunner, always a Gunner”.

Always active in sports, Jerry played softball, baseball, volleyball and hockey in his youth, and still
enjoyed golf and curling up until 2 years ago. A long time member of St. Maurice parish in Nepean, Jerry
also served a few years with the St. Vincent de Paul Ministry within the parish.

Special thanks to the staff and residents at The Ravines Senior Suites in Nepean for welcoming Jerry to
your wonderful community, to Geeta and Home Instead for your assistance prior to the pandemic, to
Lanny and Kelly at Qualicare Home Care, Dr. Susan Whitley and Dr. Matthew Roberts for all your
support, and to our contacts at the Dept. of Veteran’s Affairs. A very special thank you to Barbara for being
Dad’s guardian angel on earth this last year+.

Limited visitation, according to provincial guidelines, will be available at the West Chapel of Hulse,
Playfair & McGarry, 150 Woodroffe Ave (at Richmond Road) on Saturday, February 13th, from 1:00 to 4:00 pm. Pursuant to current maximum attendance COVID regulations, please RSVP on LCol Donahue’s web page at www.hpmcgarry.ca. Attendees are required to wear face masks, and asked to respect and practice social distancing.

Funeral Mass and Celebration of Life will be held at a future date.

In lieu of flowers, donations to the Dementia Society of Ottawa and Renfrew County or the Heart and
Stroke Foundation would be greatly appreciated.

It is with great sadness that we announce the sudden passing of our beloved brother and uncle, John Robinson (Rob) Benson.He was predeceased by his parents, Marjorie and Edward Benson; his sister Barb (Paul) Couture; his brother Mike (Jackie) Benson; his sister Terry (Pat) Carroll; his sister Lynne (Brant) Heywood and his brother-in-law Maurice Bauche.He is survived by his sisters, Bev Bauche and Rosemary Hebert (Denis). He was a loving uncle to many nieces and nephews and several great-nieces and nephews.Rob was a loving, kind, giving, patient and gentle man who loved his family beyond all else. He was very proud of the majestic A-frame cabin he built with some help from his family and friends. He chose the location of a beautiful bay surrounded by forest in Minaki, Ontario and loved playing gracious host to anyone who wanted to visit. He took great pleasure in organizing “cousins weekends” for his nieces and nephews at the cabin. He loved to read and had a huge collection of books that were meticulously organized alphabetically. He built a second cabin on the property which he lived in during the winters and rented during the summer for many years, but eventually sold it.Rob graduated St. Paul’s High School in 1952 and attended the College Militaire Royal de St. Jean in Quebec. He served in the Navy for 13 years and spent 26 months in England, along with officers from every Commonwealth navy, taking the Junior Officer’s Education and War course at the Royal Naval College in Greenwich. Upon returning to Canada, Rob served on five Canadian naval vessels. After retiring from the navy in 1965, he continued serving in the naval reserves on the Great Lakes and in Esquimalt, retiring in 1973 as a Lieutenant-Commander. Rob obtained his BSc, BEd and MEd degrees at the University of Manitoba. He taught senior high school mathematics and computer science at Fort Richmond Collegiate in Winnipeg for 20 years. He was instrumental in helping develop computer-assisted systems for the Manitoba Department of Education.In 2016, Rob suffered a devastating stroke that left his right side paralyzed and his speech impaired. He bore this bravely, without complaint and always with a smile on this face. The family would like to thank Simkin Centre who provided Rob with a warm, loving and caring home, where he received excellent care in a happy environment.Rob was cremated at Thomson “In the Park” Funeral Home. As per his wishes, there will be no funeral or memorial service. It was his wish that family and friends hold a Celebration of Life when it is safe to do so, to raise their glasses and wish him a “bon voyage.”