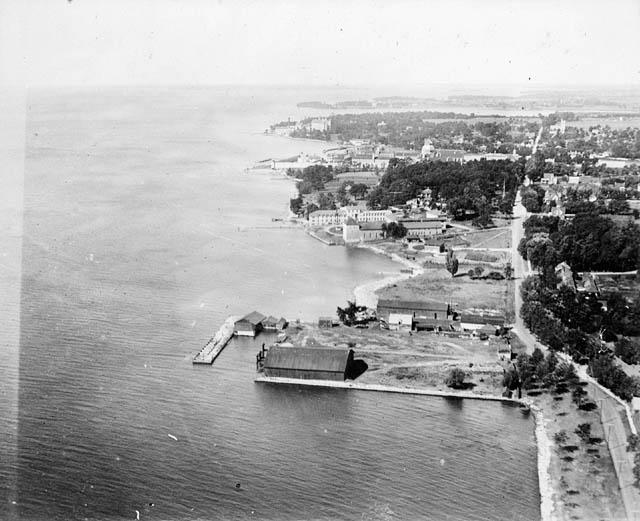 The St Lawrence wreck site and surrounding area 1919 facing west along Kingston waterfront. The wreck is in the middle of the photo, to the east of the tower like limestone building with 3 small windows. This and adjacent buildings were part of the brewery and distillery owned by Robert Drummond and later George Morton. Courtesy Library & Archives Canada PA-030634.

“I found photos in the RMC Archives showing cadets setting off gun cotton charges on floating rafts in Navy Bay, but I don’t know of wrecks being blown up there.”

E3161 Victoria Edwards interviewed Jonathan Moore of Parks Canada’s Underwater Archaeology Service, who is currently undertaking archaeological exploration and site inspection dives at sites in Navy Bay and Deadman Bay near the Royal Military College of Canada. He received a Bachelor’s degree in Classical Studies and Archaeology at Queen’s University in 1991. While at university he learned to dive and began his involvement in underwater archaeology. He went on to complete a Master’s degree in Maritime Studies at the University of St. Andrews. He has worked on over 50 underwater archaeology projects across Canada on a range of subjects and topics, from historic shipwrecks to submerged prehistoric landscapes and sites.

e-Veritas: You began researching the wrecks at Kingston prior to your full time employment as an underwater archaeologist for Underwater Archaeology Service, Parks Canada in 2001. 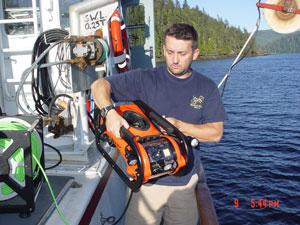 Jonathan Moore: Here’s how I got involved. I did my first dive in 1988 on what is now identified as HMS Princess Charlotte. At the time, it was frequently used for open water check out dives that take place at the end of SCUBA diving courses. I took my course during first year at Queen’s University over the winter of 1987-1988 so when the ice was out of the harbour, the check out dive took place for the class. Also, in 1987 I got involved with a local marine heritage preservation group called Preserve Our Wrecks (Kingston). At that time they were engaged in a survey of the 1812 wrecks directed by a diver and friend of mine named Eric Sharp. I joined the survey as a volunteer and did my first underwater archaeological dive on what is now identified as HMS Prince Regent in May 1988.

e-Veritas: After completing your Master’s Degree you continued your own studies of the wrecks for a book on 1812 shipwrecks.

Jonathan Moore: First, in 1994-1995 I organized a Photo Project to record local wrecks being covered by zebra mussels and included the 1812 wrecks in this photographic survey, and second, I began work on a chapter for a book on 1812 shipwrecks. This book, some 15 years in the works is: Dr. Kevin Crisman (Ed.), ‘Coffins of the Brave: The Nautical Archaeology of the Naval War of 1812 on the Lakes’, published by Texas A&M University Press, and available in 2013. My chapter is called “Frontier Frigates and a Three Decker: Wrecks of the Royal Navy’s Lake Ontario Squadron”.

e-Veritas: Your team got involved in active surveying and assistance with documenting sites in Navy Bay and Deadman Bay in 2002.

Jonathan Moore: Starting in about 2002 our team (Underwater Archaeology Service) got involved in active surveying and assistance with documenting sites in Navy Bay and Deadman Bay. This was related, in part, to the transfer of ownership of Fort Henry to Parks Canada from DND. I have been involved with and directed most of this work in Kingston. I have also helped three Master’s students with theses on sites in Deadman Bay and Navy Bay: Jonathan Lofthouse (launching slip in Navy Bay); Ben Ford (HMS Princess Charlotte); and Nadine Kopp (Navy Bay Wreck). 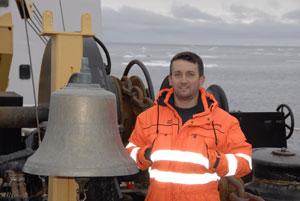 Jonathan Moore: When I was actively researching and surveying the wrecks in the mid- to late-1990s I spent a lot of time at the RMC Archives in the Massey Library, and received a lot of support from the staff. I went through the entire photo archive looking for late nineteenth or early twentieth century images of the wrecks (this took many days). Some of the most fascinating sources were the ex-Cadet photo albums. I also went through the Preston Papers, which is the archival collection of the late Professor Richard Preston, the first to systematically research the wrecks. This was fascinating. My paper “Another Look at the Fate of Kingston’s Warships” was timed to coincide with 50 years after the publication of Preston’s “The Fate of Kingston’s Warships”.

e-Veritas: Did anyone else from RMC provide assistance?

Jonathan Moore: Over the years many volunteers have helped with fieldwork. Since 2002 our team has worked with DND in the documentation and management of underwater sites in the two bays. We communicate regularly with the Base Environment Officer Mr. Andrew Wollin. We also work with the CFB Kingston Dolphin SCUBA Club which has volunteered with us on joint projects, such as the survey of “Guenter’s Wreck”. I know that Nadine Kopp also worked closely with volunteers that included Dolphin Club members. Over the years I have communicated very regularly with 8057 Ross McKenzie. He’s pointed me in the direction of some sources, including the file on the Underwater Exploration Craft, and has been very helpful.

e-Veritas: Any favourite wrecks in Navy Bay or Deadman Bay? 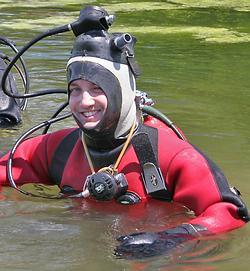 Jonathan Moore: I don’t really have a favourite. One thing I always point out to divers and other interested parties however is that the sites in Navy Bay and Deadman Bay are a fascinating assemblage of sites that encapsulate the early naval history of Kingston. There are wharves, launching slips, warships (big and small), scattered wreck timbers, boats and isolated artifacts. We can consider this a “cultural landscape” albeit submerged.

e-Veritas: I understand that early RMC cadets damaged the wrecks.

Jonathan Moore: My friend Rick Neilson, diver and historian, has gone through almost all of Kingston’s early newspapers to transcribe marine events and news. He has found several references to cadets having used the wrecks in Deadman Bay for demolition practice. I found photos in the RMC Archives showing cadets setting off gun cotton charges on floating rafts in Navy Bay, but I don’t know of wrecks being blown up there. I have photos of this. I also went through old copies of the RMC Review at Massey Library, and Ross also pointed me towards some articles.

e-Veritas: Any advice for RMC cadets and staff who are interested in diving?

Jonathan Moore: It is my understanding that divers need permission to access Navy Bay and Deadman Bay but I am uncertain of the actual requirements. You might want to check with the base. Divers should not disturb or remove anything in the bays, and as is now standard practice, exercise “low impact” diving. Care should be taken of boat traffic of course. Anyone new who is interested could contact the Dolphin SCUBA Club and/or Preserve Our Wrecks. Jonathan.Moore@pc.gc.ca 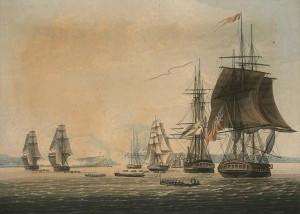 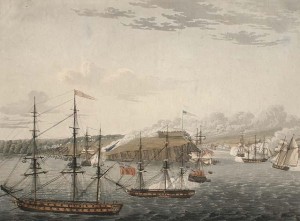 Attack of Fort Oswego on Lake Ontario North America, May 6th 1814 drawn by James Hewett R.M. Published May 1, 1815 Engraved by R. Havell & Son. The Prince Regent (later renamed Kingson) is at the far left foreground. The Princess Charlotte (later renamed Burlington) is in the middle foregrond. Both ships are at anchor. Courtesy Library & Archives Canada 2837445.

Note from Ross McKenzie: The print of the Attack on Oswego, based on a drawing by Lt. James Hewett, Royal Marines, is of particular interest because James Hewett was the father of Col. E.O. Hewett –  first Commandant of RMC!

James Hewett was an officer in the R. Marine Battalion stationed at Pt. Frederick in the later part of the War.