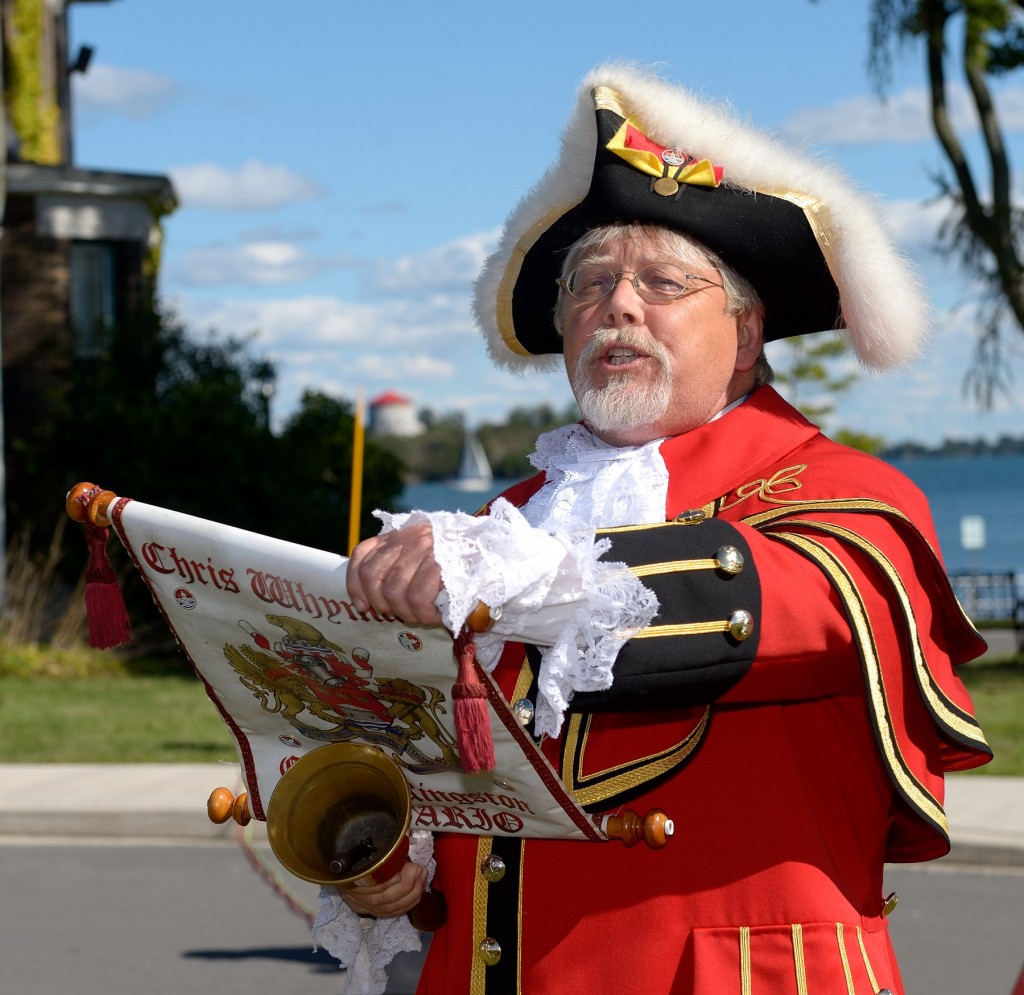 The Royal Navy assumed command of naval facilities operated by the Provincial Marine on Point Frederick 200 years ago in 1813, and the Kingston Dockyard had enormous strategic impact on the successful prosecution of the War.

During the War of 1812-15, Canadian, British, and American land and naval forces campaigned across a vast territory from the Mississippi Valley, through the region south of Montreal, and well into the territories of the Atlantic coast. But the conflict’s outcome would be determined, in particular, by events on and around the Great Lakes. For the Anglo-Canadian Forces, the St. Lawrence River and Lake Ontario was the strategic linkage for manpower and vital supplies for all inland points including the provincial capital of York, the Niagara Peninsula, and further garrisons west. Control of Lake Ontario would give crucial advantages in initiative, surprise, movement, and re-supply.

The keel of HMS St. Lawrence was laid on 12 April 1814, within feet of where we stand today in the Royal Military College of Canada, and she was launched 156 days later, in mid September 199 years ago. A first rate ship of the line, she carried 112 guns, was 194 feet long, and displaced 2,304 tons. While the ‘Giant’ never saw action, her sustained and powerful sailing presence and the ship-building success of the Dockyard, with two more first rate ships in the stocks, denied the Americans dominance of the Lake, securing the vital supply and communications routes west.

During the war the Dockyard and associated establishments grew rapidly, filling the Point. At its height, there were over 1,600 members of ships’ companies, a Dockyard professional staff of nearly 130 supported by 1,200 day labourers, and a naval hospital built and staffed to meet the Navy’s special needs.

Kingstonians and tourists alike can now walk this history as part of the City’s waterfront walkway from Fort Henry to the Murney Tower and on to Lake Ontario Park.

Dated at Kingston this 5th Day of September 2013.

1812 Walking Tour Opened at the Royal Military College of Canada

The Friends of Point Frederick’ a newly incorporated charity designed to help tell the stories of RMCC, Point Frederick and other sites within Kingston

Two former commandants, 3572 Frank Norman and 4459 Ed Murray, as well as a former Dean of Arts, S124 Ron Haycock, brought history to life last Thursday at the official presentation and opening of the 1812 walking tour at the Royal Military College of Canada. This self-guided tour allows visitors to walk through the history of the War of 1812 through 13 interpretive stations, all located throughout Point Frederick. A large crowd of both military and civilians from the area were in attendance during the 45 minute official opening during sunny skies and ideal late summer weather. 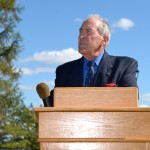 “We had a dream! We wanted to find a way to bring life into the history of the War of 1812, but where to start? Light bulb – H2652 Brit Smith’s story Board on the Royal George in the park at the foot of Gore St. Why not use the story board approach.” said Ed Murray, who was flawless as Master of  Ceremony for the event.

And so the RMCC museum committee began its work, finding support and funds to help create what will be a very popular walk through history, one that happens to fill in the existing blank of the Kingston Waterfront Pathway, between fort Henry and the Lasalle Causeway. 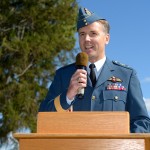 the microphone with the MC and summed up his feelings on the project as follows:

“I am delighted to have taken part in the official opening of the 1812 Walking Tour. The amazing Story Boards will tell the incredible history and the strategic importance of Point Frederick and the Naval Dockyards during this period. We have many groups and individuals to thank for turning this vision into reality. I am particularly pleased with the splendid leadership role our RMCC Museum Committee played throughout this project.”

Also, taking to the microphone were, Chris West, Chair of the Marine Museum Board and René J. Marin – Special guest speaker. 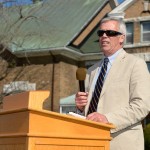 Chris West, Chair of the Marine Museum Board

Ed Murray singled out Mr. West and praised him for his rapid and enthusiastic response, who convinced his Board to become a Project Sponsor; promise of assistance from Museum staff. Chris in his short talk assured every one of the continued cooperation and support from the Marine Museum.

René J. Marin a retired Federal Court Judge; a prolific writer on the law, who still teaches at the University of Ottawa and has been extremely active in investigations and reviews of law enforcement agencies in Canada, including those of the Canadian Armed Forces.

As the focus for the occasion was on our War of 1812 naval heritage, Judge Marin, was a great choice as guest speaker. In addition to everything else, he is a Commodore in the Supplementary Reserve and special advisor to the Commander of the Royal Canadian Navy.

His easy going address was both educational and enjoyable as he mixed in Abraham Lincoln, the 16th U.S. President along with Sir John Alexander Macdonald, first Prime Minister of Canada tidbits to help educate the crowd on the importance of the War of 1812 and the role it played in forming Canada

The atmosphere surrounding this event was energized, with everyone beaming with pride. Many thanks to all those who helped make this dream a reality for the museum, providing everyone the opportunity to explore our heritage and bring our history to life in a most exciting way.

Others who made the walking tour a reality:

7897 M. Gilles Langlois, for translating and editing the text for the story boards, the brochures, and the material for the web site.

25854 OCdt Chris Bencze, RMCC, who prepared the engineering drawings for the bases and stands.

Ms France Couture, Management of Information Services Manager, RMCC, who generously allowed her staff the time to support this project and provided sage advice while supervising that participation.

Ms Brigitte Conrad-Avarmaa, RMCC web master, who created the Quick Rresponse codes for the story boards and offered many suggestions of how to best present the information on the web site.

Mr. Brad Lowe, Base Photo, who created the digital image of Dr. Southmayd’s painting and provided the watermark image of the Stone Frigate.

WO Jason Haggett and WO Karen Kazier, Maintenance Services Superintendents, RMCC. WO Haggett, now in Trenton but here today, for his early support to the project, assisting with discovering an alternate means of siting the boards above ground given the archeological sensitivity of the Point, and WO Kazier who inherited the commitment of her Roads and Grounds staff and enthusiastically embraced the undertaking.

Mr. Mark Scouten, RMCC Roads and Grounds, his foreman Bob Bos, and Dave Bresee who took on the tasks of siting the concrete bases – 400 Kgs with no handles, gently placed on top of leveled crushed gravel, then attaching the stands and story boards to those bases.

From the Marine Museum, Doug Cowie and Jama Clark who helped in many ways, with advice and particularly as the paymaster, and

8294 Art Jordan, the Project Manager, who took on the job without knowing what might happen and the members of the RMCC Museum Committee who embraced the concept of creating this story, found a means of funding it, and supervised its development.

Each of these individuals has been fascinated with the project, worked on their bit with enthusiasm, and have completed the Walking Tour on time and within budget – an uncommon occurrence these days.

For all in all in attendance, certainly a day to remember. BZ – Ed, Frank and Ron.

More photos from this event by Cpl Jamie Montgomery  Here