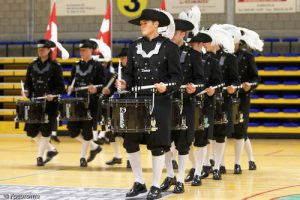 This link takes you to a video showing the most extreme precision drumming while marching you probably will ever see. It is from Switzerland . It is difficult to imagine how these guys remember all the intricate actions and keep going without being exhausted. Some of the routines on the last half of the film clip are really intricate. 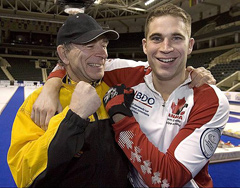 Congratulations to John Morris and the entire Kevin Martin rink from Alberta, winners of the 2009 Brier – emblematic of men’s curling supremacy in Canada.

John is the son of 7301 Earle Morris (RMC ’67) and wife Maureen. The Alberta team also captured the Brier in 2008. For the second straight year they went undefeated in round robin play and the play-offs.

Earle is himself a 3-time Brier competitor, representing Ontario; Quebec; and Ontario – the only person in the 83 year history of the Brier to do so.

He was the coach of the 1998 World Junior Champions; currently the Australia Men’s National coach, and coach of the 2009 Canadian women’s silver medal winning team.

Earle also invented “The Stabilizer” the only curling sliding device of its kind with a patent.   Source

Catching Up With the News;

Opinion – For Our Country: Students in the Military;