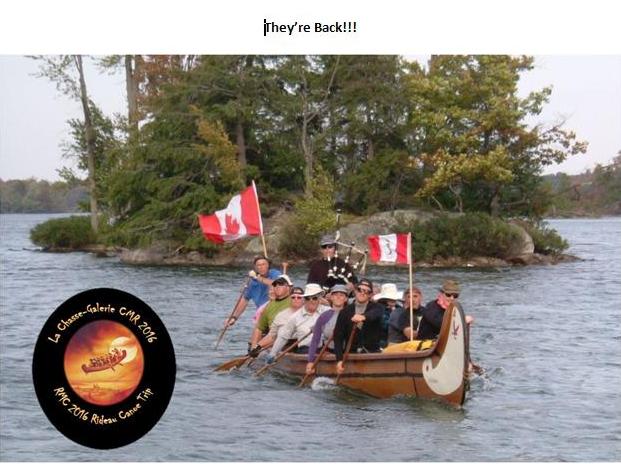 A long time ago a group of voyageurs made a deal with the devil to fly them in a canoe from their backwoods camp to their homes and loved ones on the Saint Lawrence. In September 2016 a crew of fifteen will relive the chasse-galerie legend by paddling a 36’ canoe along the Rideau from Ottawa to Kingston. The journey of 202 km takes 7 days and 100,000 paddle strokes. The crew plans to arrive at RMC just in time for the Legacy Dinner and the Reunion Weekend.

The crew consists of 2 cadets plus 4 lady and 9 gentlemen ex-cadets from all three colleges. Former RMC Commandant and CDS Tom Lawson will continue John de Chastelain’s tradition of playing the pipes amidships.

This is the fifth and final chasse-galerie expedition. Previous trips in 2000, 2001, 2006 and 2011 raised more than a quarter of a million dollars for sports. Most of this money went to the Danny McLeod Athletic Endowment, which funds the purchase of specialized sports gear as well as athletic travel outside Ontario and Quebec. The endowed fund capital currently exceeds $200,000.  Since the last canoe trip in 2011, $67,000 in interest has been disbursed by the fund. This is greater than the amount actually raised in that trip and illustrates the enduring value of the RMC Foundation’s  endowments.

The 2016 objective is to add $150,000 to the fund. Each paddler has been asked to raise two to five thousand dollars as well as paying for trip expenses. In addition, a group of generous sponsors has agreed to match every dollar raised by the crew, thereby doubling the power of your donation.

Donations made by 31 December are tax-deductible in 2015.

In addition to supporting excellence in Athletics at our Royal Military Colleges, your contributions will contribute to a most deserved and highly useful, on-going memorial for the late H25917 Major Danny McLeod.

Names of the lucky RMC and CMR cadets will be announced in mid-2016. In the meantime, donations are welcome in the names of “RMCC cadet” or “RMC Saint Jean cadet.”