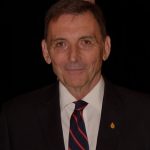 Little did 8057 Ross McKenzie realize when he first arrived at Royal Military College of Canada in 1965 that he would spend almost 50 years either in ‘uniform’ or working as a DND Public Servant. Other than his early Regimental Service, he served the College, as an officer cadet and then a member of the staff – likely a record in the history of RMC.

Ross returned to the College as the Personal Assistant to the commandant, 3572 BGen Frank Norman in 1984, he found the job was filled by four Cadets! He became the Protocol and Information Officer.

It was five years later, when 4459 Commodore, Ed Murray, another  history buff, much like Frank Norman, was commandant that Ross was hired as the civilian RMC Liaison Officer and Museum Curator. Actually, it was two half-time positions which equaled one full-time gig.

Back in those days a commandant could do a lot at the local level.

Frank Norman and Ed Murray following their CAF retirements have settled in Kingston. They continue their lifelong love affair with the college. Ed has been the Chair, while Frank is the Secretary Treasurer of the Heritage and Museum Committee; positions they have held for the past couple of years. Both have provided outstanding support to Ross in moving things forward on the museum front.

Like most places and definitely at RMC when new leadership takes over, changes happen. This was certainly the case for Ross and his job titles and responsibilities. From 1991 until 2006 there were eight different commandants. Some had more interest in the museum than others.

Lo and behold in 2006 he became the full-time RMC Museum Curator. Along the way, in 1994 he earned a Master of Arts War Studies (RMC).

It has always been quite remarkable to this writer how Ross rolled ‘with the punches’ through all the changes. By his interest, work ethic and pleasing personality, he has performed miracles mostly ‘flying solo’ with a few exceptions from time-to-time.

Without hesitation, Ross told us, “I must acknowledge the contributions to the Museum of two significant individuals.”

The first person came as no surprise. “Professor H2859 Jack Pike (Professor Emeritus of Mechanical Engineering) who was the Chairman of the Museum Committee for many, many years. A true gentleman, Jack devoted himself to promoting the College and through the years of ‘benign neglect’ his efforts ensured the Museum’s survival.”

He made mention too of a long-time volunteer. “Professor Dean Taylor (Professor Emeritus of Ryerson University). Dean has over sixty years of experience with antique firearms and his patient efforts in the care and maintenance of our arms collection have been invaluable.”

The former Armoured Officer, who served both in Canada and in Germany following his 1970 graduation from RMC with a BA Honours History is a cooperative and enthusiastic gentleman by nature.

We know this first-hand because of the many interesting articles that he supplied to e-Veritas over the past ten years. We were surly only a small part to the assistance he provided others on a very regular basis. Year in and year out!

We couldn’t help asking what he felt were some of his greatest challenges he had to deal with while working at RMC.

“Overall I’d have to say that the greatest challenge that I faced during my tenure with the Museum was the fact that I was essentially a ‘one-man-band’. This played out in different ways.”

It was only after he became a full-time Curator that progress was made in improving the Museum with the development of new storage facilities and a new weapons vault.

“For the first time the whole collection was accessible, but this improvement brought further challenges with ‘collection management’ and with greater expectations:  the College’s collections are so diverse and extensive that proper care requires a staff of more than just one museum professional and, once the magnificence of the collections became apparent, – after years of benign neglect the Museum was suddenly ‘on the map’.”

He added, “This brought demands for more displays, more tours, more historical briefing notes, etc. all of which are of course good things in themselves- but which only emphasize the fact that the Museum’s greatest need is for additional professional staff.”

Every job has its ups and downs.

“There were many aspects of my job that I enjoyed. I have a great interest in historical research and military artifacts, so it was easy to get caught up in this minutia, but, on reflection, I’d have to say that my greatest satisfaction came from meeting and working with a wide variety of people.”

As we mentioned he had other duties well away from the museum.

“My Registrar and Museum jobs brought me into contact with all levels of College staff and I always received great support for which I am truly thankful. Over several decades of conducting College tours I met a diverse range of visitors including a large number of visiting VIPs.”

With a chuckle he added, “Apart from being the Commandant, what other job could give one the opportunity to engage with Ambassadors, senior foreign military, government and academic officials – and a walk-about with Dan Aykroyd?”

As a result of his enthusiasm for the RMC museum since its earliest days, he has built up an extraordinary wealth of knowledge not only about the history of the museum and its exhibits, but also about many of the military personalities and faculty & staff that have attended and worked at RMC since the beginning in 1876.

Those of us who have been around the college for a number of years have seen first-hand the many contributions he has made around the peninsula. For the majority of the time, his work went mostly under the radar unless one was personally working with him on the particular project.

Frank Norman summed it up nicely. “Over time, he became ‘the Historian’, the ‘go-to-guy’ on how things had developed over the years, and with Professor Jack Pike, the builder of the Museum from a small collection to what we have today.”

We thank Ross McKenzie for his critical contributions in ensuring that the RMC Museum has a bright future. We wish him a happy retirement following a 49 year ‘stellar’ career.

What others have to say about Ross McKenzie:

The heritage of RMC is embodied in the contribution of its graduates to the service of Canada, both in peace and war. The RMC Museum, with its collection of artifacts and archives, is the repository of much of the material which supports the RMC story.

Ross McKenzie, building on the museum collection for which he took responsibility 26 years ago, has left us a wonderful gift, one which will be enjoyed for generations. It is a remarkable legacy.

Ross has, as our curator, paid careful and vigorous attention to acquiring new artifacts and archival material related to Ex Cadets, and encouraged us to pay attention to our heritage through the RMC historical stories he has written, the historical displays he has created, and the many tours he has conducted for visitors. For all those who have an interest in the heritage of RMC, now and in the future, Ross has assembled much of the material from which researchers will enlarge on the RMC story.

“The effort to make Canada’s Rideau Canal and associated fortifications a UNESCO World Heritage site was a huge undertaking, and it could not have been successful without people like Ross.  The peninsula is part of the world’s historical and cultural heritage, and Ross has been a major part of its preservation and enhancement.

During his years in the Regisrar’s office a generation of liaison officers from Ontario’s other universities and colleges came to associate RMC with Ross’s genial and erudite presence at every event.”