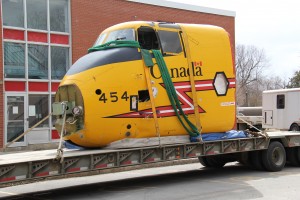 There is an Academic Wing, a Cadet Wing, a Military Wing and a Training Wing. But there are other wings at RMC: an F104 Starfighter Wing in Sawyer Mod 1, and now, a Buffalo wing! Important parts of the RCAF Buffalo CC115454 arrived by transport on Wed 27 March to Building 3 where the cockpit will become a cockpit simulator to support the Aeronautical Engineering undergraduate programme, Flight Dynamics and Advanced Aircraft Design research led by Dr. Ruben Perez. The wing and the nose-landing-gear structure are of great interest to Dr. Catharine Marsden who imparts aerospace structural design wisdom to Cadets at both undergraduate and graduate level. The wing will find a home somewhere in Sawyer Module 1 or 2 where it can be studied up close and personally. The cockpit will be mounted in Building 3 and over the coming years, will be transformed from the hulk by the craftsmen in the Mechanical Shop in the Department of Mechanical and Aerospace Engineering.

A little history of aircraft 454 follows: