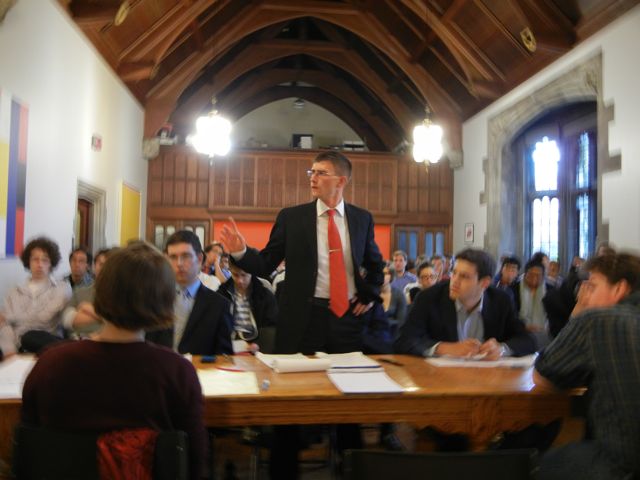 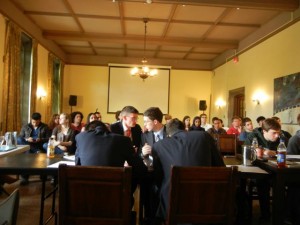 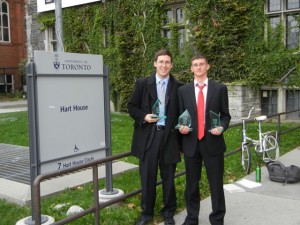 Article by the RMC Debate Club

Debate has a long history at RMC: for decades, a debate has featured among the events contested during the exchange with West Point. Throughout the rest of the year, the members of the RMC Debate Society meets weekly to hone their skills and brush up on knowledge of various issues. On many weekends, the club sends several teams of two debaters to tournaments hosted by universities across Canada and attended by hundreds of students from leading universities. This fall, RMC competed at three tournaments, and demonstrated that the talents of the College’s officer cadets make them a force to be reckoned with.

The Hart House Invitational, hosted by the University of Toronto, featured sixty-eight teams from across Canada and the United States, and is one of the most hotly contested tournaments in the fall season. 25243 NCdt David Reid and 25192 OCdt Nevin Hotson placed second of the sixty-eight teams in the preliminary rounds, and advanced to the final round of the elimination rounds.NCdt Reid was the top-scoring debater at the tournament, and OCdt Hotson was ranked twenty-third. 25038 OCdt Kevin Morin and 25066 OCdt James Brown also competed, placing fifty-fifth against very tough opposition.

The Chancellor’s Cup, held by Queen’s University, was attended by forty-eight teams. NCdt Reid and OCdt Hotson placed eighth in the preliminary rounds, only just qualifying for the elimination rounds, but proceeded to advance to and then win the final round of debate. This marks the first time in years, if indeed ever, that RMC has won a tournament. NCdt Reid was the sixth-place speaker. OCdt Brown and OCdt Morin placed twenty-third in the preliminary rounds, a phenomenal finish for debaters with less than a year’s experience. 25817 OCdt Yana Volodarets and 26032 OCdt Kyle Reed also competed, and placed thirty-ninth. 25954 OCdt Saad Sultan served in the judging cadre.

Apart from tournaments, many novice debaters were recruited following the RECSPO in October. We look forward to bringing them to tournaments in the new year.

The final event of the semester will be another first for the RMC Debate Society, as NCdt Reid and OCdt Hotson prepare to attend the World Universities Debating Championship, to be held in Manila, Philippines between 27 December and 4 January. This tournament will be attended by eight hundred debaters from 236 universities and 42 countries; RMC is the only military academy to field a team this year.

This has been an extraordinarily successful season for our club, and thanks are due to the ex-cadets who contributed as previous presidents and mentors (24445 Dan Powell, 24742 Matthew Hou, and many others); to our club supervisor Dr James Mckay; and to the Director of Recreation and Intramurals, Christine Powers for her tireless work on the administrative and advisory frontier. We would also like to extend a huge thank-you to the RMC Club Foundation for their generous support for the delegation attending the World Championship.