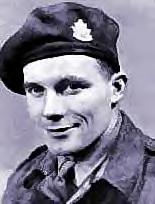 2357 Brigadier-General Denis Whitaker D.S.O. (RMC 1933) was interviewed in Toronto on 19 March 1991. He was an all-star quarterback for the Tigers before the war. Whitaker was first a captain and later a Commanding Officer of the Royal Hamilton Light Infantry (RHLI), in Northwest Europe during the Second World War at Dieppe, Woensdrecht, Falaise, Goch-Calcar Road and the Hochwald. He was awarded DSOs at Dieppe and at the drive to the Rhine River. He and his wife, Shelagh were co-authors of “Tug of War: The Canadian Victory that Opened Antwerp” which won the J.W. Dafoe book prize for distinguished writing on Canadian and international affairs in 1984. The couple also wrote: Rhineland: The Battle to End the War (1989); Dieppe, Tragedy to Triumph (1992); and The Soldiers’ Story: Victory at Falaise (2000). He was chairman of the Canadian Equestrian Team for 22 years which won two world championships and two Olympic medals. He was appointed a member of the Order of Canada in 1989. The French government named him an Officer of the Legion of Honour (France) and Belgium appointed him a Commander of the Order of the Crown. He was also a member of Canada’s Sports Hall of Fame. He died on 5/30/2001. He was remembered with “The Whitaker Cup”, which is awarded each year to the top Team Captain of a RMC varsity sports team.

On Royal Military College “old boy” network and its impact.
There were many captains and majors at RMC when he was there (1933-7) who rose to high command. Most of the top command were ex-cadets which was only natural as they had the background that the militia did not. It was also only natural that camaraderie should keep ex-cadets together. Even so, he didn’t think he received any favouritism because of his ex-cadet status.

On the Permanent Force
The militia for the most part had poor training pre-war, and the officers lacked the education and training. The Permanent Force was better, though not great. There was also tension between the PF and Non-Permanent Active Militia (NPAM). BGen Denis Whitaker recalled the fear when militia units were to be inspected by PF officers. There wasn’t a solid relationship pre-war though this, he said, largely disappeared after 1939. Training was generally at a low level–platoon, company, and battalion and occasionally at brigade.

On leadership
Whitaker was sent off to senior officers [ie batalion commander] school in late 1943 where instructors were top-notch UK people. This was the first time he learned what was required and how to get the best use of equipment available. Most Commanding Officers had no idea of their jobs. A battalion was the largest unit that could be motivated by one man. A good Commanding Officer could move them and develop loyalty and pride. All a commander could do was to do everything he could to ensure success–plan, support, use equipment to best advantage. You knew there would be casualties but you had to make yourself go ahead.

On Major General John Hamilton (Ham) Roberts D.S.O. He was placed in command of the 2nd Canadian Infantry Division during the disastrous Dieppe Raid. He was awarded the Distinguished Service Order for his actions. Roberts was a damn fine soldier who was put into a difficult spot. He was not responsible for the raid’s planning. He had saved his guns in Jun 40 and got promotional rewards. He had never commanded infantry before he became 2 DIV GOC, nor had he gone to Staff College. There were no divisional exercises under him. Whitaker got to know Roberts well after 1945 when both were at Aldershot. It was too bad the media crucified him because of Dieppe, largely because of the “piece of cake” reference which (though Roberts claimed not to have said, he and at least l other officer heard at a briefing on 27 Jun). Whitaker said the plan for the operation was “outrageous” with objectives impossible to achieve. Neither he nor Roberts had any sense of what could be done, but then General H.D.C. Crerar, General Andrew McNaughton and General Sir Alan Brooke (all artillery) ought to have known how much firepower was needed to get troops ashore. Roberts could have refused to carry out plan, but he told Whitaker that if he had someone else would have taken over and done it. He was the scapegoat and had a rough ride.

On Lieutenant-General Guy Granville Simonds, C.B., C.B.E., D.S.O. (RMC 1903)
He was a knowledgeable, professional, good soldier. When Whitaker met him he was called by first name. He had drive, enthusiasm, and wanted to be a complete soldier. He had done well at Staff College. He was tough and cold. No one made too many stupid mistakes under him. Soldiers respected him. He was prepared to take casualties to achieve an objective and thus save lives overall.

On Gen Charles Foulkes. He was considered a good diplomat but few thought him a good tactician. He was very good to Whitaker. On one occasion Foulkes wanted to put Whitaker, after being wounded, in command of S Saskatchewan. Whitaker argued he should go back to RHLI and Foulkes agreed.

On Major-General Harold Halford Matthews (RMC Commandant 1935-8; Adjutant-General 1939-40). He  came from the NPAM. He worked out because he was very intelligent and had an excellent personality. He could delegate. He was solid, thoughtful, had the men’s best interest in mind, and was level-headed. He wasn’t a driver like LGen Guy Granville Simonds though he got on well with him. He rose due to a combination of luck, right time, and ability.

On General Henry Duncan Graham Crerar, PC, C.H., C.B., CD, ADC (RMC 1909); RMC Commandant 1938-9: Gen. Crerar was a warm person who, because he came from Hamilton, was very good to RHLI. He was a courageous commander who came to the front, something that was not the norm in an army where most operated on the map only.

On Major General Rodney Frederick Leopold Keller (RMC 1917). He was known at RMC as “Blood” where he had been infantry and drill instructor. He was not highly regarded by his division’s men. He was thought to be a drinker too.

816 Lieutenant General Kenneth Stuart C.B., D.S.O., M.C. (RMC 1911) was a person he had known and liked at RMC. Stuart got the Canada-US football game in London in l944 underway, even getting the team a barracks and 6 weeks to prepare for the game on 13 Feb 44.