Skip to content
14 Apr 2009 / Catching Up With the News, What's Happening At RMC

From an NCO to an officer

MILITARY: More non-commissioned personnel are heading back to university to get a mid-career degree at Royal Military College 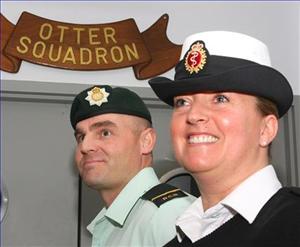 Whether by choice or economic necessity, more people are going back to university in midlife.

For members of the military taking a mid-career degree at Royal Military College, it’s much the same experience as at a civilian university: They’re grappling with schoolwork 20 years after last cracking open a calculus text and attending classes with cadets young enough to be their own kids.

For those in Otter Squadron, which is composed of personnel from the ranks who will receive their officer’s scrolls upon graduation, attending RMC comes with a different set of challenges.

They can no longer visit the messes where they spent years as non-commissioned officers. Their long-time military colleagues must call them sir, at least in public, and they have to rid themselves of old leadership habits. Officers are expected to delegate and supervise, whereas the NCOs were more hands-on.

“It’s kind of like being a recruit all over again,” said first-year officer cadet Chris Desilets, who spent 16 years as an infanteer in the Royal Canadian Regiment, rising to the rank of warrant officer after joining the army just weeks following his graduation from high school.

“It has had its moments,” he said of his new rank.

“I went home for a funeral recently and it was a little bit awkward. I’m still not used to being called sir.”

Similarly, naval cadet Renee Konigs had risen to the rank of sergeant when she entered the competition to land one of the few first-year appointments for serving members at RMC.

“I had been taking university courses on my own time, but it was taking a lot longer than I would have wanted, what with work and family and the promotions along the way,” said Konigs, who will graduate next month and take up an administrative post with the CFB Kingston base hospital.

“I had gotten a bit stale in my career and I saw this as a chance to do something different, so I jumped at it.”

There are currently 56 cadets in Otter, which is named after Gen. William D. Otter, who is considered Canada’s first professional soldier and commanded troops in both the Riel Rebellion and the Boer War.

That number will more than double in the coming years. Because the older cadets live in the community, they don’t have to be housed or fed at RMC, making it the most cost-effective way to produce new officers.

The only distinction between them and the rest of the cadets is that the Otters wear the daily uniform of their element — army, air force or navy — rather than the RMC cadet uniform.

Privates come and captains go but NCOs, usually being lifers, are seen as the institutional memories of modern militaries. Once they get into the officer corps after going through RMC, Otters advance to the mid-level ranks of “captain” and “major” more quickly than the younger cadets due to their previous service.

They typically also get marks 10% higher than their younger classmates, which is common for mature students who come to school to learn and not to party.

“I’m not saying they’re 10% smarter than the rest of the cadets, but they’re focused and they’re disciplined,” said Naval Lt. Gary Jackson, the squadron’s commanding officer.

“And we ask a lot of them — we require eight hours of their day here, then they have to go home and they’ve got another six or seven hours of study to do. Meanwhile, they’ve got the family stuff going on, hockey games and piano lessons and everything else, and it is really tough on their families.

“It is hard and their progress is measured — we are taking a tremendous amount of gravel and packing it into an eight-pound sack.”

They are also a steadying influence on young cadets, as the Otters have years of practical military experience under their belts and can counsel the young cadets on the proper way to do the military drills and procedures.

At the school’s parades, for example, the Otters’ drill stands out as it is absolutely flawless.

Both Desilets and Konigs turned down the chance to get their degrees at a civilian university, choosing instead to come to RMC so they could remain in the military during their studies.

At a civilian school, all they would do is study, although they would still be considered members of the military.

At RMC, they are required to take part in the same four pillars as the rest of the cadets: academics, sports, bilingualism and military training, although the latter is already second nature to them.

“I didn’t want to be released into a civvie university where I would struggle all by myself,” said Konigs.

“I wanted to come to RMC, and while I had a few, ‘Oh my God, what have I done?’ moments when I started, I’m really glad I came here. You grow so much, not just as a member of the military, but as a person.”