The following is an account from IV OCdt Jeremy Whalen 24912 who attended the 14th International Cadets’ Conference in Yokosuka, Japan from the 3rd to the 9th of March. OCdt Whalen departed Japan less than 24 hours before the devastating earthquake hit the country.

I recently returned from the 14th International Cadets’ Conference in Yokosuka, Japan hosted by the National Defence Academy of Japan. This annual event is an opportunity for cadets from a variety of nations to come together, discuss world issues, and experience Japanese culture. This year was a weeklong blur of conference sessions, cultural experiences, and international friendships with 20 cadets representing 17 countries.

I arrived at the National Defence Academy late in the evening of 3-March-2011 and said some quick greetings before settling in for a night of sleep after nearly 30 hours of travelling. Somewhere in the events of the evening, I missed the fact that reveille was at 06h00 and involved a trumpet blast, loud Japanese music, and shirt-less cadets formed on the parade square rubbing warm towels on themselves to fight off the cold. Day one was off to quite the start. We spent the afternoon touring the various clubs offered at the National Defence Academy and I received a short lesson in the art of jukendo from my host. 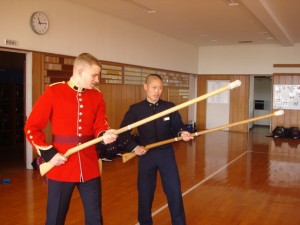 From that point on, my trip was filled with new experiences. My hosts, IV Takashi Oki and III Rytua Hoshida gathered several foreigners together with their respective hosts and set off on a weekend adventure that included visits to Asakusa, Yokohama, Tokyo, Yaskuni Shrine, The National Museum, Kamakura, and the Imperial Palace in Kokyo among many others. During these trips I was exposed to many Japanese foods and cultural traditions. Whether it was by sampling local takoyaki (fried octopus), indulging in the traditional Japanese bath experience at Sky Spa, or reading my fortune from omikuji, my list of new experiences flourished. Another highlight included successfully defeating Midshipman Adam Calloway from the United States Naval Academy in a heated international MarioKart contest. 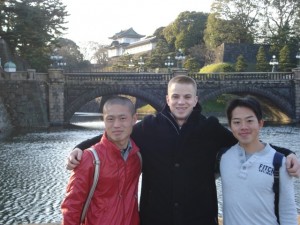 On tour in Kamakura. Construction of this bronze statue of Buddha began in 1252. In this photo are cadets from Canada, the United Kingdom, Germany and the US Naval Academy with their hosts from the National Defence Academy 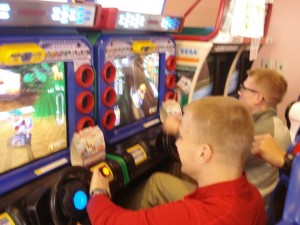 After an exciting weekend of exploring Japan, the conference participants settled in for two days of discussion on the topic of The International Security Environment and the Cadet. The conference started with remarks from Lieutenant-General Takashi Watanabe who addressed three central questions; what are military forces and cadets in our countries, what are the diverse roles of our militaries and, what should cadets acquire at military academies to prepare them for these roles. Participants brought varying perspectives on these issues and debated them at length in the ensuing discussion sessions. Cadets from the Philippines spoke of the skills required to win the hearts and minds of their own population in a country fighting against extremist networks inside its borders. In contrast, cadets from Tunisia spoke about the military’s role during a revolution – a unique and highly relevant topic in light of recent events in Northern Africa and the Middle East. Our experiences were certainly vast and our discussions enlightening. 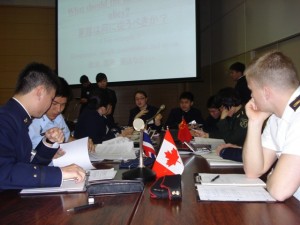 The conference and discussions ended on Wednesday, 9-March-2011 , with an international soccer match and a performance from a Japanese opera singer whose renditions of Ave Maria and Nessun Dorma were inspiring. (Sports fans will be happy to know that a combined team of players from Europe and Canada successfully defeated a team of cadets from Asia and the United States 2-1 in the international soccer match. Despite having strong talent from the European nations, the Canada/Europe side relied on two critical goals from the Canadian to carry them to the win.)

This trip was whirlwind tour of Japanese history, international politics and various cultures. It provided me with new friends in militaries around the world and gave me a new understanding of how Canada fits into the global community. The only question now is; how soon can I go back? 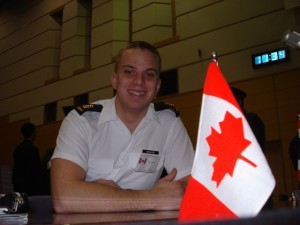 Note: Shortly after my departure from Japan, a severe earthquake struck the nation followed by violent tsunamis. The National Defence Academy felt the shock but remained undamaged as it lies in the southern portion of the main island, away from the epicentre and most significant flooding. However, many cadets are still awaiting word from their families who live in the northern prefectures. Thoughts and prayers for those cadets, their families and their country would be appreciated during this time.

I missed the quake by less than 24 hours. I am certainly feeling very fortunate but a little strange. It’s very odd to have escaped such a disaster. My friends are okay though so that is encouraging.