The Royal Military College Saint-Jean Military Skills team (MilSkills)  is a representative team composed of arguably the 20 most motivated and fit students from the College. The team trains every week for two hours on Monday and Thursday nights, as well as a number of weekends. As the team name suggests, military skills are the focus of our training. We will all become familiar with moving on water with the assault boats, or crossing pieces of land that require traversing techniques to safely carry people and equipment over obstacles. In addition, members of the MilSkills team must master the arts of stealth, camouflage, observation, and reconnaissance, necessary for all activities and operations. Repelling, marksmanship, navigation, and knot work are just some of the practical skills mastered by all members of the team.  Our training grounds are open to the imagination, but primarily consist of the College grounds, the Canadian Forces Leadership and Recruit School, and the Farnham training centre.

The MilSkills team is run by two very dedicated individuals; Second Lieutenant Dionne and Sergeant Cameron – both very experienced members of the R22eR –  and are responsible for the high level of training we receive. Each week, we are faced with new missions and scenarios developed by the staff, and must work as a team to achieve the goal of each tasking – whether it be moving a 180lb ‘dummy’ over the 12ft wall, or traversing a river with all the teams equipment, each member is tested physically and mentally. The goal of MilSkills is to field two competitive teams to compete in the RMC of Canada in Kingston Sandhurst trails – a course based off the actual Sandhurst competition in the United States. As an aspiring leader, the MilSkills team and the Sandhurst competition could prove to be one of the most challenging exercises one will carry out in their career in the Canadian Armed Forces. As a result, the principles of leadership, physical fitness and military skills are all put to the test – many of the factors that lead to success at the Royal Military Colleges.

The RMC Saint Jean Military Skills team members of Bravo section receive orders for a mission that took place on Monday the 22nd of October at RMC Saint Jean. Effective communication and planning is essential for each training session. 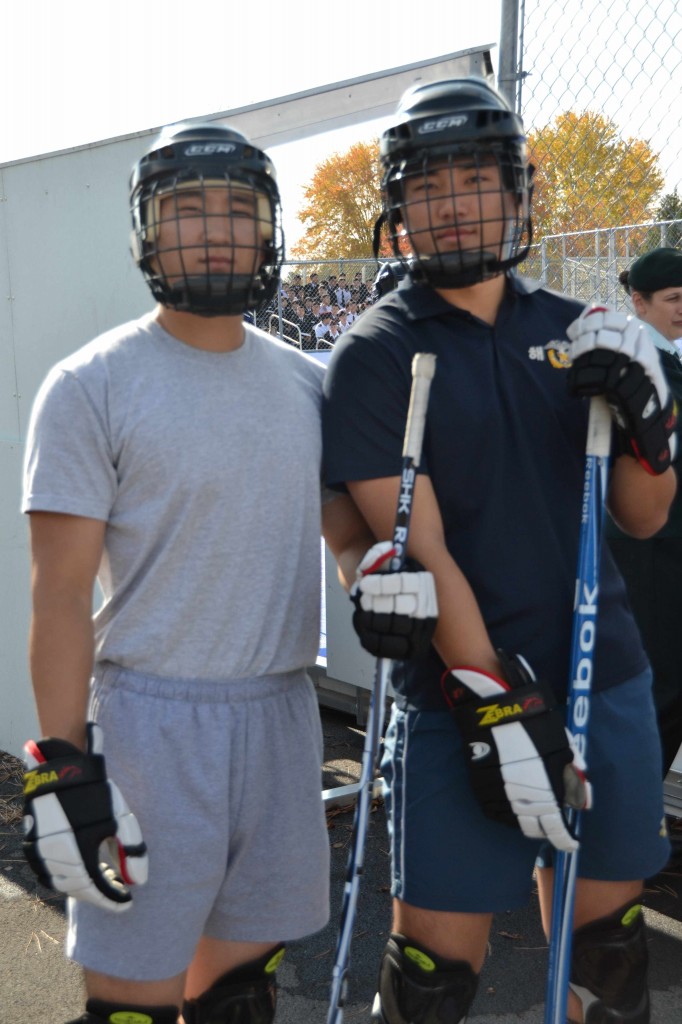 On Tuesday, 15th October 2013, we had a visit from the Delegation of Republic of Korea (ROK). Along with them was the ROK Naval Academy, an institution very similar to Royal Military College Saint-Jean (RMC Saint-Jean). As a Korean descendant, it was very exciting to see my culture’s military force here at RMC Saint-Jean. Not only were the ROK forces famous among the Koreans for their conscription law, but the fact that each individual candidate of the ROK Naval Academy shared a common theme with us was very interesting –attending the academy by choice. Luckily, I had the opportunities to speak with few of those candidates to be further aware on their system. The rank structures are almost identical to the Canadian Armed Forces, separated into NCMs and Officers; in addition, the progression of the rank structure is quite identical, having almost the same amount of ranks in comparison.

The candidates I had the opportunity to speak to  were 4th year Cadets that are on their last year at ROK Naval Academy. One thing that was different in relation to the RMC Saint-Jean was that the ROK has several academies all split into respected elements.  Unlike RMC Saint-Jean, where all elements of officer cadets are trained, in ROK  they are separated into their own elements right from the beginning.

Other than casual conversations in Korean, joking and sharing small stories of our lives here at RMC Saint-Jean, it was just small talk on how the experience of ROK military was like. According to the 4th years, the experiences in the ROK Naval Academy has definitely changed since our parents’ time; which surprised me, knowing that as a kid I knew I had to one day serve in the ROK Forces, because the stories from my father and uncles were frankly more frightening.

In regards to their military training, the ROK Cadets expressed that it is just like any other military force, harsh in training and consisted of restricted freedom. In addition, other than just communicating verbally, we had the chance to teach them a very popular sport in Canada – street hockey. At first they expressed that they have never played the sport in their life and it is not a sport played very much in South Korea. However, at the end of the game, the ROK Cadets quickly picked up the basics of the game, showing their athleticism and sportsmanship which I was very pleased to see.  Overall, the experiences shared with the Korean Cadets from the ROK Naval Academy were excellent and I was very happy to be provided an opportunity to be with them.