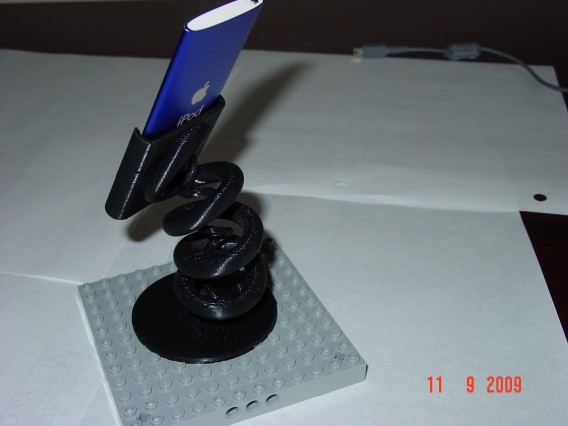 “With the Dimension 3D printer, it’s easier and faster to print the prototypes compared to our older rapid prototyping machine,”

Ask an engineering student at the Royal Military College of Canada, “What did you do in class today?” and you may be surprised by the answer.

“I redesigned the hull for a naval vessel” would not be an unusual response from these distinguished students.

Established more than 130 years ago, the Royal Military College of Canada (RMC) located in Kingston, ON, has a long history of providing students with first-rate bachelor and graduate degrees in the Arts, Sciences, Military Arts and Sciences and Engineering, preparing them for challenging careers in the Canadian Forces.

For the College’s Mechanical and Aerospace Engineering programs, this means working hard to provide its students the latest technologies in the engineering field. In pursuit of this goal, RMC’s renowned engineering department added the latest 3D printing technology to its capabilities. This has greatly assisted students in the design and evaluation of engineering projects, utilizing a tool-of-the-trade it considers essential for tomorrow’s engineers.

Seeking a quality, economical 3D modeling alternative, RMC purchased the Dimension model 1200es. What they’ve found since the purchase is a 3D printer with the speed, accuracy, reliability and large build envelope necessary to meet the rigors of its engineering department.

In RMC’s Marine Systems Engineering course, the students design a ship’s hull using Maxsurf software. A prototype of their hull is printed from the computer-aided design (CAD) model and tested in a towing tank to measure the ship’s resistance to move through the water. This information is then used to calculate engine power requirements and select an appropriate propeller for the ship.

In the Engineering Graphics course, students must design and print a desk organizer that fits onto a Lego plate. The students’ designs – which can be anything from an MP3 player holder to a penholder – are bound to size, functionality and aesthetic constraints.

Students import their CAD model and print 3D prototypes using the Dimension 3D printer. Lieutenant Lachance has found this project to be extremely popular with students as it allows them to physically see the results of their design.

Due to the advantages found from the use of the Dimension 3D Printer, Lieutenant Lachance now plans to introduce this technology into his upcoming CAD-CAM course. Additionally, the Dimension 3D printer is being employed for the creation of multiple training aids and demonstration items for numerous courses, enhancing visualization and understanding of academic material.

In his Aircraft Design course, students use CAD to create a model of an aircraft. The students then use the Dimension 3D Printer to produce prototypes giving them the ability to quickly visualize the overall design and implement design modifications during the evaluation process.

Previously, Dr. Perez and his students relied on two-dimensional computer screen models during the design process. “From a mechanical design perspective, using the Dimension 3D Printer has become a great motivator because students can better visualize their designs.”

The Dimension 3D Printer has been used as well in the Aircraft Stability and Control course to develop experiments for wind tunnel testing to evaluate aerodynamic performance and stability characteristics. Now in the fifth iteration of the experiment, Dr. Perez sees tremendous value in this technology for his students.

Both the mechanical and aerospace programs have the capability to produce metallic prototypes using numerically-controlled machine tools. However, the time and cost associated with this procedure were far too excessive for the amount of models currently being produced. “With the entire experiment printed in ABS plastic, it takes only hours to replace a part, as opposed to days with the more costly alternatives,” said Dr. Perez.   Source