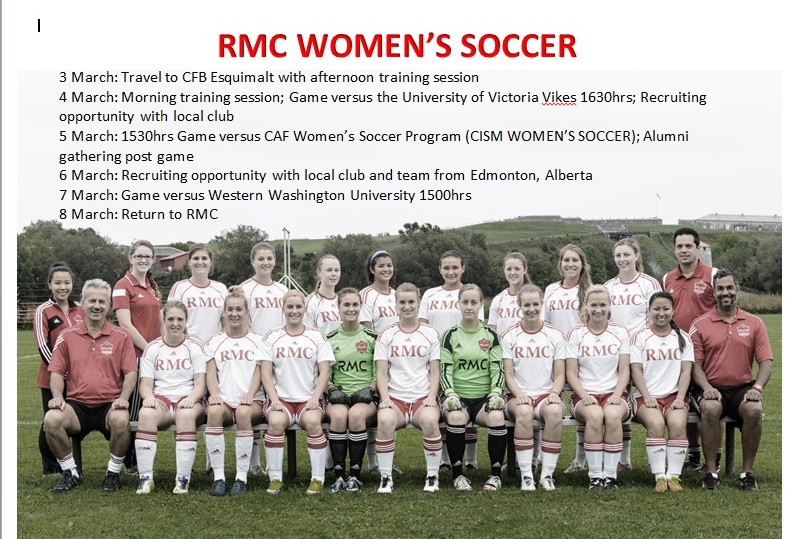 The Women’s Varsity Soccer Team left for Victoria British Columbia at 0230hrs Tuesday March 3rd. After a full day of traveling, they finally reached CFB Esquimalt eager to play soccer. The team trained that evening and then enjoyed the sunset and water from the Esquimalt mess windows during dinner. 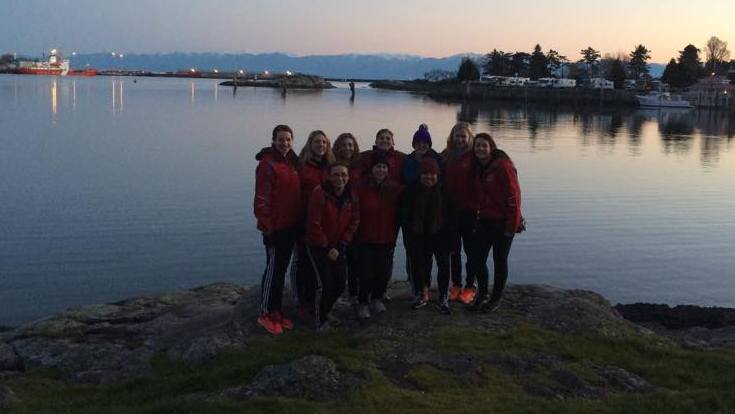 The RMCC Women’s Soccer team became settled with the grounds of the base in Esquimalt. They had an early training session to stretch out their legs and get moving around. Worked on team strategy for the upcoming game later on that day against University of Victoria. The team suffered a loss but played hard until the end. With only 14 able bodies to play, it was a rough start but this loss wouldn’t affect the team’s fight for future games. 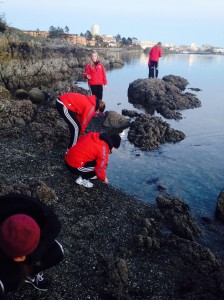 First of all, Happy Birthday to third year Alex Childs who celebrated her birthday playing against the trialist for the CAF Women’s Soccer team (CISM). RMCC came out strong and played well throughout the entire game. Alex Childs had the only goal for RMC. The CISM team scored to tie it up on a penalty kick leaving the game at a 1-1 tie. Our team performed well and achieved their goals they set out before the game.

Friday March 6th was finally a break for the girls. Celebrating the birthday of 2nd year Mackenzie Brauer and after two hard fought games, the girls got the day to study and do some sightseeing in Victoria. The temperature was 130C and was a perfect day to go on a walk by the water and do some shopping. However, the team was anxious for their game the next day against an NCAA division two American school.

The last day of competition and also celebrating the third birthday of the trip, 1st year Alura Castle. The final game of the trip was against the University of Western Washington, an elite team from the United States. After the success of the previous game the RMC paladins walked in with confidence and intensity ready for what the US had to offer. Unfortunately the outcome was not anticipated and ended in a 2-1 loss for the RMCC women although it was a very tightly fought game that could have gone differently with the raise of a flag. It was a bitter sweet end to a great week of laughs, sweat and sun.

After a week of fun, competition and training the RMC women’s soccer team was ready to head back to Ottawa. Leaving the sun for snow was not easy, and after such a great week it was sad to leave. With two losses and a draw the women tried their best and will hopefully be given the opportunity to participate in western competition again in the near future. 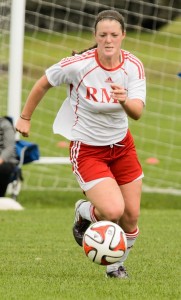 Thanks to the generous donors to the RMC Foundation for making this opportunity possible. This unique experience to train and compete outside of the OUA schedule enhances the quality of play for the team. The OCdts are challenged to meet the demands of adapting to a new environment and are mentally tested to cope with achieving their performance goals against unfamiliar opposition. It also allows those who may know little about RMCC or the Canadian Armed Forces, a look into what our institution and work force are about through the sporting window. We know we have done everyone proud!

“The trip to Victoria, British Columbia was an amazing experience that allowed the RMCC women’s soccer team to build teamwork and cohesion as we spent our time traveling, goal-setting and living together for the 5 day trip. As a third year Cadet at RMCC this trip gave me the opportunity to speak with recent graduates of RMCC and alumni of the women’s soccer varsity program who opened my eyes to the opportunities available in the CAF upon graduation. Additionally this trip gave us a unique recruiting opportunity and a chance to showcase to western Canada what the RMCC sports programs and the CAF has to offer.”