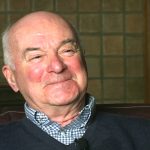 Colonel (Ret’d) Robert S. Peacock went into the army in June of 1952. He served in Korea as an infantry platoon commander with the first and third Battalions PPCLI, then served on the mobile strike force doing arctic parachute jumping. He commanded a battalion in Germany and went to Vietnam. He was also in Vienna with the Mutual Force Reduction Conference as the Canadian military representative. In between he was Vice-Commandant at Royal Roads Military College and was directing staff at National Defense College. The following are excerpts from an oral history interview held in 2008 where Robert describes his Royal Roads cadet and staff experience to Royal Roads University oral history coordinator, Karen Inkster.

After being told he was on the waiting list, it was late summer 1948 when Robert Peacock received a telegram telling him that he had been accepted to enter Royal Roads’ first tri-services class. As he described it, “I got out of the ditch I was digging for the Hamilton Waterworks and went and cleaned up my kit and said goodbye to my ditch-digging buddies and got my kit together and came to Royal Roads. My father I think was extremely pleased and I think my mother was too but they weren’t very emotional about that sort of stuff. I was going to go and do my own thing anyhow and glad that the government was paying for my rations.”

“This was the experience of a lifetime to come across the country for the first time. I’d never been west of the state of Michigan. So this monstrous trip, for four nights and four days, crossing the country was a real eye opener. Enjoying the scenery and meeting a lot of other guys who were coming, doing the same thing, not knowing what we were doing but the bonds of the class were formed right then. Then coming into Vancouver early in the morning we were taken over to the docks underneath the Lions Gate Bridge where the navy had three destroyers tied up and we were marched on and we all wore suits or blazers and flannels and that sort of stuff – that’s the way teenagers dressed in those days. Carried our bags on board and came out through the Lions Gate, crossed the Straits of Juan de Fuca, through Active Pass, then around into Esquimalt Harbour, and trucked by those cattle trucks, out to Royal Roads to start our life as cadets. A fantastic journey and weather was just absolutely perfect right across the whole country, right through across the straits into Victoria, I fell in love with the place.”

Q. Then what happened when you got here?

“Oh when you arrived here of course there’s the nasty seniors, the senior cadet officers were waiting to exercise their new found command responsibilities and they quickly got us sorted out. We were issued new sets of equipment and got on with it. Then everything from then on was at the double. From the time you came on that parade square in the morning you were doubling and you didn’t use the Neptune stairs as a recruit, you doubled around the circle. You doubled everywhere. It was hell – we were 18 – fit – that didn’t bother us.” “The rules of the college and the whole service college system, you paid your way through. I think the first year was $650 and as subsequent years, about $450. Now that’s in 1948 dollars. I worked in the Steel Company of Canada for two summers, Dominion Foundries for a summer and the year that I was inducted into Royal Roads I was digging ditches for the Hamilton Waterworks, tunnelling and god knows what else. Great practice for my chosen trade of going into the infantry. But no, it was pretty bleak financially for most of us when we were here as we didn’t get paid other than the five cents a week that they doled out of our own money…didn’t seem to matter. It was a very good educational deal for anyone who was trying to get into the armed forces and be commissioned. The bad luck of mine is that the year I graduated from RMC they started paying cadets the following September so I missed out on four years of paid allowances.”

Q. So what kinds of skylarks did you do?

“Oh a skylark was a good way of showing term spirit. Skylarks could be bringing sheep up from the lower pasture and herding them into the upper grounds or putting them onto the parade square in front of the Grant Block – something of that nature. Or going out and having someone blow bugles all over the night and disappear into the woods – people rushing around trying to find out what’s going on. And raiding the kitchen – I guess it’s now where you have your little café up there – well that was our mess hall and the place was locked up tighter than a drum at night, see, because cadets have a gargantuan appetite and at night you would receive jugs of kye and great big biscuits about 9:30 at night but about 11 o’clock or 12 o’clock some people decided to slip out of bed and sneak down and open up the kitchen. And they had various ways of taking the screws out of the locks and taking the whole lock system out and getting in and indulging in milk and god knows what else which was in on the shelves and then replacing all the screws. Everybody seemed to know what was going on and it was just sort of accepted as just a bit of high spirits and actually it was a very good thing for morale.”

Q. So what were the most enjoyable things about Royal Roads?

“Oh boy… Being on my own. I enjoyed the total disciplined atmosphere. See this stuff doesn’t bother me. I revel in it. And I’m not cowed by discipline. I think most people when you get trained, that’s fine, if they crap all over you, you say, this too will pass and we can have a good laugh about this later on. But the camaraderie of the whole college, including the staff and the seniors and everyone else was very, very good. The professors we had were excellent in training us to be officers – not to be PhDs or something but training us to be officers.”

“Royal Roads grabbed you by the scruff of the neck and put you into a very disciplined atmosphere. They were looking at the total cadet here, not just how you parse sentences or how you did your logarithm tables or whatever, no, Royal Roads was a real change of life for me and I certainly enjoyed every bit of it.” Q. What was it like to come back as Vice-Commandant?

“Absolute, sheer joy, excepting the fact that I knew the changes which had happened. I had also been back as a squadron commander at the Royal Military College in the late fifties, for a year, and I saw the changes that were coming in then and by the time I got back here I could see a tremendous number of changes but the raw material was as good as it’s ever been. It was just a question of coming to grips with what the organization was asking them to do and the changes in society. When I was a cadet if you smoked marijuana, my god, forget it – you might as well walk away. To give you an example, we were supposed to, under the rules, not to have more than $5 in our pocket at any time – or be in possession of more than $5. Drinking was verboten, even when they had a cadet mess dinner they had special dispensation that the cadets could have a glass of wine and so you know this is the type of routine – it was quite rigid – but you learned to accept this sort of stuff. Not to say that some cadets didn’t have their stashed mickey of rye some place at the college or had a case of beer down in the ravine cooling in the stream – that’s fine. But it wasn’t part of the culture. When you came back here there was quite a change in the culture outside the college naturally and the cadets were coming from that culture so you had changes you were going to have to meet here. A few didn’t make it that way, they weren’t able to make the adjustment but that’s show business.”

Q. That would have been a time of quite a bit of social change.

“Oh gosh yes. I can remember the President of the University of Victoria was out here one day and he was having some problems with student demonstrations and he said, “Do you ever have any student demonstrations?” We all laughed and said, “yes, we have one every Sunday morning on the parade square!” (laughs) No, they were a great bunch and Canada’s very well served by them all.”
“Royal Roads is an institution which I feel very hurt that they closed it down as a military education training place because the spirit here is considerably different than what I ran into – and people from the outside will tell you the same thing. People who came out of Royal Roads had their heads screwed on right as far as the armed forces were concerned and really knew what they were going for. It was a great place to be and a great place to have served.”