The varsity fencing program started the year off with a high energy High Performance Training camp the last week of August. Several CISM fencers, potential RMCC recruits and athletes from Ontario and Quebec joined the varsity athletes in this pre-season training. Try-outs were busy with newly selected athletes joining recruited athletes to round out the 2012-13 rosters. The fencing season will finish in mid-May, with top RMCC fencers who qualify to compete at the 2013 Canadian National Championships, to be held in Gatineau Quebec.

The men’s and women’s varsity teams competed at several university competitions including the Queens Open (October), the RMC Team Invitational (November), the Brock Open (November), and the Carleton Team Invitational (January). Since RMCC hosted the 2013 Canada Cup the athletes had the opportunity to compete at one National level event prior to their university championships. It was an outstanding opportunity for RMCC fencers to compete and gain experience against some of the best Canadian fencers including Olympians. The more advanced fencers also participated in competitions and training at various other tournaments and clubs throughout Ontario, Quebec and the USA. RMCC fencers Steven Trainor, Graham Austin, Marion Agier and Steven Morris, also members of the CAF CISM Fencing program, competed at North American Cups this season in Virginia Beach, St. Louis, Milwaukee and Reno. Austin recently won the silver medal at the Division II NAC in Reno in Men’s Epee.

The university season culminated in the two OUA Fencing Championships, which were held in February. The OUA Women’s Championship was hosted by Brock University, where the RMCC Women finished 4th overall in the league, combining their individual and team results to remain in the top four schools. Women’s Sabre and women’s epee teams both won bronze while top foilist, 3rd year OCdt Daniela Moyano, won the bronze in individual WF. Both Moyano and NCdt Marion Agier, 4th in women’s sabre, were named OUA Allstars. The OUA Men’s Championship was hosted by Carleton University where the RMCC men’s team finished 8th overall, dropping from their previous top three standing. The best results came from Men’s sabre who fought hard to win the Silver team medal, with 4th year OCdt Steven Morris leading the way. Both Moyano and Morris were voted MVP for their respective teams this season.

The coaching staff will be busy over the coming months running Cutting Edge Fencing, our community fundraising program, as well as with recruiting opportunities at the Ontario Provincials, the Eastern Canadians, and the Canadian National Championships. Head Coach Patricia Howes will also be coaching Team Ontario at the 2013 Canada Summer Games in Sherbrooke Quebec(August). Coach David Howes will be busy working for the Canadian Fencing Federation (CFF) with the Canadian National Epee Teams at the Junior World Championships in Croatia (April) and the Senior World Championships in Budapest (August). The end of August will hopefully be busy with Pirate Camp and the RMCC-CISM High Performance Training Camp. With a motivated and enthusiastic new leadership slate selected for next season the varsity fencing program will be focused on re-building next year. It will be an opportunity for growth and development of the next generation of talented and hardworking RMCC fencers. 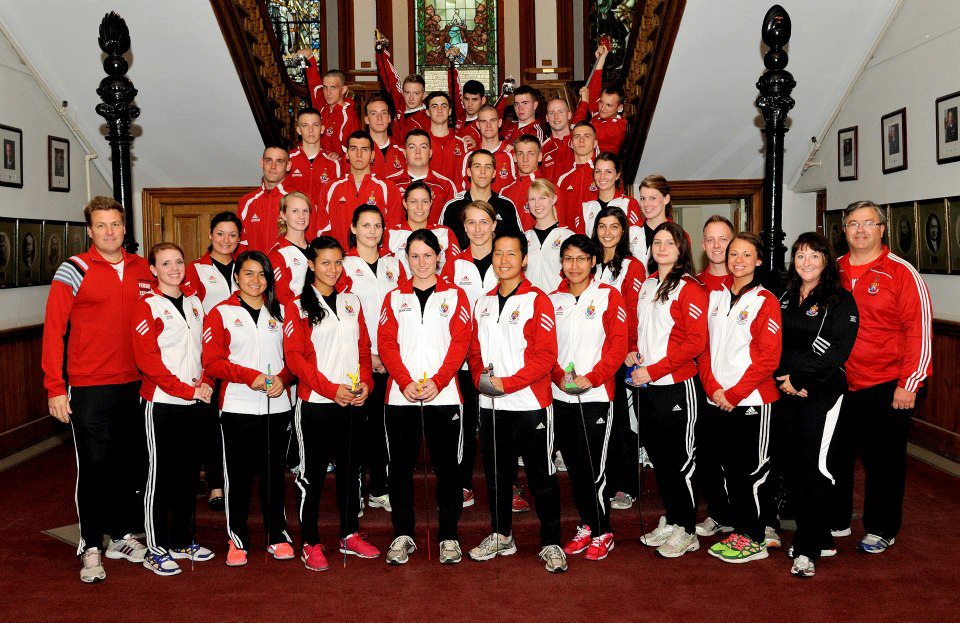 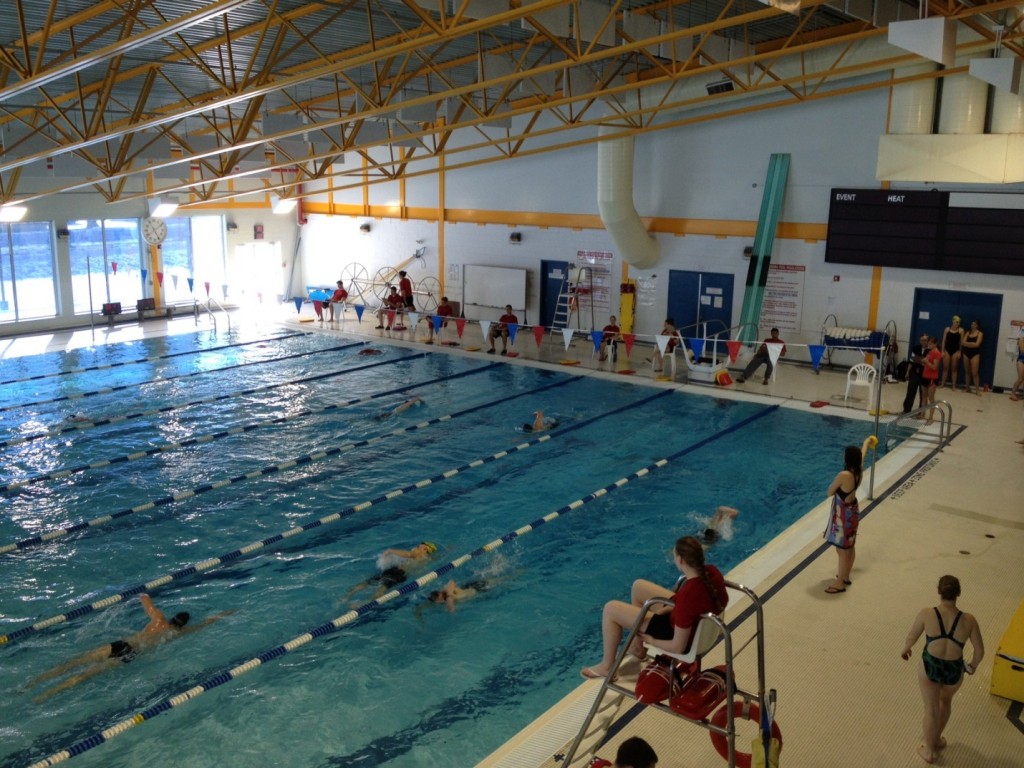 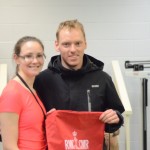 The Triathlon Club hosted their first annual Aquathlon on February 9th 2013. 25596 OCdt (IV) Alida Stockermans, the RMC Triathlon Club President, organized the event with the help of 25926 OCdt (III) Adam Goddard, the Vice-President of the RMC Triathlon Club. The event ran smoothly and was a great success. There were a total of 25 participants from around the area, including RMC Cadets, Kingston Triathlon Club, St. Lawrence College students and much more. Nick Cosman, a participant and club member stated that it was “a very well organized event that went off without a hitch. Congrats to all the organizers and volunteers for a very successful 1st annual RMC Aquathlon!” Adam Goddard, one of the organizers of the event comments, “I had an awesome experience being involved with the planning and execution of a multi-sport event at RMC. I believe it has set the standard for events like this in the future at the College, and look forward to next year!” The success of the event was due to the efforts of 28 Cadets that volunteered their time for this event. The Triathlon Club raised more than $650 which will be put towards their end of the year trip to Florida to compete in the Olympic Size Triathlon, St. Anthony’s on April 28th 2013. 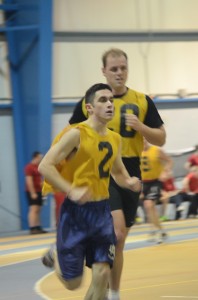 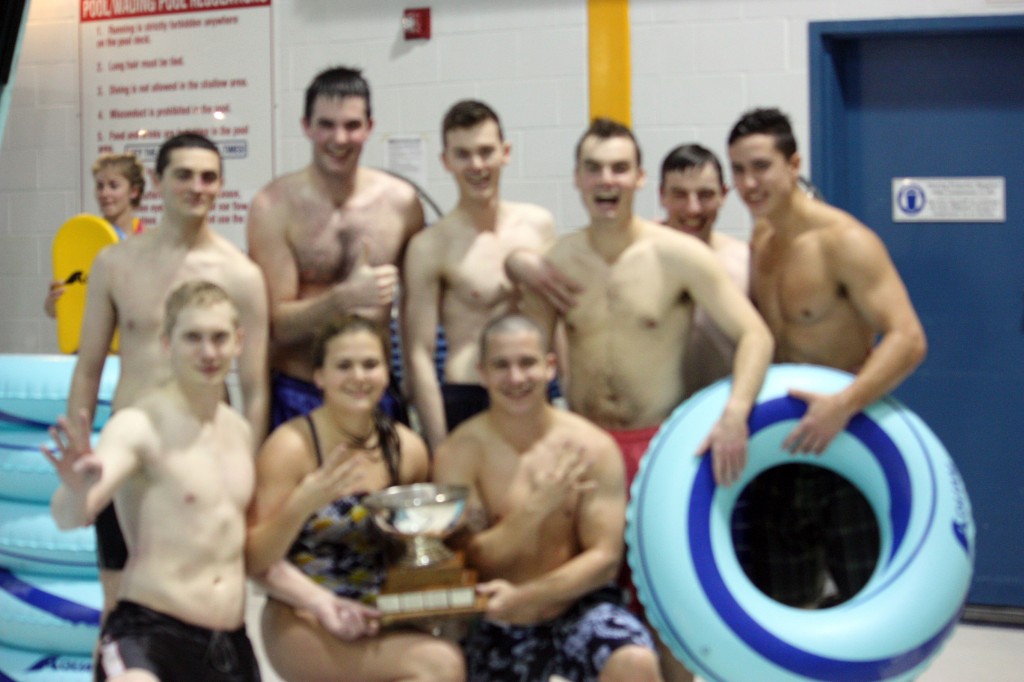 March 21st saw the 2013 Winter IM program come to an end with some very exciting finals. This season OCdts competed in Handball, Basketball, Dodgeball, Ice Hockey and two new sports Flag Football and Inner Tube Water Polo. By the time everything was all said and done 3 sqn was the overall winner of this season narrowly edging out 5 sqn. An honourable mention needs to go out to 2 sqn who was also a very close 3rd place. 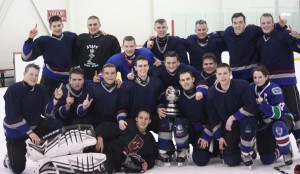 Ice Hockey saw both Tier A & B finals go to a third game in there best of three series. After two highly competitive games C division was able to pull out a comfortable win in both finals to take the title away from A div who had won it in the fall. 3 sqn’s dominance was evident on both the basketball court and the dodgeball court. Both games saw 3 sqn build up a sizable lead that was just too much to overcome. 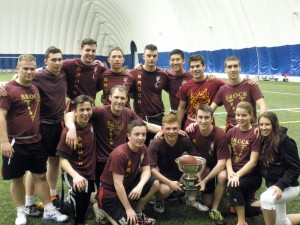 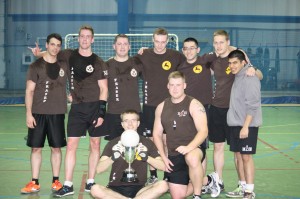 Perhaps the most exciting game of the night saw 7 sqn face off against the top ranked 5 sqn in flag football. The game was back and forth with both teams exchanging multiple touchdowns. It was 34-30 at the half. The second half saw much of the same scoring as the first half did and on the 2nd last play of the game 7 sqn tied it up 54-54. They elected to go for the one point conversion but were stopped by the tenacious defense of 5 sqn prompting the game to head to overtime. In our sudden death overtime defense was the story as neither team could score on their first attempt. It wasn’t until 5 sqn got the ball the second time that they were able to march down the field and put the ball into the end zone. Final score ended up being 60-54.

The most dominating team of the entire Intramural season had to be 4 sqn’s Inner Tube Water Polo team. Never were they challenged in the regular season going a perfect 11-0 placing them as the #1 seed in the playoffs. Their dominance continued throughout the playoffs resulting in a 17-9 decisive win over 5 sqn in the finals. Not to be out shadowed was 12 Sqn’s dominance on the handball court. Most of their victories were by double digits all the way to the finals where they dominated 8 sqn for the victory. 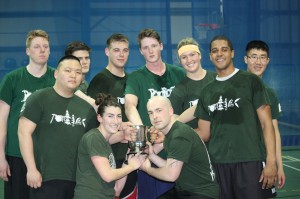 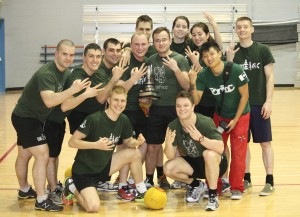 The intramural season would not be as successful without all the hard work of each Squadron’s Sports Officer and the CWIMO Luke Morrison. Their efforts are what make this program effective. The athletics department would like to thank everyone who helped make this a successful season. We are looking forward to the next Intramural season in the fall.

For a complete album of photos and more intramural information please visit, and like, the official RMCC Facebook page at https://www.facebook.com/#!/pages/RMCC-Recreation-and-Intramurals-Loisirs-et-Sports-Intra-muros-CMRC/451329538247187