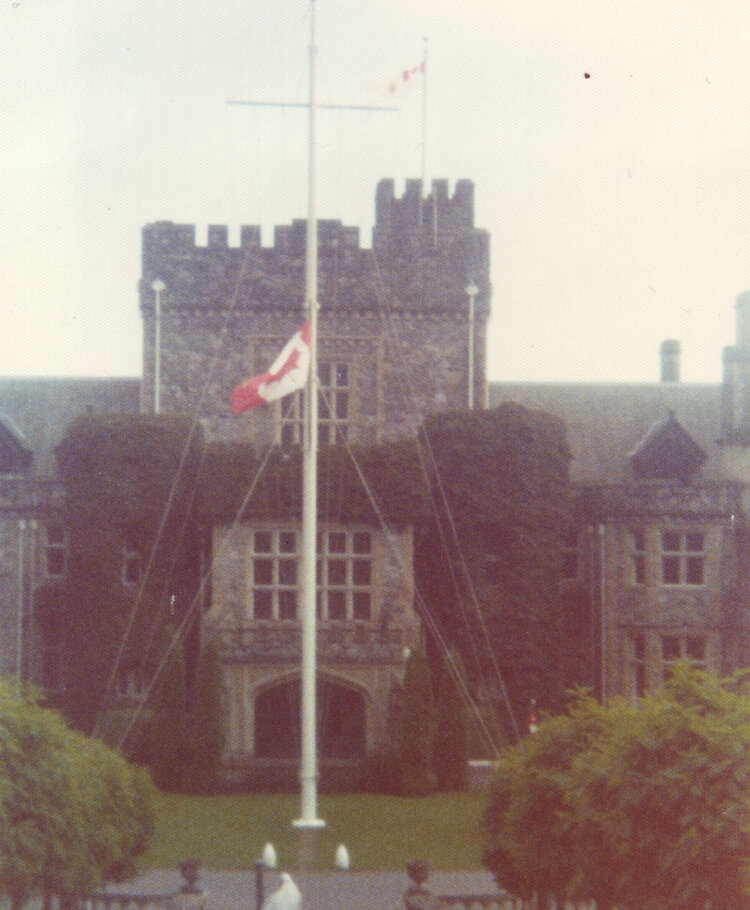 The mast gaff with the Canadian flag and the turret flag pole with the CF ensign.

One of the enduring and ubiquitous things in military life is the concept of Duty Personnel. Not people doing their usual duty, but rather playing a role where they are doing something extra on top of their daily job.   At Royal Roads, that task fell to what was called Duty Flight. In rotation, each of the six Flights would become the Duty Flight for the day.  So, every six days, you became part of Duty Flight and were responsible for all of the roles that position entailed.

Duty Flight primarily was made up of all the first year cadets (or recruits) in a particular Flight, so maybe a dozen or so.  They were responsible for doing such things as security checks of Grant Block; setting up the Quarterdeck for church service on Saturday nights, or taking it down later on Sunday; and of course bringing evening Kye over at 2200 hrs every night to the Junior and Senior common rooms.  Of course, they could also be asked to do just about anything else as the need arose.

In order to organize this, there was also a similarly rotating slate of “leadership” positions for Duty Flight. There was the Duty Cadet Wing Officer (DCWO) which were positions held by senior cadets in the Wing, usually 3 or 4 barmen. They typically were not required to do much, so they were basically just on call to respond if required.

Then there was the Duty Cadet Squadron Officer (DCSO) who was usually from the same Flight as Duty Flight. He was a second year cadet who had to man and actually sleep in the DCSO office at the entrance to Nixon block. He answered the phone; oversaw cadets signing in and out for leave or duty ashore; and supervised the JDCs and Duty Flight.

Finally, there were three Junior Duty Cadets (JDCs) – JDC 1, JDC 2, and JDC 3. They were assigned their role in a rotation so everyone got a turn   JDCs 1 & 2 took turns manning the JDC office in the QM lobby in Nixon Block as well as supervising the tasks being performed by Duty Flight. JDC 3, although a member of Duty Flight, only had one other role, but more about that later.

The DCWO, DCSO and JDC’s 1 & 2 all wore little plastic name tags identifying them as the duty personnel. Their primary duty was to perform the colours and sunset ceremonies. Twice daily (sunrise and sunset) they would report to the mast in front of the castle. The DCSO, along with the designated bugler, would typically come down the Neptune stairs from Grant Block but the JDCs, as first years, were not permitted to use those stairs as a means of avoiding doubling the circular roadway between the Castle and the bottom of the Neptune stairs, known appropriately as the Circle. Instead they would make their way to the Castle entrance via the circle and then when it was time, march in unison along the roadway to the front of the mast. If it was Colours, JDC 1 would retrieve the Canadian Flag from the storage area in the Castle. They were joined by the DCSO and the Duty Bugler. The JDCs would then proceed down the small flagstone path between the two white markers to the mast and take up their positions, eventually both facing towards Grant Block. The flag on the mast was actually flown from the Gaff (the angled beam that came out from the mast) so typically JDC 1 was responsible for either attaching or detaching the Canadian flag while JDC 2 was responsible for operating the halyard. At the appointed time, often after checking with the large clock on the Grant Block tower, JDC 1 would come to attention, and shout “One Minute to Colours, Sir!” (or Sunset), and then stand at ease. Anyone in the vicinity, after hearing this warning order, was required to halt, come to attention and face towards the mast, ready to salute. Shortly thereafter (always less than one minute) JDC 1 would come to attention and shout “Colours Sir!”. The rest of the party would come to attention and the bugler would start playing the appropriate bugle call while the JDCs would raise or lower the flag. Once that was completed, usually timed to coincide with the end of the bugle call, JDC 2 would secure the halyard to the metal cleat on the mast. The DCSO would then order the carry on and if it was Sunset, JDC 1 would return the flag to the Castle and then, along with all the others go about his business.

Now we get back to JDC 3. As mentioned he only had one special job and that was raising and lowering the CF Ensign that was flying on top of the Castle. None of us were particularly fond of this job because of the rumours that the Castle was actually haunted. We would often hear stories of Lady Hatley’s ghost floating through the dark deserted halls of the Castle. Of course, it didn’t help that in the evening the Castle was generally empty of people, that the building was old, floors creaked and radiators bumped and groaned. 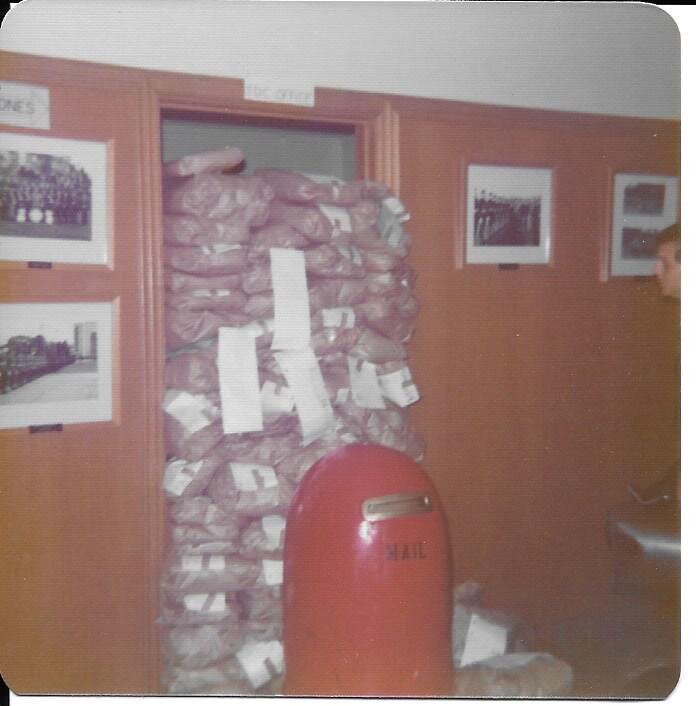 The stack of laundry bundles and the torpedo head mail box outside the JDC’s office!

To get to the turret at the top of the Castle, JDC 3 first had to climb up two flights of stairs and along deserted hallways to reach the band room. Then from there he would take a narrow and dark staircase up to a door that led to the roof. However, from there, he still needed to climb up a steel ladder to the turret where the flag pole was, something that was always a little more tricky in our slippery and shiny dress Oxford shoes. He then had to listen carefully for the bugle at the main mast so that he could raise or lower the flag in unison with the one on the mast. Finally he had to retrace his steps through the now much darker castle. I don’t think there was one of us who was not creeped out by having to go through the upper floors of the castle at night.

Of course, this was Roads, so even the JDCs were fair game for pranks. In my case, I happened to be on duty as JDC 1 on this particular Monday. Of note, Monday was when laundry was returned at Roads and as told elsewhere on this website, “Uncle Claymore” would play havoc with those souls unfortunate enough not to retrieve their laundry in time. On this particular day, though, while I was having dinner, a couple of seniors decided to play a prank on me by collecting all the returned laundry bundles from the cloak room and building a wall in the doorway going into the JDC office. As though that was not enough, they also moved the “Outgoing” mail box in front of the whole mess. This was no ordinary mailbox, having been fabricated from the shell of an actual torpedo war head and so was incredibly heavy.

To make matters worse, this was in the Quartermaster lobby on the main floor of Nixon Block, an “Attention” area for all first years, meaning we were not allowed to talk, had to march at all times and had to behave accordingly in that lobby. By this time, though, we had begun to learn not to waste time on the “how” and the “why”, and just focus on solving the problem at hand, so this was all just a little complication as I figured out how get the door unblocked and the laundry returned to its rightful place.