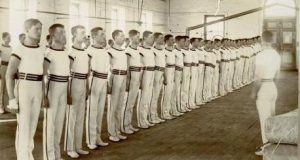 The term “recruiting” as used at the R.M.C. had two aspects.  The first was “fagging” for the senior final year cadets – making up their rooms strictly in accord with regulations, cleaning their kit, and doing any other errands which the senior might order.  The argument advanced to justify this practice was that the senior cadet had major responsibilities for the administration of the cadet battalion which made heavy inroads on his time, and having done all the chores of cleaning his kit and making up his room for the earlier years, he was entitled to relief from this in his final term.

Weight to this argument was given by the fact that according to College regulations, in any other year of the course, if a cadet failed he could repeat it, but if he failed in his final year he was out, and could not qualify for a diploma.  So, in addition to his administrative responsibilities, the senior cadet could not afford to neglect his academic studies.

“Certainly fagging did not seriously handicap the normal well coordinated youth, though it may have been a useful excuse in advance to disappointed parents if he failed his year.”

Fagging at the R.M.C. was criticized by the press as being degrading for young men of school leaving age.  Fagging might be all right for junior boys at prep school, so the argument went, but many of the recruits entering the R.M.C. had been prefects, perhaps captained their school teams, and it was wrong to return them to the status of “fags”.

Personally, I always considered there was not a little hypocrisy to this criticism from the press.

As a high percentage of the recruits came from the “privileged” middle class private schools, in any other context the press would have argued that they were spoiled brats who should be taken down several pegs anyway.  A more reasoned criticism was that a recruit having to fag for a senior cadet, as well as having to maintain a very high standard of his own turn out, so much of his time was taken that his studies were neglected and this resulted in an inordinately high rate of failures in first year.

From personal experience and observations, I would question the validity of this criticism too.  Though certainly there were exceptions, most of the seniors felt an individual responsibility that “their recruit” would pass his year, and if a really thorough analysis was made, it would probably result in a finding that those who failed first year would have failed whether they had been fagging or not.

Certainly fagging did not seriously handicap the normal well coordinated youth, though it may have been a useful excuse in advance to disappointed parents if he failed his year.  We were taught by good instructors, and if a cadet really applied himself during classroom hours and did a reasonable amount of study on his own time, no extraordinary efforts were required to pass.

Lack of application to academic subjects, and time spent “on pass” and extra-mural activities, were far more responsible for failures in the recruit year, than having to work for a senior cadet.  When fagging was suppressed in the final year of our own class, we had all the administrative and disciplinary responsibilities of earlier senior classes without any relief from the barrack room chores of earlier years.

As well as ‘fagging” for a special individual senior there were other regular duties for which recruits were detailed, some being “permanent”, i.e., a single cadet being responsible for the job throughout his recruit year, others being for varying periods.  Usually, a “permanent” detail relieved the cadet responsible from some of the periodic duties.  There was a permanent flag orderly whose role was to raise at sunrise and lower at sunset the flag on the tower of the Administration Building.  There was an “N.C.O.” Room orderly who at reveille every morning had to clean and tidy the N.C.O. (Senior Common) Room, and in the winter months clean the fireplace and reset and light the fire.  He was detailed on a day-to-day or periodic basis.  A “Flat orderly” had during winter months to close all windows of the rooms on his flat and hour before reveille, and waken all cadets, including the seniors, according to individual instructions.  Some of the latter would give orders to be called, say, “fifteen minutes before” reveille and every fifteen minutes until “dress”.  The flat orderly, standing at attention in front of the clock, and leading in unison all other recruits who lined up in front facing him, was responsible for shouting out the prescribed flat calls “reveille, “tattoo”, “last post” and “lights out”, and before every parade “dress” with fifteen minutes to go, “ten minutes more” with ten minutes to go, and “turn out” five minutes before the time for the parade.  The flat orderly had a busy day and extra tours of duty could be awarded for any slip or failure.  A “boot room” orderly was responsible for keeping the boot room clean and tidy and collecting contributions from every cadet on the flat to see that supplies of boot polish were always available.

None of these duties were in themselves unreasonably onerous, and most were necessary in the efficient administration of the cadet battalion.  If they had to be done, it was reasonable that they should be allocated to the most junior cadets – the last joined recruits.  The alternative of providing a permanent staff could have considerably increased the cost of the College.  The objectionable feature was that each of these duties had to be performed meticulously and they offered opportunities to those few seniors with a sadistic streak, to catch out cadets and award extra duties or other punishments.  Inevitably, the least efficient recruits were the most frequent victims.

These duties could not, with any justice, be used as an excuse for having inadequate time to study.  Except for weekends, the period from after supper until tattoo – some two and one half hours – was a silent period for study on all flats and was strictly enforced by cadet company and platoon commanders.