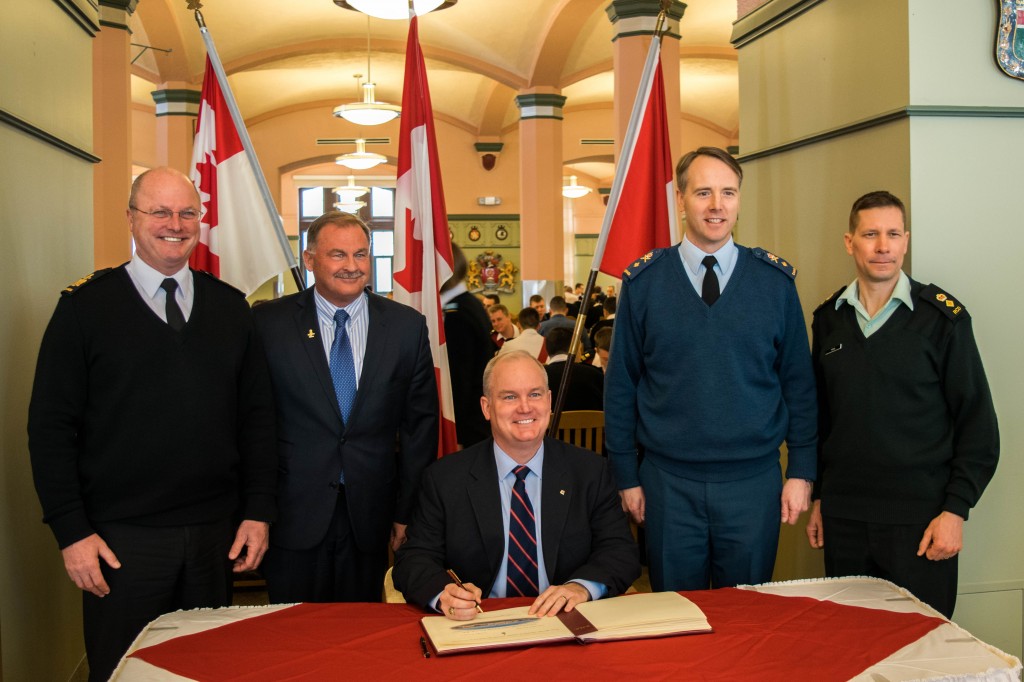 The Honourable 19894 Erin O’Toole, Minister of Veterans Affairs, dropped by RMCC  during a visit to Kingston this past Friday afternoon, 6 March.

The centre piece of his visit was the 5th Annual Salute to Troops Past and Present hockey game between the Kingston Frontenacs and the Peterborough Petes. Minister O’Toole participated in the ceremonial puck drop and a pre-game ceremony that honoured the service and sacrifices of Canada’s Veterans and those who serve today.

While at RMCC, the Class of 1995 graduate highlighted the importance of facilitating a successful transition from military to civilian life during a lunch at the Cadet Dining Hall, with the cadets.  The visit included a short purchasing trip with his wife, Rebecca, to the Gift Shop at Panet House.

The Minister also had the opportunity to visit the Kingston Military Family Resource Centre, an organization that helps improve the well-being of military families in the community.

On Wednesday, 4 March 2015, 99 Officer Cadets, and 21 invited guests, met at the Senior Staff Mess for the Fourth Year Army Mess Dinner. The mess dinner provided an opportunity for the graduating army Officer Cadets to gain an appreciation of army traditions, unit esprit de corps and to promote discussion and an understanding of the importance of mess life and traditions, which contributes to trust and familiarity between officers. MGen J.M. Lanthier, the Commander of the Canadian Army Doctrine and Training Centre, was Guest of Honour, and represented the Commander of the Canadian Army, who was unable to attend. During his address, MGen Lanthier described to the Officer Cadets what they can expect to experience once they join the army; he also described the calibre of Warrant Officers, Senior NCOs and soldiers they will be expected lead.

Photo Captions: Top. A view of the head table at the opening of the dinner