Caption: The past week was very active for the College Team and Cadets as participation in the many Remembrance Day services was provided. The Kingston Frontenac’s Military Appreciation Night Friday (6 Nov) led off the activities with the RMCC Colour Party and members of the Pipes & Drums.  BGen Sean Friday had the honour of dropping the puck for the ceremonial opening faceoff. (terrific Lest We Forget video provided by Kingston Frontenacs – Here)

The Week That Was & A Look Ahead

On Saturday, the Commandant’s Inspection was the result of weeks of preparation. The display of military discipline required the utmost attention to detail, familiarization with regulations, and a high level of teamwork to achieve the pass mark of 85 out of 100. The RMCC Talent Show was held the evening before, but I was unable to attend as I was preparing for this import benchmark in the year. Sunday, Cadets participated in the annual drill and ceremonial competition with foot drill, rifle drill, flag drill, and sword drill being displayed by first, second, third, and fourth years respectfully.

The events of the attacks in Paris are fresh in our minds as officials scramble to figure out what happened and prevent history from repeating itself, much like the deadly Beirut blasts in Lebanon a few days ago, those in Turkey last month, and other similar events that have occurred throughout the world. This segment is not political or predictive in nature, but simply is to express the great sadness felt by myself, and certainly all Canadians, at these tragic events, and to express admiration for the bravery and tenacity of the People of France in light of such a terrible event.

This coming Saturday (21 Nov), the RMCC Bands will be displaying their work over the past few months at the annual RMCC Christmas Concert, which helps raise funds for United Way. The new Bandmaster, Warrant Officer Aldwin Albino has been quite busy facilitating the success of the band and should appear in an e-Veritas interview column in the next few weeks. The concert tickets are $5 ahead of time and $6 at the door. 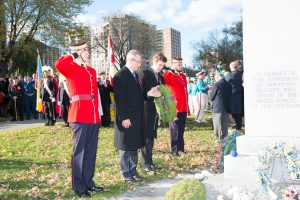 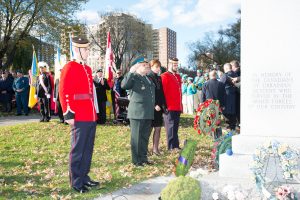 We had a well-organized march of veterans and current serving military members that included a contingent from RMC attended by WO Julian Wieczorek, Officer Cadet Pavlo Besedin and Officer Cadet Yevgen Vazhaylo.

At the Ceremony, there were also members from the federal and provincial governments, including the Consul General of Ukraine in Toronto and the Defense, Military, Air and Naval Attaché of Ukraine.

Thirty-one wreaths were placed at the cenotaph, escorted by the two RMC officer cadets. In addition, the Orion Choir and the Vanguard Marching Band, and a piper from the 48th Highlanders of Canada performed superbly.

Little did the large crowd that attended the Ist Annual Principals Office Talent Show in support of the United Way know in advance that they would be in for such a treat.

Most of best and talented that RMCC has to offer performed in a variety of ways.

There were: songs; beat boxing numbers; blues, folk, and pop music; magic tricks; a sketch of the French comedian Elie Kakou; five piece band; a juggler; reading a piece of original fiction; and an accomplished pianist.

The judges were: Dr Kowal, BGen Friday,  John and Heather Price. Master of Ceremony was the College Chief Warrant Officer, CPO! Keith Davidson who provided both serious & witty descriptions of those who performed.  No one was spared!

*Having met the United Way event target of $2,000.00 thanks in part to the gracious support of John and Heather Price, the commandant agreed to play – a guitar-vocal.  (Rumour has it that if he promises NOT to play next year that the staff & cadets will raise $3,000.00 to keep him off the stage.)

The plan was to have winners named, however, after much internal debate by the two judges they both agreed that ALL the performers deserved a 10.

Consequently there was really only one winner – the United Way!

Special thanks to the principal, Dr Harry Kowal and his staff for organizing a first-class fund raiser.

NOTE: We are still waiting for photos from this event. Once received we will post them. Readers are asked to stay tuned. 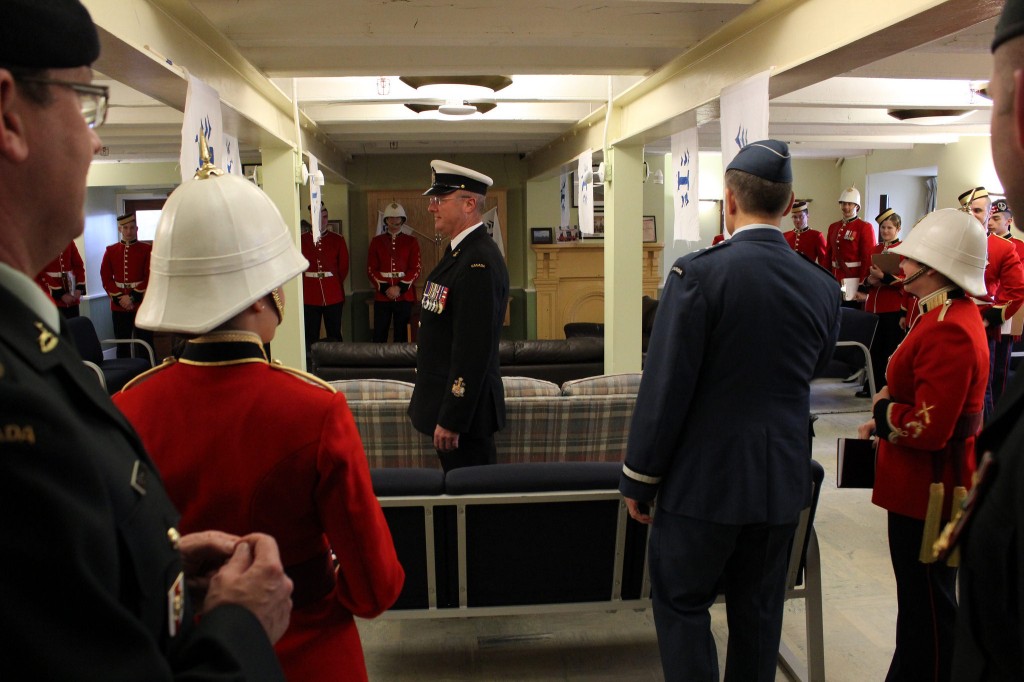 We do not have too much feedback from cadets but we couldn’t help but notice a more relaxed look on their faces once the inspection was over.

Week in and week out since early October, the focus was on the ‘big one’ scheduled for 14 Nov.

No more was the pressure than on the Cadet Wing Chain-of-Command who had the responsibility of making sure that everyone met the required standard and beyond.

We have been unable to receive word on how it went – maybe we will know by our next Issue.

More photos from this Inspection Here

Sunday, November 15th the bi-annual Cadet Wing Drill Competition took place in the Fieldhouse of the Kingston Military Community Sports Centre. The participants ranged from all four years of the college and competed in a variety of different drill movements. 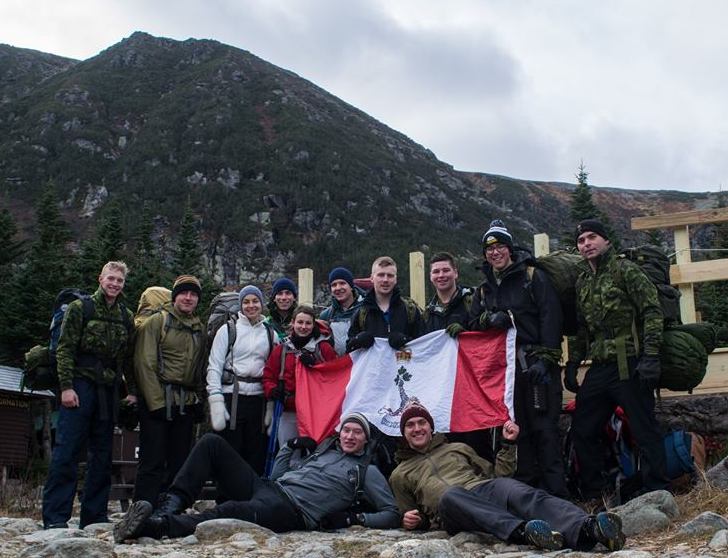 On the 6th of November 2015, the RMC Expedition Club took on Mount Washington, New Hampshire, USA. The RMC Expedition Club is a recreational club that provides students from RMC with the opportunity to explore the outdoors and experience other cultures and environments around the world. Besides Mt. Washington, the Expedition club will also be travelling to other countries including to Chile during the Christmas break and India during the February reading week.

The club, accompanied by Warrant Officer Richard Corneau departed RMC on the 6th at noon. Approximately 9 hours later, we arrived to the bottom of the 1917 meter high mountain, exhilarated to commence the hike. After about an hour of preparing for the climb, we put on our bags and headlamps and began our hike at 2200. About an hour and a half later, we arrived at about a third of the way up the mountain. Since it was approaching midnight, we decided to set up camp for the night in a shelter to get some sleep. 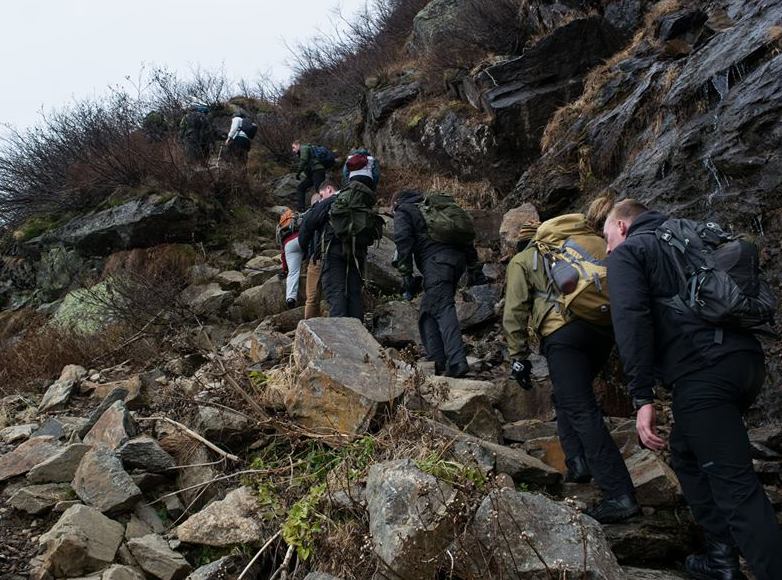 Bright and early at 0700 the next day, we woke up ready to climb the rest of the mountain! Following a big oatmeal breakfast, we took off on our adventure. After about another hour of climbing in the beautiful weather, we got above the tree-line and that is where nature took a turn on us. 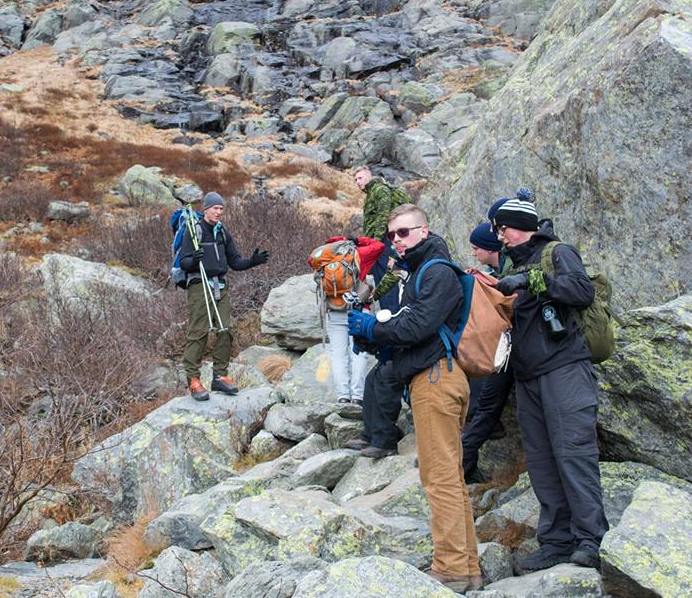 The change at the tree line went from a beautiful warm, sunny morning to dropping below zero degrees with winds that reached speeds of up to 115 kilometers per hour at the summit. Being so close to arriving to the summit of the mountain at about the 1800 meter mark, the high winds and thee freezing temperature became so rough that we almost had to turn around before reaching the top. With only around 100 meters to the top, our summit fever kicked in so we decided to push through the terrible conditions and make it all the way to the top. Even with all of the adrenaline built up in us by reaching the top, we couldn’t stay up there for more any more than 10 minutes as the freezing winds of 115 kilometers an hour were too cold and dangerous to be able to stay at the top for an extended period of time.

After a good hike back down the mountain, we stopped in at a campsite to rest up for the night and departed back to RMC at 0800 in the morning.