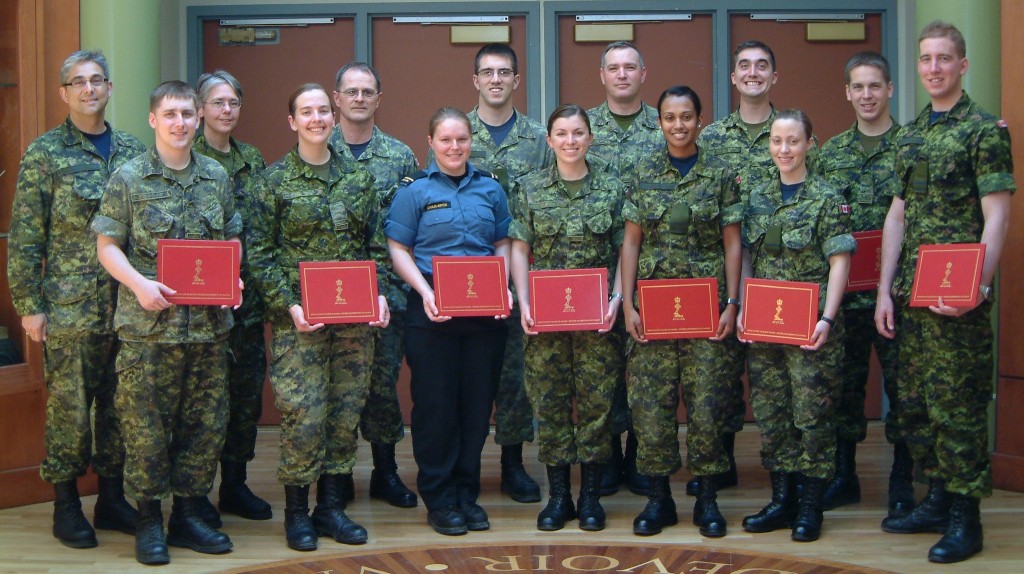 On 13th May, DCdt LCol S Wigg had the privilege to present Band certificate to cadet musicians that give their time and energy to RMC bands for 4 years. 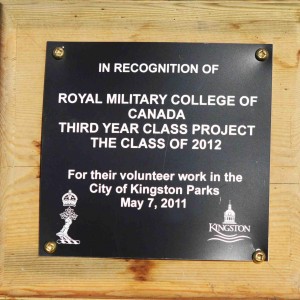 III Years Add to the Beauty of Kingston

With the sun shining overhead, 233 officer cadets from the Royal Military College descended on Kingston’s parks this past Saturday. Their mission: to make Kingston even more beautiful. Under the leadership of 25392, OCdt Joel Benotto, the class of 2012 divided into groups and visited seven of Kingston’s parks. Their work included repainting tables and benches, scrubbing graffiti from walls and monuments, spreading new mulch under play structures, and raking away leaves and branches.

The project gave the third-year class the opportunity to bond while giving back to the city they call home.

As a thank-you to the Royal Military College, city employees held a mid-afternoon ceremony dedicating a tree to the third-year class. The tree can be found at Meadowbrook Park. Rec Clubs Wrap Up Year with an Appreciation Breakfast 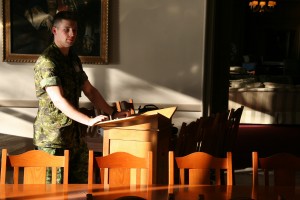 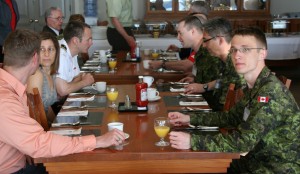 Most of the coaches from the various teams / clubs were also spotted in the crowd. 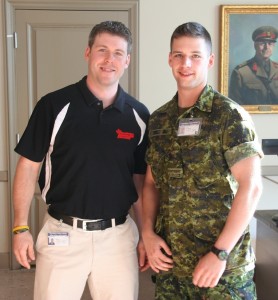 OCdt Cyr handled the MC duties with the style and finesse, at a level, one would expect from a graduate of Toastmasters.

The RMC Recreation Volunteer of the Year was awarded to 24990 OCdt Serena Palmer, president of the Swimming ‘Club. 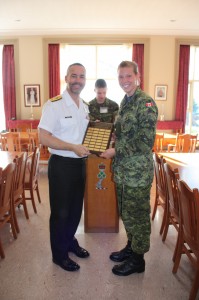 RMCYC competes in the Drexel Cup

On the 6th of May, 2011, the Royal Military College of Canada’s Sailing Team (composed of coach 25231 Jen Bowen, 25745 Alanna Foscarini, 25350 Mitchell Newman, 25157 Nicolas Ouellet, and team captain 25313 Marc Flynn) made the seven hour trip to Philadelphia, Pennsylvania, to represent RMC in an Inter-Collegiate Sailing Association regatta hosted by Drexel University. The racing itself took place on the Saturday, with sunny skies and light to medium winds.

The ideal conditions helped keep the RMC sailors motivated while they got used to the two-person sailboats, known as the ‘Flying Junior,’ or, more commonly, the FJ, along with the sailing area. While our team as a whole had very little experience in the FJ, and even less familiarity with the conditions of the current and geographical wind shifts, we still did remarkably well.

Our A-fleet skipper, NCdt Foscarini adapted quickly and managed to come in first during one race, and 2nd and 3rd in a few others. The B-fleet skipper, OCdt Ouellet also did notably well, especially given his limited experience with helming dinghies, and he was able to place above mid-fleet in several races. Unfortunately, Sunday’s weather was less co-operative and the race officers were forced to cancel the remaining races due to a lack of win. So, after the 10 races conducted by A-fleet and 8 races by B-fleet on Saturday, the RMC Sailing Team placed 7th overall.

Given the great learning experience that this regatta turned out to be, we can all definitely say that we ended the season on a high note, representing the sportsman-like spirit of the College both on and off the water. 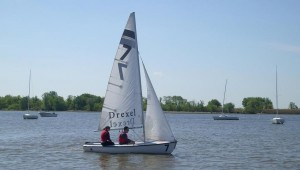 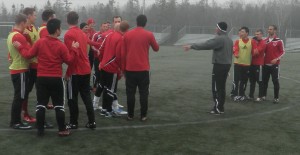 The RMC men’s varsity soccer team woke up on the morning of Monday, May 2nd to the damp, grey fog of Halifax, Nova Scotia and headed to the fields to kick-off their spring training camp. The nineteen players, through the generosity of the RMC Club Foundation, were there to renew their touch and establish their tactics for play on an outdoor field following the indoor season. 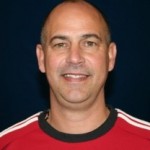 The team started its Monday sessions by focusing on the skills and abilities of the individual player. The rust, which had accumulated since the end of the indoor season, quickly fell away and it wasn’t long before the team hit their stride at training. The pace increased each day as the focus moved from individual skills, to team tactics and finally onto the fine art of finishing. The team was delighted to have this final headed by Canada’s National team coach, Stephen Hart (photo left).

Coach Hart was pleased with the quality he saw in the session and reminded the team that sports, especially team sports like soccer, help builds officer-like qualities. Coach Hart said, “A lot of [leaders in history], had sport in their background. It’s one of the few things left today that still has a discipline in it. It requires personal discipline, it requires you to be a team person and for those that excel in it, they become team leaders.” Coach Hart then wished the team well in their exhibition match that night versus Suburban FC – the second place finisher in the men’s first division of the Nova Scotia Soccer League.

The RMC team saw a modified line-up from the Nova Scotian club that featured players with experience on various provincial and national teams. The first twenty minutes saw the teams test each other while settling into their own style of play after being away from the outdoor game for so long. RMC pressed hard throughout the game but had their quality scoring chances turned aside by Suburban FC goalkeeper IV Jeremy Whalen (a pre-game trade when Suburban’s own goaltenders were unavailable). RMC also defended well as captains III Greg Theriau and II Dylan Kirk controlled strong play through the midfield which frustrated many of Suburban’s attacks.

Despite an excellent performance by III Jhordan Dorrington in goal for RMC, the patient and possessive gameplay of Suburban FC prevailed to a final result of RMC 0 – SFC 3. However, coach Victor Mendes was pleased with the team chemistry, the results of the training camp, and sees the team well positioned for the Fall 2011 season.

The team would like to thank the RMC Club Foundation for their on-going support of varsity programs at RMC. It is this funding that provides us with the opportunity to train with elite coaches, such as Stephen Hart, and provides the Margin of Excellence for sport at the college.

Thank you to all the cadets, ex-cadets and fans that came to support the team through the week. As well, a very special thank you to the team  athletic therapist Rhea Merritt for her hard work keeping us healthy for the duration of the camp.

See you in September for kick-off of the Fall 2011 season.

One Week Till Graduation; Drillfest in Full Swing

With one week until Convocation,  Graduation Parade and the Sunset Ceremony, RMC Cadets in rank and the honour guard have spent the week, and will spend the next several days practicing drill on the parade square. This period of May is referred to as Drillfest, and is the final push before the summer. The following pictures are from this past Friday’s parade preparations.

Although no photos are available, parade practises continued all weekend. Cadets were seen coming and going on and off the parade square through continuous and heavy downpours in a spirit of – the show must go on! 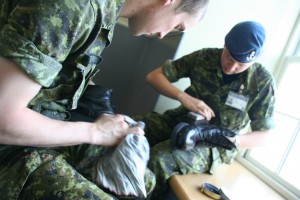 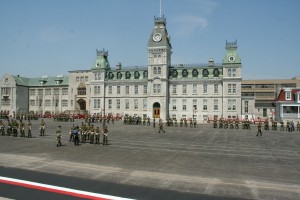