Church parade today was into Kingston and like yesterday we had a dandy march in with a good deal of singing. There’s no way of expressing how much easier and shorter the march is when there’s a good song to march to. Once again I went to Chalmers St United to hear Lt. Col Bannister and he gave a very thought provoking sermon on the present day Harrods who use their intellects to poor advantage for society. Afterwards had a grand dinner at McDougall’s. Mrs. McD drove Fritz and I back and we went out on the lake with the intention of going to Wolfe Island. But half way across there is a big crack where the ice has heaved up. Some men have made a sort of bridge with a few planks and charge cars .25 cents for a ride all the way across and as we weren’t that fussy on going over we turned around and came back. 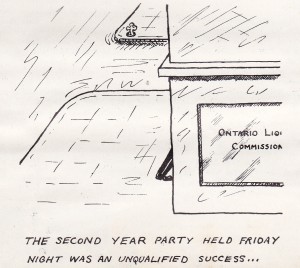 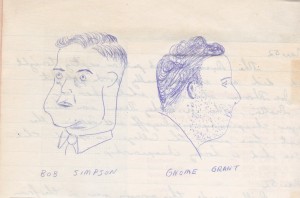 Inter-squadron badminton match today found me playing Bill Wray who took me 2 straight games. He’s one of the best players here at the college and certainly way out of my class. 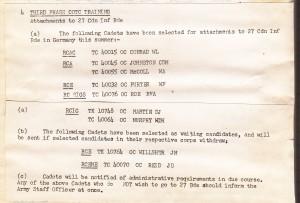 This morning there were some rumours floating around about the names of those chosen to train in Germany with the 27th Bde, and my name was one of them. Well, I had resigned myself to spending another summer in Shilo and so had no wild hopes on the matter, and furthermore was not inclined to even be mildly taken in by it all. Anyway when orders came out I was one of the first to get there and believe it or not, there it was: TC40055 O/C McColl, W.A.! Ever since then I haven’t been able to concentrate on anything else. The sailing dates are 5 and 19 May, 2 June and 30 June, and Murphy and I hope to go on the first one. Today the senior cadets who intend going P.F. (Permament Force) were told that they will all spend a year in Korea starting one month after graduation. When Danny Loomis heard about it he joined up on the spot; he had planned on going to U of T next year but was tickled pink at the idea of some action. Most of the rest of them are making wonderful plans – Peacock plans on opening a plush bordello in Seral with flashing yellow neon lights spelling out his motto “If you have no yen for us we have no yen for you”. The rabbit is just killing himself laughing at Cooper who was going to get married after graduation.

This morning we went into P.D. no.5 for fingerprinting and documentation – I guess they want to find out how many communist rallies we’ve attended, whether we’d be likely to slip across the iron curtain. Then this afternoon I was back – went in with Jim Graham and spent the afternoon bumming around Kingston. We spent perhaps an hour trying to find a St. Patrick’s Day card suitable for Sgt. Farley and Stinky McIntyre. Then tonight I was so determined to finish off an essay but a little man sneaked up behind me and clobbered me over the head.