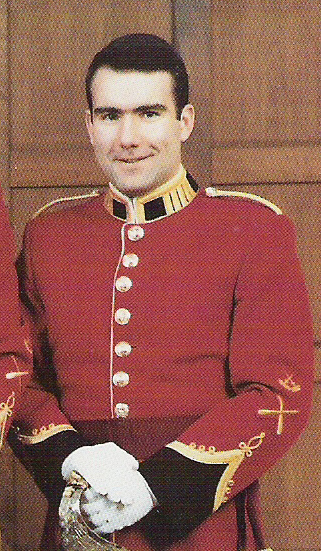 17362 Don Ludlow: I remember having a great time and learning a great deal as CWC.

We had a great team of class leaders/barmen in our year (Class of 1990) and everyone approached their different roles with a lot of focus, energy and fun.

E-veritas: What are your memories of 17350 Carole Jenkins (RMC 1990), who was the Deputy Cadet Wing Commander?

17362 Don Ludlow: CJ was an excellent DCWC – except when her sword scabbard scraped along the parade square when she marched! We spent a night together on Wolf Island as a result of a skylark gone wrong and my attempt at being helpful. We still keep in touch. Carole Jenkins – my DCWC – remains a good and trusted friend. [After graduating from law school at University of Windsor in 1998, Carole was admitted to the Law Society of Upper Canada in 2000. She practices with Smockum Zarnett Percival LLP Legal Experts in Toronto. Her areas of practice include: trial & appellate advocacy; medical, municipal & professional negligence; and hospital, municipal & occupier’s liability. http://www.szplaw.com/experts.html#cjenkins]

17362 Don Ludlow: Commodore Ed was a memorable general officer and leader. Italways seemed as though being Commandant of RMC was the greatest job he could have ever wished for. I remember meeting him – informally – for the first time during our 2nd year French language training. There had been a pub crawl the night before, so a number of us chose to sleep on the central sports field in order to save time in forming up for the class run the next morning. At about 6am some guy woke us up because he was running around the track – it was the new Commandant, Ed Murray. He didn’t do anything at the time, but made a joke about it a few days later when we formally met him for the first time as Commandant. His sense of humour was a good sign…

17362 Don Ludlow: There were a number of issues from the cadet point of view. The  amount of responsibility given to the cadet wing and its leaders was much less than what we wanted and out of step with the degree of responsibility given to student leaders at civilian universities. This was curious given the leadership development mandate of RMC. Walking out dress was always a sensitive subject and an increasingly dated idea, even in the 1990’s. What constituted ‘military’ training on our training weekends; although we all wanted to go shoot rifles, sail or fly depending on the branch, however we often seemed stuck in Currie Hall listening to equipment updates from NDHQ staffers. From the College’s point of view, I know that they were beginning to grapple with some of the ideas that we have seen implemented now: These include: how to increase the student intake and leverage the educational resources at RMC for all of the CF; whether 4th year cadets should be allowed to ‘live out’; and how to better connect training at RMC to the training cadets did during their summers.

17362 Don Ludlow: Good question, always wondered that myself. I didn’t ask for the job. I had expressed an interest in being a Cadet Squadron Leader or a rook Cadet Fleet Leader. I don’t think too many people were more surprised than me when I was announced for the CWC position. Not that I was useless or anything, but I always viewed CWC’s as fluently bilingual/academic stars/varsity athletes – that was not really me. At any rate, after the initial shock, I threw myself into the role and really learned a ton from the experience.

E-veritas: What were your responsibilities?

17362 Don Ludlow: Leading, managing and administering the Cadet Wing in the execution of their duties and in seeing that they made the most of what RMC had to offer. (More formally … led by their (cadet) wing commander, cadets learn to effectively operate and manage a wing while living in a student environment attending college).

17362 Don Ludlow: I think I took a fairly decentralized/empowering approach to leading the cadet wing, except where more decisive or direct action was required. The approach of our senior cadet team was very much, ‘let’s make the most of this and have some fun’. I encouraged everyone to go for it and let me rein things in if they started going in the wrong direction.

E-veritas: Anything you would do differently today?

17362 Don Ludlow: Nothing major comes to mind. I believe that I am a little better now at understanding individual strengths of people; and engaging and focusing the diverse strengths of teams in accomplishing common goals. On the whole, though, the leadership and management style I employed as CWC is not fundamentally different from my approach to leading and managing teams now.

17362 Don Ludlow: I put several lessons learned to use in later life: the importance of clear communication of goals, objectives and plans in relatively simple terms – especially when leading large teams. I learned that a leader is always looking after your people and working hard for them. If as a leader, you commit to your team and the welfare of its members, they will return it many times over. I learned the absolute imperative of leading by example. There’s no fooling the troops. Be frank, up front about problems and challenges and focus everyone’s time and energy on dealing with these. Otherwise, considerable time and effort gets spent behind the scenes, debating and worrying about problems and challenges. I learned that it is sometimes ‘lonely at the top’ and that your attitude as a senior leader very quickly permeates your team. If you are having a bad day, and you let it show, that attitude quickly trickles down. Likewise, if you are positive and maintain your sense of humour, everyone else tends to as well. Interestingly, I think these are pretty basic and timeless leadership lessons that we tend to have to relearn every once in a while.

17362 Don Ludlow: A number of friends and classmates, albeit on and off. My roommate 17325 Rob Duchemin was always a voice of reason and a good ‘reality check’ for me when I was CWC. We are looking forward to reconnecting at our class’ 20th anniversary this fall. (The interview took place prior to Reunion Weekend 2010) The Commandant and DCdts of the day were also great mentors in different ways. Although we periodically clashed on different matters, I really appreciated the professionalism of 9391 LCol Paul Mansbridge. Commodore Murray – as noted above – was a tremendously positive force at RMC.

E-veritas: What are you up to today?

17362 Don Ludlow: I am living and working in Toronto as a Vice-President of Commercial Banking at RBC Royal Bank. I am married to Fiona Boylan, who operates a bakery franchise we recently bought. [COBS Bread, 1539 Bayview Ave, Leaside, ON. http://www.cobsbread.com]

[Prior to joining RBC in 2001, Don served as an Infantry Officer in the Canadian Army. Don has an MBA from McGill University, an MSC from the London School of Economics & Political Science and a BA from the RMC in Kingston. Don is a member of the board of Findhelp Information Services (Findhelp), a charitable nonprofit organization.] don.ludlow@rbc.com