I just wanted to express my disappointment in the Veritas article regarding the CDS Commendations. Former Sgt. James Ryan, now a member of Otter Sqn, did quite an amazing job developing a training plan in Afghanistan for the ANP, however there is no write up explaining anything about it. Not only was there no write up, but after only stating that he and Maj. Suurd Ralph received the commendation, this sentence followed; “As we mentioned at the top of this article the badging presentation is the centre piece. This year was no exception”.

I feel like the appreciation that these members should have received for their job well done, so well done that the CDS recognized it, was not exemplified in Veritas and that is a shame. 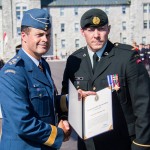 Click on photo by Curtis Maynard for better viewing

My family was bursting at the seams with pride this past weekend when we witnessed the spectacle, splendor and traditions while our first year son officially becoming part of RMC this weekend. I would love to get my hand on some ‘hard copies’ of the current issue for friends, family and as keepsakes. Are they available in press? How do I obtain/purchase some?

Your coverage was excellent and the articles laden with emotion and captured the deep meaning of the traditions and ceremonies. Thank you from the bottom of our hearts.

Hello Bill & Rolande – thank you so much for the great work you do with the newsletter – it is much appreciated by me and my whole family!

We have just returned from the weekend in Kingston – what a wonderful, beautiful experience – we will remember those 3 days forever.

My son, OCdt Beltramello 2 Squadron was IC for the obstacle competition. Unfortunately, we were in the stands when they made the final dash to the finish line and missed the photo op as the flight hoisted him onto their shoulders with the flag. I was wondering if you would be able to track down someone who may have that photo – I believe there may have been a photographer from the college there (?) I would be so very appreciative if I could get it.

Thanks so very much!

As always, a good read. What a fine weekend too. Good to see you.

Another great issue as always. Hope you and Rolande had a fun weekend meeting all of us old dogs from the past.

Have a good week.

I have said to you before, and I must say again: you and your e-VERITAS team are awesome!

While driving home on Sunday afternoon after the Old Brigade Lunch, I started getting messages from family members saying that they had already seen photos of me … and a great many other photos … in an RMC Reunion Weekend issue of e-VERITAS, including a photo of me at the Memorial Arch service which had concluded only a few hours earlier.

Don’t know how you manage to do this, but I’m sure “teamwork” plays a very large part in your project management activities.

Great to have finally met up with you Bill. True to your word, and hot off the press, I found your e-Veritas last night. Great work (as per SOP)

All the very best,

Thank you for the wonderful pictures you have posted. My husband badged his youngest that day and I was unable to get close to take a picture. You have several on you flickr account. Thank you