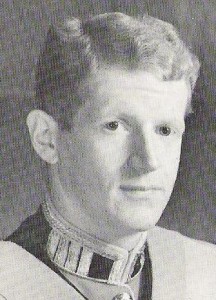 7715 Captain Edward Ronald (Ted) Bade (RR RMC 1969) was born December 5, 1946 in Barking, United Kingdom to George Edward and Winnifred (nee Gilbert) Bade. He was the brother of Roberta, Michael and Lori. The family moved to St. Catharines, Ontario. He enlisted on September 4, 1964 in Victoria, British Columbia, Canada. He studied at the Royal Roads Military College and was a member of no 5 squadron at the Royal Military College of Canada. He was the husband of Mary Catherine (nee McNamee) Bade and father of Nikki Anne Bade of Dartmouth, Nova Scotia. He served in the 880 Anti-Submarine Squadron, RCN. He was lost in air rescue on Sep 20, 1973 in Telkwa Pass, British Columbia at 26 years of age. His parents presented a memorial plaque to the Protestant Chapel at RMC on September 29 1974. He is commemorated on Page 157 of the ‘In the Service of Canada’ Book of Remembrance.