Weighing in on Navy

By 24340 Marsalie Mackenzie  (Marsalie graduated as part of the class of 2009 with a Honours English degree. She is a MARS Officer and is presently at RMC doing post-grad work. This is her third and what we hope will be a number of e-Veritas articles sharing her USNA exchange experiences.)

Bancroft Hall is the largest dormitory in the free world, housing over 4000 midshipmen, as well as their dining, laundry, medical, dental, entertainment and shopping facilities. I guess that’s why I found it no surprise when, upon receiving my room assignment, I accidently found myself wandering aimlessly in the seventh wing pool instead of meeting my host and baggage at room 4257. As it turns out, my mistake was an easy one to make-you see, within Bancroft Hall there are 2 pools, 2 gymnasiums, 20 squash courts and countless weight-rooms. As if that isn’t enough, the Naval Academy also has three separate field houses (one specifically for the football team, one for all varsity athletes and one for general midshipman use)-all of this in addition to the Annapolis sports centre, a massive complex located just across the Bay that houses numerous indoor tennis courts, as well as an ice rink. After landing myself in yet another weight room for the third time in one week, I honestly began to believe that it would require some serious effort to be out of shape at the Academy!

What started off as a joke gradually gained credibility as the midshipmen began to trickle back after their summer training. Generally speaking, the average midshipman was leaner and meaner than their RMC counterpart-so much so that it led me to ask my roommates if it was in their constitution to attain (and maintain) rock-hard abs and chiselled pecs. At first they laughed and informed me that their chubbier peers, like bats or raccoons, only came out at night and at meals. As it turns out though, my original assertion was not so far-fetched; as my roommates explained, part of the yearly in clearance procedure at the Naval Academy requires them to undergo height and weight testing, the results of which determines their eligibility for service. I had (wrongly) assumed that I would not be required to undergo height and weight testing; after all, weight, though an indicator, does not ultimately decide fitness. However, in early October, I was summoned by my lieutenant, who informed me that I would report to the fifth wing gym to be weighed in with the UNSATS (those who had failed to meet their requirements in September). Some veterans of the process took it upon themselves to explain to me the protocol. First, each midshipman is led to a scale where their weight is recorded. Simultaneously, their height is measured by a second individual, while a third does a quick calculation. If they meet requirements, the midshipman is free to leave. If they do not, they are led to a pen where they await further measurement of their neck, waist, arms and calves (this is to ensure that “athletic builds,” specifically wrestlers, are not misidentified as overweight). Those who are UNSAT after this process are then placed on a strict diet, with portions rationed to them at every meal, and forced to attend supplementary morning PT (regardless of whether or not they have passed their physical fitness testing). Ironically, those midshipmen placed on special diets are the only ones allowed to have a fridge in their rooms for personal use.

What is the reasoning behind this process? The standard answer I received during the course of the semester was to ensure that all members of the US Navy wear the uniform proudly, while promoting the importance of a healthy lifestyle. From what I could deduce, the US Navy considers this impossible for anyone wearing above a women’s size 10 or a men’s size 36 pants. Apparently, a lower BMI is a testament to an individual’s leadership potential; as it turns out, looking like ‘an officer’ is just as important as being one. While I am certainly not suggesting that physical fitness is in any way irrelevant, I am suggesting that there are already measurements and tests in place to ensure a member’s occupational effectiveness: the PT test. While it is acceptable to ask an individual to adhere to a physical fitness standard, it is wrong to ask them to adhere to an aesthetic one.

But what do I know? We only have one field house in Kingston . 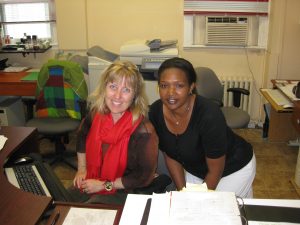 Change of Guard at Panet House

It is with sadness that the RMC Club is saying goodbye to one of our faithful workers. Kathleen Bachelder is leaving this month for Yellowknife, NWT as her husband is posted there. They, along with their two children, are looking forward to the adventures to be found in Canada’s North Country. She has been with us for three years as an administrative assistant and will remember most fondly the people with whom she has worked. She loves her job, but family is always first for her. You will be missed and we wish you well in your next endeavour.

On a positive note, we look forward to welcoming Kathleen’s replacement, Germaine Habiyakare. Germaine came to Canada from Burundi in 2000, and has recently moved to Kingston to be with her husband and children. She loves the city and is looking forward to getting a better sense of the RMC Club, and the RMC culture as a whole. She sees this position as a great opportunity to build relationships with those whom she will work, as well as those parents, members, and friends who pass through Panet House on a daily basis. Welcome Aboard!