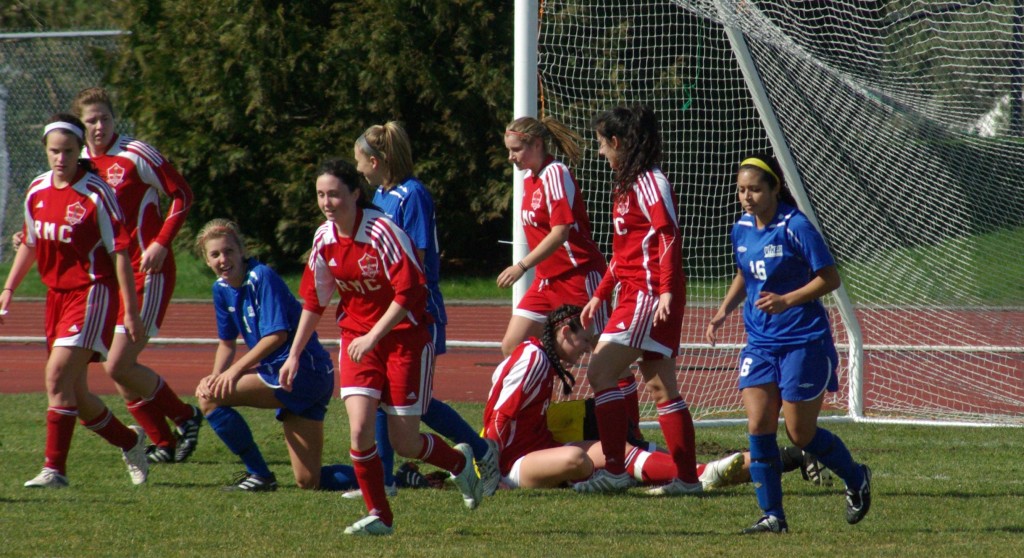 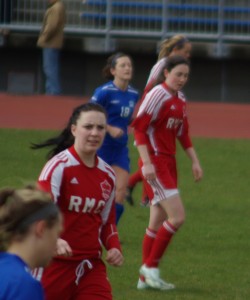 On Thursday, the team travelled to Nanaimo, BC to face the VIU Mariners at Merle Logan Field for the first meeting between RMC and VIU. Kick-off was only 24 hours after RMC had landed on Vancouver Island and the Paladins started off defending in numbers to establish their counter-attacking game. After keeping VIU to limited opportunities, it was the Paladins that nearly took the lead in the 26th minute. Lisa Udegbunam was played into space by Laura Gray after RMC forced a Mariners turnover. Udegbunam got a terrific shot on goal and a follow-up shot on the rebound that forced the Mariners’ keeper to make two great saves denying the Paladins a lead. RMC showed a dramatic improvement in team defending since the fall, anchored by defenders Stephanie Bengle, Adelaide Milos, Adelaide Fearnley, Samantha Beckett and Chelsey Labrecque. Olivia Clarke stood strong in goal in the opening half and along with her defenders kept the game a scoreless draw into half-time.

The second half saw the Paladins establish more attacking play as the team grew more and more confident in their passing and movement. VIU took the lead on a goal off a corner-kick in the 56th minute of play as the ball dropped into RMC’s goal area but the Paladins could not clear the danger. Although down a goal, RMC kept to their game plan and were able to create numerous chances in the last 20 minutes. First it was Michelle Hamilton whose shot skewered wide of goal after she received a long throw-in from Fearnley. Samantha Beckett took an excellent shot from the top of the penalty area that had the Mariners keeper beat but hit the outside of the post. In the final minute of play, the Mariners’ goalkeeper stole the game as she denied Udegbunam once more after she was in on goal alone. Udegbunam’s shot was a firm and precise one but only an acrobatic save from the VIU shotstopper kept RMC off the scoreboard. A 1-0 loss was a tough result to accept considering the chances the Paladins created.

On Saturday, RMC took to Centennial Stadium on the campus of the University of Victoria Vikes. This impressive field and facility provided a great setting for the second ever meeting between these two soccer programs. The Vikes found an opening goal in the 6th minute of play as fullback Nathalie Scharf launched a screamer of a shot that beat RMC’s goalkeeper Kelly Milliken. That early lead gave the Vikes a big boost in confidence but the Paladins played their way back into the game and got their first chance off a corner in the 25th minute. Bengle swung her corner-kick and was met by Beckett but her attempt was saved by the Vikes goalkeeper. Unfortunately for RMC, the Vikes found two more goals before the halftime break to take a 3-0 lead into the second half.

As in Thursday’s game, RMC started the second half establishing much greater possession and more attacking movement. The Paladins continued their strong defensive play to create openings on the counter-attack. Second-year Olivia Clarke was in goal for the second half and made three key saves to keep the Vikes from increasing their lead. However RMC could not find any goals for the last half and one last effort by the Vikes gave the home team a 4-0 win.

Despite the two losses, the women’s soccer team performances were an improvement on their previous showings on the west coast (2007) and much better than the majority of their showings last fall. The entire program would like to thank the Foundation for their support in the program’s trip to Vancouver Island.