In the continuation of the Seven Day Diary project, 24245 Captain Justin Lystiuk, Squadron Commander of 6 Squadron, was the next designated victim.

As is becoming apparent, Captain Lystiuk’s path to RMCC command is far from predictable. Beginning in the Reserves, Lystiuk started his military career as a vehicle technician in Halifax before a chance encounter with the Red and White Club. Eight months after enlisting as an NCM, Lystiuk was accepted into the Royal Military College as an Aerospace Engineering Officer in September of 2005. At the time, with CMR and Royal Roads closed as fully functioning universities, he enrolled in a preparatory year before beginning the traditional four-year degree in Kingston. He was selected for 9 Squadron, as a member of the very first Aeronautical Engineering class (composed, coincidentally, of 18 cadetss). It was a scholarly career of many firsts indeed. 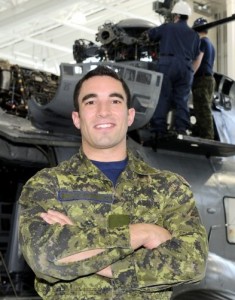 Following graduation, Lystiuk was posted to 12 Air Maintenance in Shearwater for four years. Upon completion of his posting, he faced a choice – Ottawa or RMCC. Remembering his time fondly with the College, he chose to return, though he desired a mentorship position specifically. His place as 6 Squadron Commander brought back early memories, such as the infamous “Sauve Experiment”, when all first years (including his class) were housed in Fort Sauve in a misguided effort to foster camaraderie amongst the freshmen. Seeing himself as closer to the cadets’ experiences than many of his colleagues, and a relatively small gap between his graduation and that of the fourth years, Captain Lystiuk wanted to foster a strong link with the cadets under his command. He approached the position with a focus on mentorship of the fourth years, anticipating their first postings, and restoring the spirit of RMCC as a military-oriented college.

Like many of the SCs here at the college, Captain Lystiuk emphasized the importance of being available after hours. “While we work, the cadets are in school,” he explained. “But after the typical 8-4, the real work for the barmen begins. We have to understand (as Squadron Commanders) that the lion’s share of work is done after classes end, and we need to be available for them.” He takes his position as a liaison between the squadron barslate and the Military Wing quite seriously, and, living close by, makes himself openly accessible to the still-learning third- and fourth-year Cadets.

When asked what else Captain Lystiuk would like to do with his position as a Squadron Commander, he noted the importance of taking pride in the institution. “RMCC tends to have a cycle of memory,” he remarked, reflecting on his own days at the College. “All it takes is four years for something to have existed ‘forever’.” He explained that it was important to note that the struggles of the cadets, while fresh to them, are not new occurrences and so they are not alone in experiencing them. Emphasizing the military part of RMC is an aspect he wishes to see all the cadets take to heart, taking pride in what distinguishes RMCC from typical civilian universities, and sharing that pride amongst one another when tackling each year.

As always, it was a refreshing experience to interview a Squadron Commander and see their impression of their position within the College. It’s my great hope that cadets will take advantage of these open doors and get to know the men and women in charge of them, even if is only to say hello. Be it a RMCC graduate or Direct Entry Officer, they continue to have a wealth of knowledge they’re eager to share. 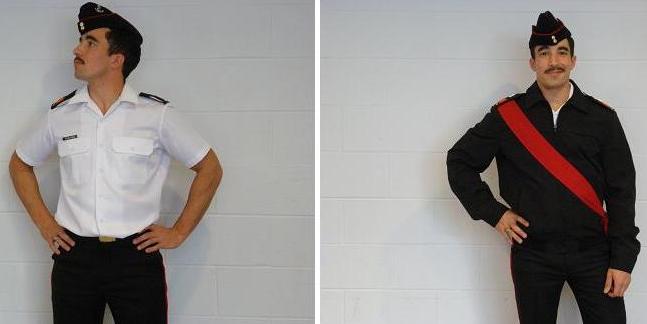 Arrived the night prior from Nova Scotia. I had flown out on Wednesday of last week. My parents picked me up in Moncton and we went to our Cottage in Pugwash NS. I borrowed their vehicle to visit Halifax for 2 days to check up on my house that I still have in NS that still has not sold. This is becoming a more and more common issue among members of the CF being posted. Many of us are having difficulty selling our houses. I checked on the property, met with the realtor and made sure all is good for the winter months.

I drove back starting at 0500 on Saturday and drove right through to Kingston arriving that night.

1040 – Go outside and put winter cover on the air conditioner.

2030 – Arrive home and realize that I can’t find my cell phone. Then I realize that I left it on the bed of my truck while I was putting air in my tire while in my driveway before dinner. So I walk down the road and I actually find it….in pieces because it got run over. So I have no cell phone now.

0930 – OCdt (2nd Year) arrives at my office to discuss the possibility of changing Academic Programs as they are currently struggling academically. Discussed the career, academic and college implications to his decision. Encouraged him to engage the registrar into this possibility.

1045 – 1200– Met with CSL, OCdt Kirkham to discuss the current state of 4 sqn. I have been away for 2 and half weeks. I left on the 17th Oct to attend the People’s Liberation Army Air Force (PLAAF) for the 2nd International Cadets Week event in Changchun, China. I went with 3 other RMCC Cadets, OCdt Trudel, OCdt Otis and OCdt Cruz. There we spent a week immersed in their academy. We were one among 12 other countries invited, which include the US, Spain, Portugal, Pakistan, Indonesia, Malaysia, South Korea, Italy, Brazil, Turkey and UK.

We discussed my trip as well as he gave me a complete update on the state of affairs in our squadron.

2000 – Prep all the garbage and recycling for the next day at home.

1000 – Met with a CFL (Cadet Flight Leader) to discuss issues with one of their members. The member has been observed to have issues regarding alcohol and it’s now being brought to my attention.

2000 – Play intramural hockey with the B Div Ocdts

0700 – B Division form-up outside Fort Sauve. A/Div Comd addressed the Div in regards to the current lack of interest in the 2014 RMCC Winter Ball.

1230 – Pick up new phone at the Post Office. New cell phone again! This is a big deal because the RMCC Webmail can be accessed through our Smartphones now. Almost every single cadet has their email to their phones now. This is a big difference from when I was here.

1545 – Attended the CWC Coord with the Winter Ball OPI OCdt Germain to discuss the winter ball.

1930 – Depart for Intersection Hockey. My brother Paul (who is currently on his QL3’s for Comms Resch Tech in Kingston) came out to play with us as well. It was good to play hockey again with my brother, which I haven’t done in well over 5 years.

B Div Comd Maj Hook back from leave

1045 – Return to my office and met with my CSL. Discussed the upcoming Winter Ball, IR’s for Cadets, PPT failures, mid-term academic marks (specifically cadets who are currently failing classes) and coming up with an action plan as to how we can assist these cadets succeed in their academics

1345 – Met with A/Mess Mgr Ted Huber to discuss the Winter Ball and current ticket sales. Ticket sales have been significantly less than they have in previous years

1530 -1600 – Meet with OCdt regarding mulitiple deficiencies

0835 – Arrive at work. Today is the Commandant’s Room Inspection

1020 – 1200 – Commandants Room and Dress Inspection. The inspection went well. It was a good opportunity for me to finally get a chance to see the whole squadron in their sqn lines and have a chat with a few of them.

1800 – Make dinner. Alicia is working nights so night alone with the dogs!

7 Days in the Life of a Squadron Commander Pt. 1