Class of ’53 anniversary. Which one?

St. Patrick’s Day got off to a grand start with Jimmy Graham playing “My Lodging’s on the Cold Ground” on his bagpipes for reveille. This old Scottish tune has been pirated by some malicious Irish lyricists and called “Believe me of all those Endearing Young Charms.” It’s been almost a month since the last entry – we won the CMR tournament and lost the hockey game (5-4) and pistol match with West Point. A bus-load of cadets went down and had a whale of a time. Barry brought back one of their “tar-buckets”. Kory has been a valuable addition to the lower deck and we have a lot of rap rummy now that he’s here. Also Indian & Kory have started getting me up at 0400 or 0500.

Last Sunday Bill Hunter & I were up to Maj. Gen Potts’s house for dinner. He has a lovely home up past Barryfield Village overlooking the Cataraqui River. The old bulldog is quite a character. A couple of Craftsmen out for a walk came along and he invited them in for a beer – he has a lovely little bar – very well stocked.

Our flags are at half mast now for Queen Mary who died in her sleep two nights ago. We don’t know as yet whether it will affect the April Ball. 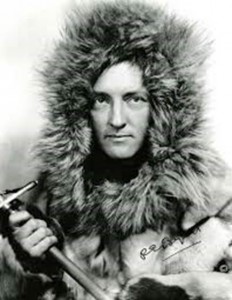 “Few men during their lifetime come anywhere near exhausting the resources dwelling within them. There are deep wells of strength that are never used.”

“A static hero is a public liability. Progress grows out of motion.”

After graduating from the U.S. Naval Academy in 1912, Byrd was commissioned an ensign in the U.S. Navy. He learned flying at the U.S. Naval Air Station, Pensacola, Fla., and served in the navy with distinction until the end of World War I. After the war he developed navigational methods and equipment for NC flying boats, one of which made the navy’s first transatlantic airplane flight in 1919. He also assisted with dirigibles built for transatlantic crossings. His polar career began in 1924 when he had command of a small naval aviation detachment with Commander D.B. MacMillan’s Arctic expedition to western Greenland, based at Etah.

The experience of flying over sea ice and glaciers in western Greenland had fired Byrd with the ambition to fly over the North Pole. On May 9, 1926, Byrd, acting as navigator, and Floyd Bennett as pilot made what they claimed to be the first airplane journey over the North Pole, flying from King’s Bay, Spitsbergen, Norway, to the Pole and back. The flight lasted 151/2 hours, with no mishaps beyond an oil leak from the starboard engine of their Fokker trimotor airplane. For this feat they were both awarded the U.S. Congressional Medal of Honor and were acclaimed as national heroes. Some doubt always lingered over whether their plane had actually reached the North Pole, and one of Byrd’s early associates, Bernt Balchen, even claimed after Byrd’s death that the flight to the North Pole had been a hoax. The discovery in 1996 of the diary that Byrd had kept on his famous flight shed new light on this question. Byrd’s diary entries suggest that the airplane was still about 150 miles (240 km) short of the North Pole when Byrd decided to turn back because of his concern over the oil leak. (If this is true, then credit for the first flight over the North Pole actually belongs to Roald Amundsen of Norway, Lincoln Ellsworth of the United States, and Umberto Nobile of Italy, who made a well-documented flight over the Pole in a dirigible three days after Byrd’s flight.)

Byrd next aided the American aviator Charles A. Lindbergh with navigational training and the use of the specially extended runway for Lindbergh’s transatlantic solo flight in May 1927. Byrd then decided to make an attempt to fly the Atlantic from west to east; and in June 1927, with three companions, he made the flight in 42 hours, crash-landing in bad weather at Ver-sur-Mer on the coast of Brittany, France. For this successful flight he was made a Commandant of the French Legion of Honour.

In 1928 he announced his decision to explore the unknown regions of the Antarctic from the air. With large financial backing from such wealthy Americans as Edsel Ford and John D. Rockefeller, Jr., his fame was such that he could inspire the American public to contribute liberally to the estimated cost of the venture, which was about $400,000.

Byrd’s first Antarctic expedition (1928–30), the largest and best-equipped that had ever set out for that continent, sailed south in October 1928. A substantial and well-supplied base, called Little America, was built on the face of the Ross Ice Shelf, a wide plain of shelf ice fronting the Ross Sea near an indentation in the ice cliff named the Bay of Whales. Flights were made from this base over the Antarctic continent. A range of high mountains, named the Rockefeller Mountains, was discovered; and a large tract of hitherto unknown territory beyond them was named Marie Byrd Land, after Byrd’s wife. On Nov. 29, 1929, Byrd, as navigator, and three companions made the first flight over the South Pole, flying from Little America to the Pole and back in 19 hours with no mishap. Byrd was afterward promoted to rear admiral for this achievement.

In 1933–35 a second Byrd expedition visited Little America with the aim of mapping and claiming land around the Pole; he extended the exploration of Marie Byrd Land and continued his scientific observations. During the winter of 1934 (from March to August) Byrd spent five months alone in a hut at a weather station named Bolling Advance Base, buried beneath the ice shelf face 123 miles (196 km) south of Little America, enduring temperatures between −58° and −76° F (−50° and −60° C) and sometimes much lower. He was finally rescued in a desperately sick condition, suffering from frostbite and carbon monoxide poisoning. This was perhaps his most controversial exploit.

At the request of President Franklin D. Roosevelt, Byrd took command of the U.S. Antarctic service and led a third expedition to Antarctica in 1939–41, this one financed and sponsored by the U.S. government. Bases were located at Little America and Stonington Island, off the Antarctic Peninsula. Byrd’s discovery of Thurston Island greatly decreased the length of unexplored coast of the continent.

During World War II Byrd served on the staff of the chief of naval operations and, among other duties, evaluated Pacific islands as operational sites. After World War II Byrd was placed in charge of the U.S. Navy’s Operation High Jump. This Antarctic expedition, his fourth, was the largest and most ambitious exploration of that continent yet attempted and involved 4,700 men, 13 ships (including an aircraft carrier), and 25 airplanes. Operation High Jump’s ship- and land-based aircraft mapped and photographed some 537,000 square miles (1,390,000 square km) of the Antarctic coastline and interior, much of it never seen before. Byrd flew into Little America from the deck of the aircraft carrier Philippine Sea north of the ice pack, about 700 miles (1,100 km) from the camp. He made a second flight over the South Pole and took part in several other flights.

In 1955 Byrd was made officer in charge of the United States’ Antarctic programs and became the senior authority for government Antarctic matters. In this capacity he helped supervise Operation Deep Freeze, a major scientific and exploratory expedition sent to the Antarctic under navy auspices as part of the program of the International Geophysical Year (1957–58). Byrd accompanied the expedition aboard the icebreaker Glacier and took his last exploratory flight over the South Pole on Jan. 8, 1956.

Byrd was one of the world’s foremost aviators and displayed extraordinary gifts in organizing successful expeditions to Antarctica. His major achievement was to apply the airplane, radio, camera, and other modern technical resources to these polar explorations. His five Antarctic expeditions made progressively greater use of ski-planes, ship-based seaplanes, and even helicopters (in 1946–47) to transport men and equipment and to carry out systematic reconnaissance and mapping programs using aerial photography. The expeditions yielded a wealth of new information about the continent, and operations High Jump and Deep Freeze in particular were milestones in the history of sustained, permanent scientific polar research. The aerial sextant and wind-drift instruments that Byrd invented in the years following World War I considerably advanced the science of aerial navigation and were of great use in his own explorations.

Byrd wrote several books about his adventures. His first book, Skyward (1928), contains descriptions of his 1928–30 expedition to Antarctica, his flight to the North Pole, and his flight across the Atlantic. Little America (1930) is an official account of his aerial exploration in the Antarctic and his flight to the South Pole, and Alone (1938) describes his experiences at Bolling Advance Base. Byrd was extremely competent in public relations, and his expeditions were surrounded by a glare of publicity that made him a national hero and an internationally famous figure.