Yesterday morning after drill, the Rev and I went skating out by Cedar Island. The ice is pretty fair; there were some people out fishing and catching perch through the ice. The iceboats were out today too and two of them with a jib were having a great time. Freddy Gilbert came back from Wolfe Island in five minutes using the College boat with only a triangular sail. In the afternoon it rained and so spoiled the skating party the senior class had planned.

Today it is still mild. Fritz was off to Toronto with the swimming team so we turned on the heat in his room, which he likes to have cold as a refrigerator. He was furious on coming back to find the heat unbearable. The flu has cut down our flight a great deal—only four men on parade today for church. Of course a great number of them were on leave as well. The swimmers did fairly well; it was Toronto, McGill, RMC, and McMaster in that order—we didn’t have a full team or compete in all events either.

Today we wrote two midterm exams. Used the new lecture room 250, which is windowless, and air conditioned—very nice. Jimmy Graham was wandering around here tonight with a policeman—bat and a billy, having a great time. We went over and did some pistol shooting after tattoo. Willy Hough has two exams tomorrow so he was all for going to the show, but Don McKinnon wouldn’t sign his pass so he was all for going over Don’s head and getting Dave Winter to sign it. What a crazy guy! We are all kind of crazy around here anyway.

This has been a long day. We had P.T. and after classes gym team. Then right after supper our flight played H flight at basketball and we won 43-18. After tattoo again we did some shooting and I lost a coke to Dave Winter. We bet it on twelve rounds rapid fire. He got eight-three and I got a seventy-nine. That cursed Winter is like a fiend when there’s a stake, especially my stake. It’s not the first time he’s taken cokes off me.

This afternoon we competed against the staff who raised a pistol team to meet us. We won easily. Don McKinnon pulled off the sensational score of 102/120. Then at 1600 we ran through the whole gym display—chairs, mat work, bars, high horse. I was pretty pooped out after supper and dozed off so as a result I’m up late again. 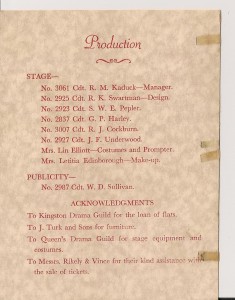 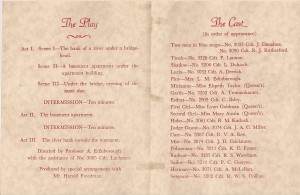 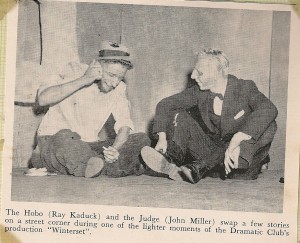