This is the third installment of our seven part series on The History of the Royal Military College of Canada, by #47 LCol Ernest F. Wurtele, VD. LCol Wurtele graduated RMC in 1882, served as honourary secretary-treasurer of the RMC Club from 1892 to 1913, was the associate editor of the RMC Review, for ex-cadet news, from 1926 to 1936, and was the first honourary member of the RMC Club. 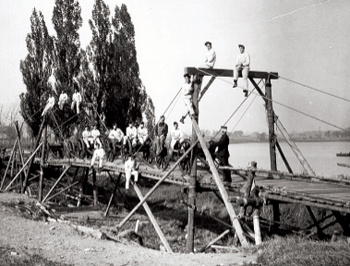 For admission to the college the candidate must be a British subject residing in Canada. An exception is made in the case of the son of a graduate, who is eligible for admission as long as his father is employed on Government service anywhere within the Empire. Admission is granted by competitive examination to candidates between the ages of sixteen and twenty. There are from twenty-four to thirty vacancies each year, the intention being to maintain the attendance at the college at from ninety to one hundred cadets. From the time that a cadet is admitted he is an enlisted soldier and is subject to the Army Act, the King’s Regulations, the Militia Act, and such other rules and regulations as apply to His Majesty’s troops. For the time being the State takes the place of his parents, who have in law no authority over him.

The cadets are arranged in four classes, at the head of each of which is a sergeant-major selected from among themselves. At the head of these four sergeant-majors is the battalion sergeant-major; also a senior cadet, who occupies the position of intermediary between the cadets and the Staff. The office of Captain of Cadets, established in 1876, was abolished in 1880, and the duties appertaining to this office have since been performed by the officer designated as the Staff Adjutant, and by the captains of the companies of cadets. The fees for the entire course amount to about $800; this amount covers the cost of uniform and educational material, and, for an institution possessing such educational advantages, can only be regarded as nominal. The average annual cost of the college to the country is a trifle less than $150,000 – a small sum, when the importance and high quality of the work done is considered.

The curriculum is divided into ”Obligatory” and ”Voluntary” courses. Every graduate must qualify in Infantry, Artillery, and Engineering drills, Equitation, Gymnastics, Swordsmanship and Swimming, Mathematics and Mechanics, Practical Geometry, Military Engineering, Engineering Drawing, Hydraulic Engineering, Design and Execution of Structures, Military Administration, Law, Strategy and Tactics, Surveying and Military Topography, Reconnaissance, French, Physics, Geology, etc. The courses are so arranged that the graduate is fitted for work, not only as a military expert but as an electrical engineer, a civil engineer, or a land surveyor. It is not claiming too much to say that few institutions in the Dominion give as high a technical training and none a superior.

It is sometimes asserted that the curriculum of the college is superior to that of Woolwich or Sandhurst. The military education given is undoubtedly of a higher standard and more thorough than at either of these institutions, but in the Royal Military College of Canada the education is intended to be more or less final in its nature, whereas at “Woolwich and Sandhurst the instruction imparted is but preliminary to future continuous instruction and training in regiments, the Staff College, the School of Musketry, the Artillery College, etc.

The word ” Diploma” is more fitting as regards the course of study, and serves to distinguish the graduates from the holders of *’ Drill ” certificates issued to all ranks by the Royal Schools of Artillery and Infantry. The graduates have a recognized scholastic standing, and are entitled to go up for examination as Dominion Land Surveyors, or Provincial Land Surveyors in Ontario and Quebec, after one year’s service in the field instead of three as in other cases. In Ontario and the North-West Provinces the Law Societies recognize graduates on the same footing as graduates from the universities. The College of Physicians and Surgeons for Ontario similarly exempts them from matriculation examination for the study of medicine. A graduate can become a member of the Dominion Association of Chartered Accountants if he has served under articles for three years, in place of five.