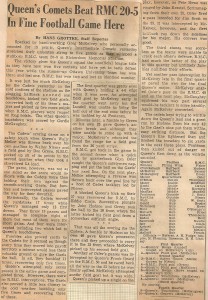 Finally got an eye examination after 6 days without glasses. I stopped a soccer ball in the face last week and smashed them all to hell. Well the army tells me it will be another week or so before I get the glasses. The soccer team lost to Varsity 3-2 and the Junior rugby team walked all over poor old Ashbury in Ottawa. At soccer tonight we tied #3 sqn after a terribly rough game 2-2. I can hardly walk or move from aches all over, from rugby yesterday & soccer tonight.

This afternoon I was supposed to go into KMH for the weekend but after waiting up there 2 ½ hrs they told me to come back next week. So I missed seeing our game with Queen’s. We lost 20-5. The fellows say they played a very poor game and felt pretty low about it all. We also lost to Varsity at soccer 2-0. I saw the last half. Soccer is an exciting game to watch if the play is good and it was good today – cold as hell though. Balls McMillan was injured & sent to K.M.H.

First snowfall – about 1 ½” of lovely white snow on the square when we woke up this morning.

Some bad news today – Glen Tivy was electrocuted on some P.W.O.R. sigs scheme – We were all very sorry to hear about it.

A formal dance tonight – was a very successful one. Our year had a big sing song up in our rec room. The motif was Halloween and the fellows rigged up a stiff in a coffin which was very scary looking in purple and green lights.

Big event of the day – Col. King launched his “submarine”. He was sitting up in the cockpit looking like Nelson when the thing was sliding down into the water. Lt. Cmdr Wilson in his frog-man suit was in the water on & off for over an hour. Well it seems that one of the two engines isn’t installed yet and so it isn’t balanced properly. So the bloody “sub” rolled just like a log in the water and Col. King got dunked a couple of times. A big gang of cadets stood around and just had fits from laughing too hard. There were more snafus like the sub getting caught in the track as they finally hauled her out of the water again. Fritz and the harriers team got back from Hamilton – they placed 3rd out of 7 teams entered in the Canadian Senior Harriers – pretty good competition for the boys – it was a six mile race.

Moon was up to see Balls yesterday. He was describing how all the boys were getting along and had me laughing for about half an hour. Apparently Dillon has a tremendous big cast from the hips down to his toes. And Balls is all but up and has to lie on his side. He told Moon “The doc said I’ll be in here a month, but he was only kidding. I’ll be back on Monday.” Old Moon says Balls can hardly move. His girl, Betty, was to come down for the dance last night but they didn’t do much dancing. Old Balls is just fit to be tied.