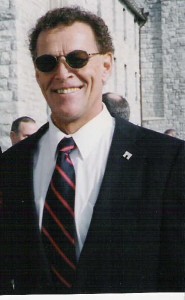 8035 Don Gates (RMC ’69), Ph.D., is happy to announce the recent publication by Denver’s Water Research Foundation and Italy’s AMGA Fondazione of a 4-year book project, State of the Science of Chlorine Dioxide in Drinking Water in February, 2009. Don works out of Sacramento, CA, as an independent consultant with more than 25 years of practical and applied experience with chlorine dioxide (ClO2) in the drinking water field. He is senior science editor and one of the main contributing authors to the project, the most comprehensive and authoritative resource published on this important subject in more than 30 years.

Prior to this project, Don was involved as lead chemist with key pesticide registration and onsite remediation of weaponized anthrax contamination using gas-phase ClO2 in Washington D.C. and Trenton, N.J., between 2001and 2003. He assisted hundreds of municipal water groups with ClO2 installation and analytical training from the mid-1980s through the mid-1990s, and helped resolve key regulatory data gaps surrounding ClO2 and chlorite toxicity as a member of USEPA’s Technical Workgroup in the 1992-1993 Negotiated Rulemaking (Reg Neg) and 1996-1997 FACA processes for updating the Safe Drinking Water Act -SDWA. Throughout the 1990s, he also contributed useful first hand scientific comments about ClO2 to the public docket in response to USEPA’s proposed M/DBP rules for SDWA, as well as provided comments that helped refine Chapter 4 in their Alternative Disinfectants and Oxidants Guidance Manual (1999). He is the author of AWWA’s The Handbook of Chlorine Dioxide (1998) and the senior contributing author to ANSI/AWWA B303 (05) Standard for Sodium Chlorite. Other than his rookie year with the Class of 1969 at RMC, Dr. Gates has a B.Sc. (Honours) in biochemistry, an M.Sc. in microbiology, and a Ph.D. in experimental surgery from the University of Alberta, along with Post Doctoral Fellowships at Dartmouth Medical School, Hanover, N.H. and Manchester’s Withington Hospital in the U.K. Currently he works on big slapshots and correcting an even bigger slice from most tee boxes he encounters. dongates15@comcast.net 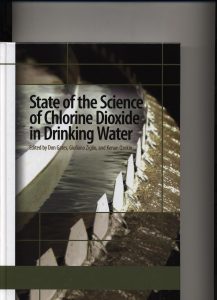 ABOUT THE BOOK. Unlike previous research projects and user manuals on ClO2, this book takes an integrated, global approach in each of its nine chapters. Twenty-four experts from Europe and North America have bridged some of the enormous gaps that exist among the various approaches to chlorine dioxide application and regulation in drinking water treatment with this effort. Differences in generation technologies, monitoring requirements, and novel approaches to improved surveillance in public water systems are discussed, together with well-documented, insightful case studies from municipalities on both continents. Advancements in the understanding of chlorine dioxide chemistry and drinking water disinfection by-product control, as well as the advantages of continuous online monitoring in water distribution systems in Europe, are discussed. Potential health concerns of ClO2 and its major related disinfection by-products in drinking water are addressed in light of current toxicity findings, routes of exposure, possible mechanistic explanations, along with recent epidemiological perspectives. State of the Science of Chlorine Dioxide in Drinking Water is an indispensable, up-to-date information resource and teaching aid for industrial and engineering technologists; academic researchers; public health officials; water plant operations, maintenance, laboratory and management personnel; and government regulators worldwide. Available through WRF, Denver CO; 363 pp, 78 fig., 71 tables.