Above: The author as a speaker at a 2008 dedication ceremony at the new library at West Point to a mixed civilian/military audience of some 100 to include the Polish Consul and the Academic Dean (a brigadier general).

Over a continuous military and state level civil service career that spanned over five decades, on reflection, the ability to speak effectively to small and large groups appears to have been critical to ultimate effectiveness as a leader.  This would seem to draw a “that’s a blinding flash of the obvious” response, but I would not be so hasty in such a conclusion.  From observations made in that career and continuing observation, there are many leaders who in a range of ways were not and are not effective speakers.  As well even effective speakers have bad days and clearly miss the mark.

As a start point to these observations, my sense of the military leader’s range of speaking terrain is comprehensive.  Any military leader, earlier than later in their service and especially if their career becomes extended to several decades, will be forced to exercise speaking skill in the following areas, and this is not an exhaustive list.  Any lack of ability by a leader may compromise their effectiveness, sometimes severely.

As noted this is not an exhaustive listing.  The settings range from intimate and highly charged like entering a combat situation to more bland environments like classrooms or briefing rooms. The groups may be very small, two or three people, ranging upwards to thousands.  The groups, teams, and organizations may be highly technical or professional bodies or large general groups of the public. To be effective, the speaker must have credibility, present confidently, project well and most critically be able to sense and read the audience.   The same speaking style and mode will typically not play well for all speaking audiences.

From much experience of personally presenting and observing thousands of others do so and noting the effects and result, some general points appear to hold.

Of course, the audience, situation of presentation and purpose of the speaker’s comment all affect the format and style of the speaker.  In the case of the military speaker, as noted earlier, the range of speaking engagements is hugely varied and the requirement to speak begins very early in career.  In the case of officers who commission from academies the requirement begins to surface even earlier as cadets.  Those who fail to develop the necessary skills will be greatly compromised and in certain cases removed from service.  Speaking skill at this early tactical level is vital to personal progress as a leader.

On a more advanced level as careers progress and more sophisticated professional audiences of varying sizes must be addressed for different purposes, leader ability to effectively adapt and tailor speaking skill to effect becomes vital for that leader’s progression to more involved and sophisticated leader roles as a career develops.  Those unable to effectively communicate through the speaking medium typically are relegated to lesser roles unless they have developed or demonstrated some counterbalancing abilities and capabilities.  Even when the system may have been somewhat corrupted and an individual has been propelled to higher role…a weakness or deficiency in their speaking ability will compromise their effectiveness, never mind any negative perception that may exist as to how they advanced.

The above observations are made after personally experiencing the range of speaking requirement that had to be met at squad, platoon, detachment, company, and battalion command levels as well as battalion, brigade, division, corps and Department of the Army staff levels for over 18 years which included numerous presentations to senior executive leadership and foreign military establishments from 1985 to 1992, i.e., several times to local regional German capital projects planning conferences, the U.S. Army Europe Annual Training Conference, and three times to sessions of the British/U.S. and German/U.S. Army staff talks.  Presentations were also made to major defense industry consortia.

Additionally, instructor trainer presentations requirements spanned some seven years.  Presentations as a member of the Army were made to other civilian and public audiences outside industry one being a Memorial Day presentation made in the city of Northampton, Massachusetts (see below; click on the image for better viewing). 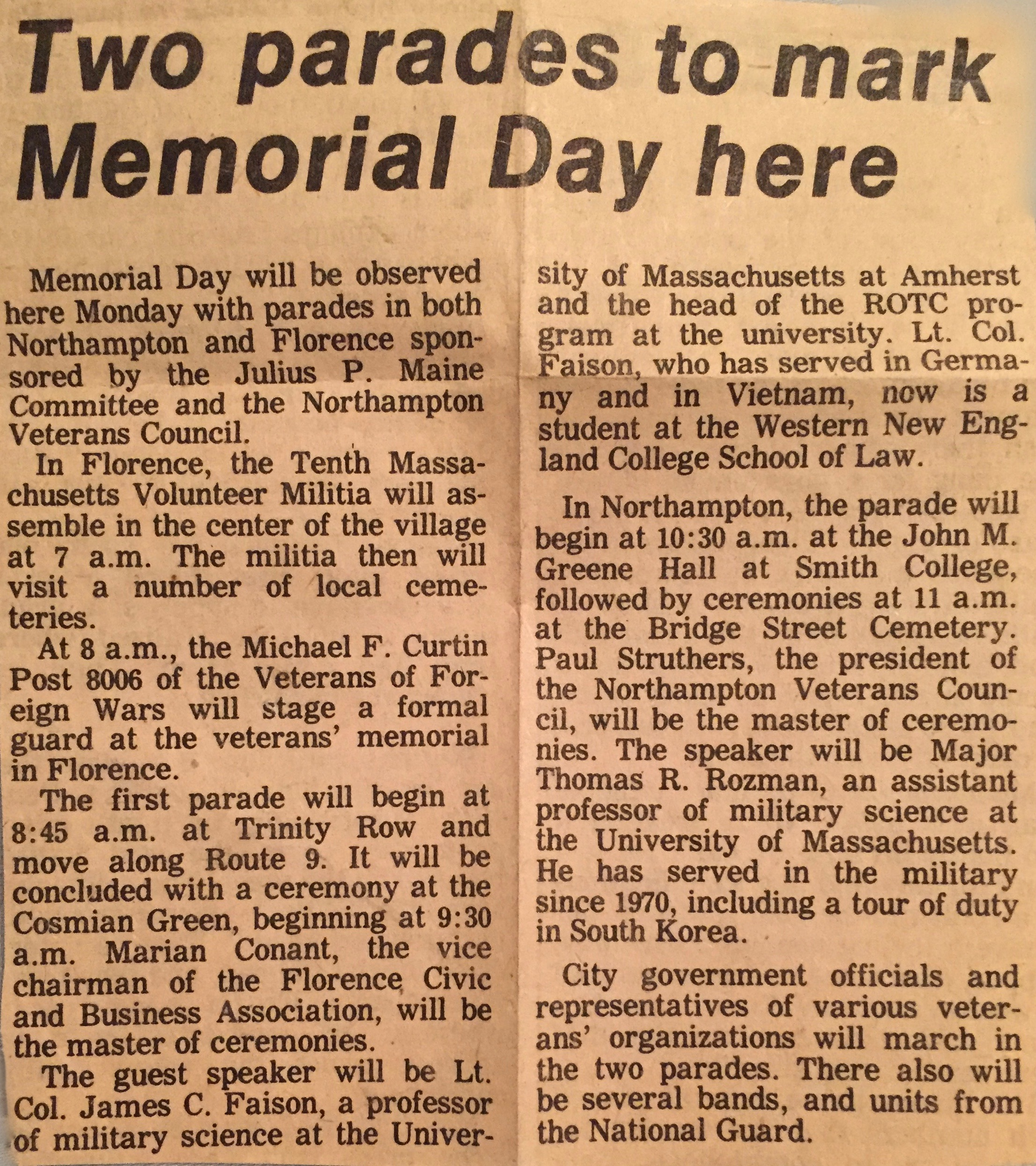 This experience was further augmented by over two decades of civilian presentation experience to civilian leadership, professional, government to include legislative, public and interest groups.  The presentations ranged from instructor/training, policy sharing, project updating and public debate forum.  Two of the more significant recent presentations made were one to the American Society of Safety Engineers Annual Conference in Dallas, Texas in 2015 and another to the Virginia Annual Occupational Safety and Health Conference in 2016.

In addition to the above observations supported by this experience I also noted that military presenters who had effectively transitioned to the civil sector were typically the strongest and most effective presenters.  They tended to have a better handle on their subject matter, spoke with convincing credibility and confidence and seemed most effective in reading an audience.  As well, their comment typically made the point and in some form followed the almost axiomatic military presentation model of tell them what you plan to tell them, tell them and tell them what you told them.   They also seemed usually more effective in handling the question and answer aspect of a presentation.

This above does not dismiss effective speakers of civilian background only; there have been a number, but again, anecdotally, the military background individuals usually proved the more effective speakers.   This said, the overarching observation was the criticality of speaking skill to the effectiveness of the military leader and for that matter any leader.  A person in a leadership role whose ability to organize effective thought and present that thought in an organized and well delivered manner tailored to the audience was in almost every case an effective leader.  Those who could not, were often less effective if not incapable of exercising leadership.

There were exceptions, but they were few.  A person cast as a leader who presented well to the audience being communicated with, for whatever purpose, and could speak in a manner appropriate to that audience with an organized and to a purpose presentation, as a speaker, typically proved an effective if not strong leader…even when soft spoken.