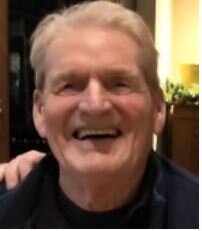 On the 5th of April, Larry Richardson advised us that sadly Dan “The Man” McCann had passed away, on the anniversary of the Royal Canadian Air Force, the 1st of April, 2021.

Larry mentioned that he has been cremated and that he will be interned in Rivers, Manitoba during the summer. Darlene is tentatively planning a small memorial in Trenton in June. Larry indicated that life had not been that kind to Dan in recent years since he had had a debilitating stroke several years ago. Fortunately, he notes that Dan had always lived life to the fullest and will never be forgotten by those who knew him best. In fact, he remarked that it was just like Dan to have passed away on April Fools Day! He was such a popular Classmate that not surprisingly his passing prompted great sadness but also many fond “memories” – or as Dan used to say about such stories – “I don’t care if they are true or not just as long as they are good!” 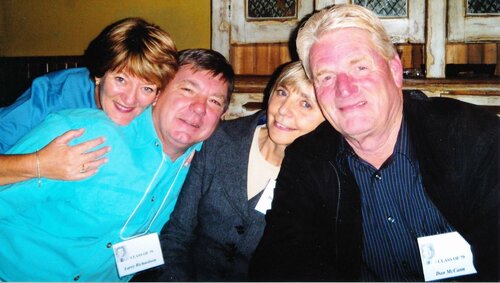 Dan and Darlene with Larry and Pat at a Reunion at RMC.

Larry: Of note, Larry aka “Ritchie” points out that all the UTPMs had nicknames and true to form, every one was given to them by none other than by Dan himself. In this regard, he goes on to say that his favourite story of Dan occurred during their second year at Royal Roads. The UTPMS used to form up in the castle before Sunday morning parades. One morning we were standing around waiting to go on parade and The Nose (aka Bob Wasney, who was Navy and who had had his nose broken several times in foreign ports) was frosting off his uniform with a lint roller. Dan looked at Bob and said, “I don’t know why you are worried about a little lint on your uniform, you have ink all over your body!” This was well before tattoos were generally popular but it was true – he had pigs on his knees, roosters on his hands and even anchors in, shall we say, other places. The stare Bob gave Dan still brings back a lot of laughs.

On another occasion, my wife Pat and Darlene were visiting Dan’s mom at a cottage north of Ottawa. Dan’s mom decided to teach the girls how to make quiche. Pat loved it so much that she fed it to me twice weekly for a couple of months. Finally I had to tell her that “Real Men don’t eat Quiche!”, only to find out that Dan loved quiche!!

Finally, to emphasize how small this world is, Dan and Darlene bought my Uncle’s house when they were posted to London, Ontario. When closing on the house, my Uncle (who is actually ten months younger than myself) asked Dan what he did for a living  Dan replied that he was in the airforce. My uncle said he had a nephew in the airforce maybe you know him. When Dan asked who that might be, my uncle replied Larry Richardson. Small world indeed. We are only in it for a short while and it is friends like Dan who make it worth while.

John “Ward Cleaver” Britten: I am so saddened by this news. My condolences to Darlene and the family.  Danny was one of a kind. Through our days at Roads, RMC and beyond, our Danny Boy was always the same person. He was indeed a friend to  the world. Don’t take life too seriously may well have been his mantra. I’m certain he had his serious side but I never saw it. His hearty laugh continues to echo in my memory.

Tom Wall – I first met Dan in the late 1960’s when we worked together as Met Techs in St. Hubert, Quebec.  I was already stationed there so when Dan arrived we were teamed together so I could bring him “up to speed” with the office environment.  I often teased him that I taught him everything he knew – although I take no credit, or blame, for the man he became after we parted ways!!  When we met again several years later as UTPMs, it was great to see he was the same great person – a positive, out-going and fun-loving guy who had time for everybody.  Marie and I were truly sorry to hear of his passing.  All of our love to Darlene during this difficult time.

Don McLeod – So sad to hear that! Dan and I had more than a few good experiences! I’ll never forget a time when we were doing exams at Roads – on the quarterdeck . It was a math exam and by alphabetical order Dan was in front of me! All of a sudden Dan calls our math teacher over and says “ Coach, you gotta help me!  I’m going to fail this!”  Peter did!!!  Help him that is!

Dale Godwin – Glad I got to see Dan and Darlene at the reunion. I would have regretted not going. Our love and sympathy to Darlene. Dale and Cleone

Jim Hutton – Really sorry to hear that. I will always remember Dan at RRMC.  He never had a hair out of place.  It was so perfect that some of thought he was wearing a wig – a New York Rug as we called it. 🙂

Steve Kelly: Note that Steve sent in a story about Dan and their experiences in Borden at BOTC in the summer of 1976. The story includes a photo so we have added them at the bottom of this page

Randy Smith – Really sad – it was Dan McCann and Don McLeod, the dynamic duo, who helped many of us get through Roads!

Ed Vos – Dan truly was a character, a loveable character. When I think of Dan, my mind immediately goes back to BOTC in Borden and morning runs. They weren’t Dan’s strong suit, particularly given the UTPM approach to such courses (a few beers after a hard day while the ROTPs studied or polished). Dan was always ready with a joke or funny quip to lighten the mood. As Randy Smith said, Dan’s upbeat spirit and sense of humour helped a lot of us through Roads.

Scotty Mills – Randy nails it on the head. Dan and Don the two UTPM who kept us artsmen at Roads in check and motivated. Dan always had a joke or a wisecrack no matter the situation. He made us chuckle or  brought a smile to many of our faces at those times we wanted to do anything but smile. RIP Dan, you were one of a kind.

Steve Nicol – Sorry to hear of Dan “the man’s” passing. As everyone has indicated he lightened up the mood at any activity especially at BOTC in Borden. He will be missed.

Larry’s note on the back of these photos indicate that they were taken at Dan and Darlene’s baby shower in the Kingston PMQs (for their son, Dan, as it turns out) 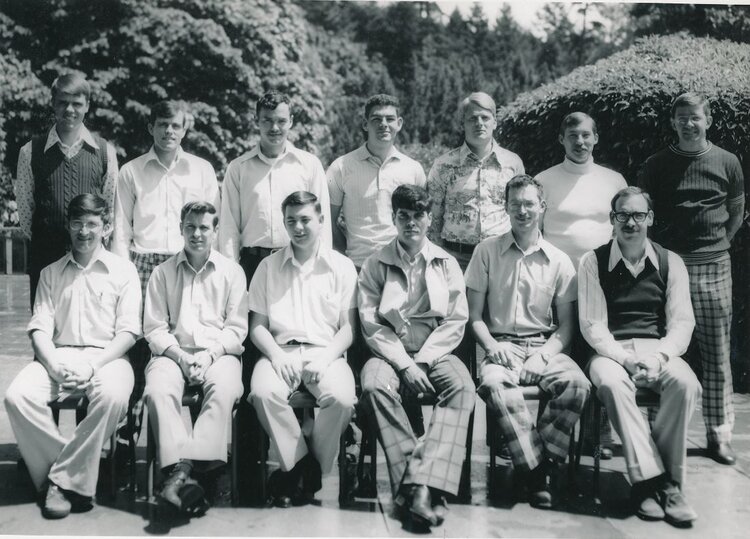 Dan third from the right in the back row – From the left backrow: Bill Hamastra, Jim Hutton, Ken Rozelle, Mike Guerard, Dan, Rick Touchette, Bob Wasney. Front row from the left: Randy Rodgers, Don McLeod, Larry Richardson, Steve Kelly, Art George, and John Britten. Larry notes this photo was taken in the fall of 1975 at Roads shortly after their arrival. 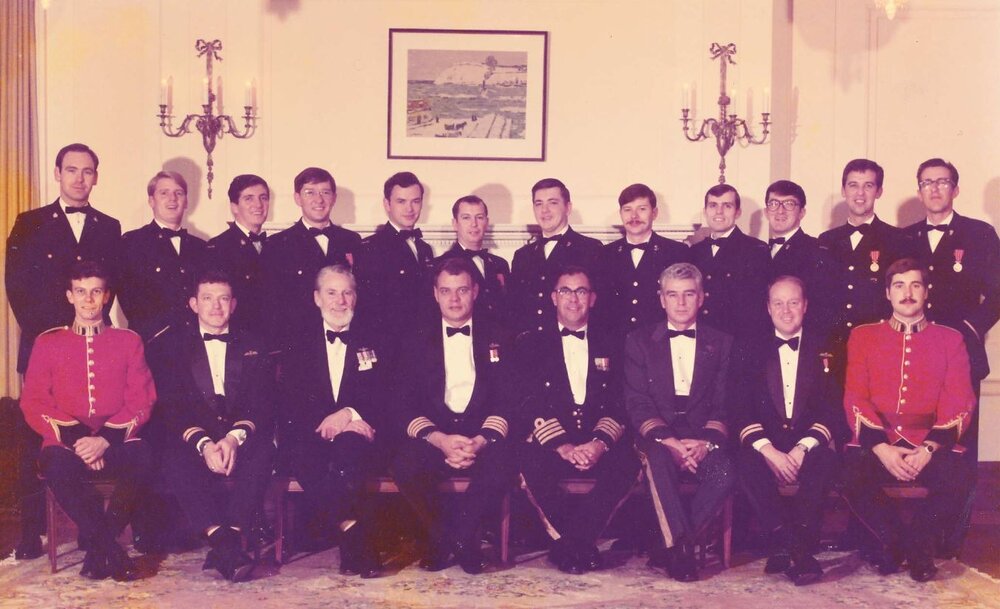 At RRMC with his fellow UTPMs.

Dan, back row second player from the left, with the UTPM hockey team. 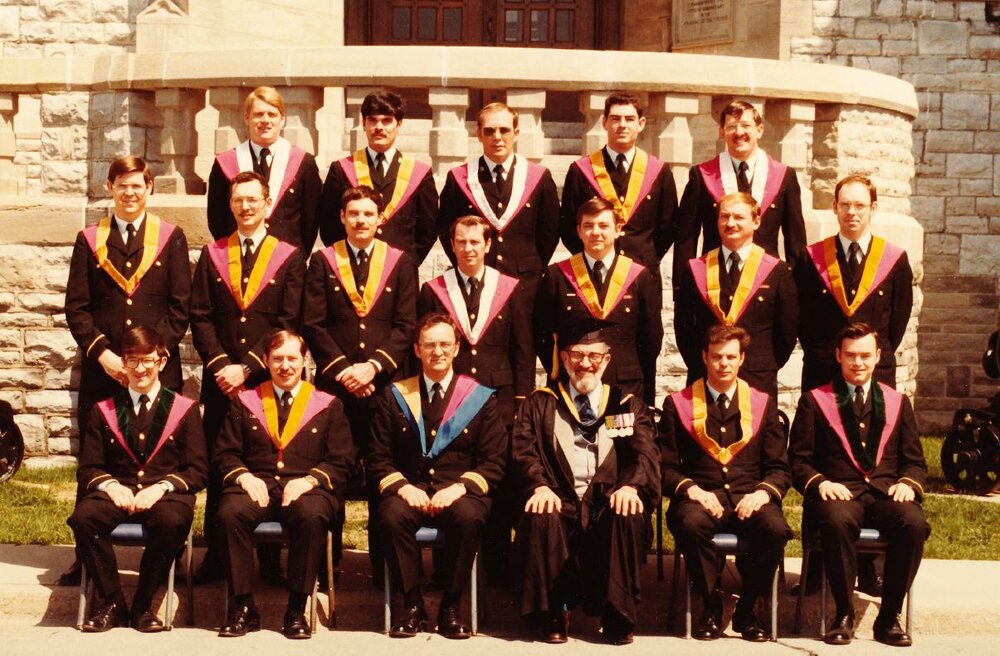 Dan, back row top left, at RMC in 1979 along with his graduating UTPM colleague and their mentor Dr. Walter Avis.

From Steve Kelly: As is well known by now, Dan loved nothing better than a good story, whether it was true or not, and so the “Senior Met Tech” at RRMC was always interested in hearing first thing Monday morning about what the single UTPM guys had been up to over the weekend.  Because he was older and held a rank senior to them prior to coming to Roads, the two guys Steve Kelly, the Patricia, and Mike Guerard, the “skimmer” (submariner slang for surface sailor), felt obliged to satisfy his curiosity, and even maybe embellish the odd exploit a little bit. 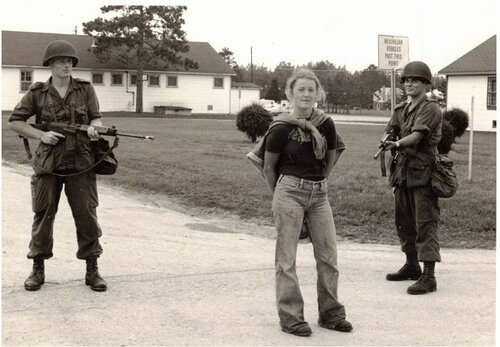 Dan’s curiosity did not change when the newly minted officer cadets travelled to Borden in the summer of 1976 to attend the Basic Officer Training Course.  It was a tough go, the worst of times, but it was also the best of times, especially as the course was ending and they could sleep in the quarters rather than the hoochies.  During the final security exercise, Steve and Mike were on patrol, and as luck would have it, they happened to notice a young female, coincidentally quite attractive, riding on a big green tractor.  They looked at one another and concluded quickly that she was obviously “suspicious looking” and determined that they needed to investigate further. After Steve flagged down the tractor, the young lady told them that she was a first year McMaster University student on a summer job with Construction Engineering who had just been hired.  However, she was not carrying any paperwork nor a pass, so who knows, they thought, she could be a terrorist.  Steve radioed Dan the Man for back-up. Sure enough he shows up … with a newspaper photographer in tow!  To be on the safe side, they agreed she should be taken to the Base Military Police for further “investigation”, with Steve dutifully present to keep track of all significant data, such as, you know, a phone number and address.  She was a good sport about the whole thing, but Steve, being the gentleman that he is, just wanted to make sure, so of course he took it upon himself to call her up the next day … and a few other times during the rest of the summer.  That photo Dan had arranged was later published in the local newspaper, explaining the “hardships” of Basic Officer Training!