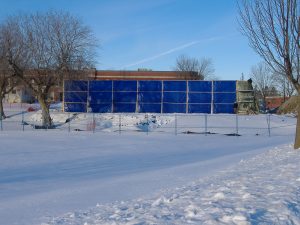 The late 2364 Commodore Leonard Birchall (RMC 1933) would be proud but likely very humbled if he were around this Reunion Weekend.  After all he was never one to seek the spotlight.

The newly constructed RMC sports pavilion will officially be named Air Commodore Birchall Pavilion, Sat, Oct 3rd – 1:30 PM. The ceremony will Involve, Mrs Kathleen Birchall, widow of Air Commodore Birchall; 9660 Cameron Diggon (RMC 1973), incoming president of the RMC Club / Foundation; a number of other dignitaries and key people involved with the project over the past five years. (See schedule of events near the top of this edition) The public are invited to attend.

The pavilion was a project five years in the making. Director of Athletics, Darren Cates who was involved from the very first phone call right up until the keys of the building were handed over to his department a couple of weeks ago met up with us recently and gave us some background and how it all happened. 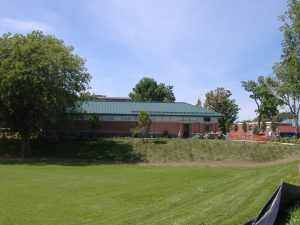 From your perspective tell us when / how the Birchall Pavilion got started. Who were the early key players? Why were they key? 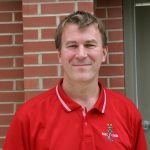 Two names spring to mind right away and deserve much of the credit for the building we now see today. I still remember the phone call with 3918 Al Roberts (RMC 1957) back in 2004 when we were discussing possible ways the Old Brigade could support the Athletic Department. Al was excited about the idea of a pavilion for our field sports and his enthusiasm and persistence was the real key to bringing the pavilion to the attention of the college. He made sure everyone kept working on the project and initiated the fundraising. Al deserves much of the credit for the pavilion. Personally I will never forget how much work Al put into the project and how committed he was to get others to support the pavilion.

The other key person was  13731 Steve France (RRMC RMC 1982), formerly of the RMC Foundation of Canada. He and his staff worked so hard on generating the funds for the project, organized a spectacular sod turning ceremony and brought many good ideas to the actual design of the pavilion. Steve was passionate about the building and like Al his efforts were critical to making the dream become reality.

What were the biggest challenges in the process from your perspective?

There was so much excitement surrounding the project I think the biggest challenge was managing everyone’s expectations. Lots of people had fantastic ideas on what should be included and what we should do but almost all of these required space and money, both of which were limited. I am sure Steve France and the RMC Foundation were challenged to raise the funds but knowing how passionate RMC alumni are I thought this would be accomplished in time which it was, ahead of schedule!

When did you know that the project would be approved? Right from the start there was a lot of enthusiasm for the pavilion. As I was fairly new at the time when this project got of the ground I never thought that the actual approval was a major hurdle. Everyone involved at the time, the Commandant, the Director of Physical Plant just wanted questions answered and when those answers were being provided I was fully confident that the pavilion would be built.

Who were the key RMC staff involved at the time? What were their roles?

There have been so many and too many to name! This project has seen three Commandants, three Director of Cadets and three different Directors of Physical Plant (DPP) just to name a few. Everyone played a critical role in making this become a reality and I know everyone using the pavilion is appreciative of their support and efforts. Maj George Amirault, Maj Genvieve Lehoux and Maj Julia Atherly as DPP all worked extensively on this project. One person in particular, Dominic O’Neill of Defence Construction Canada was absolutely instrumental as he was the project manager and ensured that the pavilion met the requirements of the end users, the OCdts of RMC. Dominic kept us well informed throughout the process, had an eye for detail and cared strongly about the success of the project. Everyone that uses the building is particularly indebted to Dominic for his efforts. Bryon McConnell from Defence Construction Canada did a lot of the early work on the project before being reassigned and his efforts got the project off the ground and have not been forgotten.

What will be the main impact having this facility for RMC athletes?

I believe that in order to be a team a team needs a home. The Birchall Pavilion will provide a home for the women’s soccer team and the men’s rugby team. From August to November these teams will have a place to meet after class, prepare for practice or games and to go back to after they finish training or competing. We owe this to these student-athletes for all the efforts they put out representing RMC and the CF. I believe the pavilion will aid in team building and cohesiveness amongst the teams and will assist in recruiting new student-athletes.

Will both soccer teams and both rugby teams be using it? 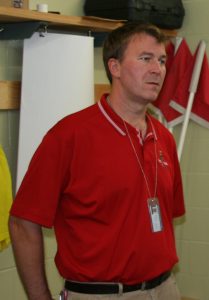 Hopefully the Birchall Pavilion will be used by more people than just the soccer and rugby teams! There are two public washrooms in the facility which can be used by OCdts during Intramurals, Physical Education Classes or squadron PT. They will also be great during the obstacle course for all the spectators in attendance.

The team rooms will be used primarily by the women’s soccer team and the men’s rugby team and on occasion the men’s soccer team has to play a game on the Navy Bay fields and in this scenario they would also make use of the facility. We will also be using the pavilion to host officials working games as there is a referee’s change room. CFB Kingston will also make use of the facility when they host regional and national level competitions.

What is the initial reaction from student-athletes?

Recently, I ran into IV Hawn, captain of the Women’s Soccer Team and V Heather MacLellan. I asked them what they thought of the team room in the pavilion and their faces spoke as loudly as their voices. Their excitement and happiness made it clear that these building means a lot to our current student athletes and will mean a lot to all RMC students forevermore.
Both the (W) soccer team and (M) rugby team have been making good use of the pavilion over the past couple of weeks dodging between construction workers who are busy putting the final touches on things.

Other points: The total cost of the Pavilion project was $1.6 million. This project was a partnership between the RMC Foundation and RMC/Public. The cost split was as follows: $950,000 RMC Foundation donations/$650,000 Public (from Chief Military Personnel).

The official name of the building, the Air Commodore Birchall Pavilion, was suggested to the Commandant by the RMC Club / Foundation. The Commandant of the day agreed and in turn RMC staffed a request to Director of History and Heritage (DHH) in Ottawa. Subsequently the name was approved by DHH.

The opening of the Air Commodore Birchall Pavilion will be an historical event. Rolande and I both plan on attending.

Next week we expect to post a perspective from the man who many close to the project perceive to be the driving force behind the successful fund-raising effort.  We will hear in his own words how the idea to construct a state-0f-the-art dressing room facility for RMC cadets all came about.  Look for it!