12193 BRIGADIER-GENERAL T.F.J. LEVERSEDGE, DIRECTOR GENERAL AIR PERSONNEL was the special guest of honour. His speech aimed mainly at the cadets in the crowd centered on the Korean War which began on 25 June 1950 and an armistice was signed on 27 July 1953.  His main message was  the tremendous role provided by RCAF pilots during this three year war flying the F 86  – which ws considered “cutting edge” at the time.

His presentation was of the highest quality, offering the audience insight into historical facts on the contributions of these RCAF pilots which is not overly well-known. The 1979 RMC Mechanical Engineering graduate is well informed on the subject. His excellent storytelling skills, kept the audience enthralled and entertained throughout the 20 minute or so presentation.

The PMC for the evening was Major Bruce MacLean, RMC Chief Instructor, who handled the chore with grace, humour – and regular use of the gavel. He ensured that the cadets, many of whom had little or no exposure to this type of formal Mess Dinner were aware of the many nuances and protocol surrounding this type of military function. He did all this without stifling any opportunities for the cadets to pull off a couple of pranks which were done in good taste. 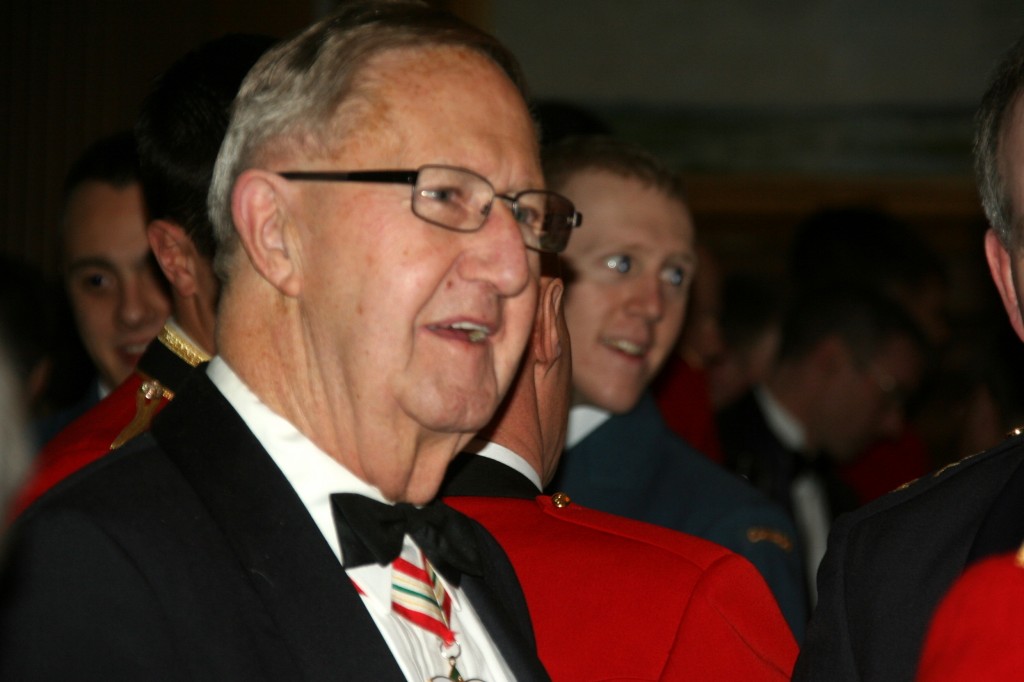 A special treat for the evening was the presentation of a “commandants coin”, by Commodore Bill Truelove to the highly popular and well known Honorary Colonel of the Canadian Forces School of Aerospace Technology and Engineering – William (Bill) Coyle. (Bio on Bill Coyle)

Colonel Bill Lewis, Head of the Department of Applied Military Science and Director of the Land Force Technical Staff Programme made the introduction; he high-lighted a number of air force contributions by the Honorary Colonel. “We have never had such a feverant supporter of the CF and the Air Force, his contributions to the CF have been numerous, but probably none more impressive than his recent participation with Hawk One and the Centennial of Flight Celebrations.”

All in attendance enjoyed a fine evening.  Major MacLean ensured the cadets learned a lot too! Last week, members of the RMC flying club visited the Ottawa/Gatineau area and toured Vintage Wings of Canada and the Canadian Aviation Museum. After touring the Vintage Wings hangar the cadets were treated to talk from RMC grad 15626 Rob Erdos (RRMC RMC 1986) on the fighters of the Battle of Brittan.

Mr. Erdos, who is now the chief test pilot at the National Research Council, gave a presentation on the handling of the Spitfire, Hurricane, and ME-109. The group of cadets was thoroughly taken by the engaging presentation and had the chance to talk with Mr. Erdos afterwards about his flying exploits, and briefly about his time at RMC. Afterwards the cadets went to tour the Canadian aviation museum and had a great time touring the aircraft.

All in all it was a fantastic day, and offered inspiration to the cadets to pursue their aviation dreams!