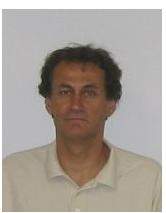 Michael T. Greenwood, PhD is an Assistant Professor in the Department of Chemistry and Chemical Engineering at the Royal Military College of Canada. He is a cell and molecular biologist. His research is funded by the Heart and Stroke Foundation of Canada, where he serves as a member of the Scientific Review Committee. His research interest in the regulation of programmed cell death is important since excessive programmed cell death causes increases in the volume of an organ or tissue (hypotrophy), resulting in shortage of the blood supply to an organ (ischemic damage), whereas an insufficient amount results in uncontrolled cell proliferation, such as cancer. The mitochondria are the power plants of a cell and are responsible for the majority of energy production. When mitochondria do not function properly, such as when tissue is deprived of oxygen, cells begin to die through a process involving rupture of the mitochondria. Blood flow causes injury to the brain, kidney and liver. When the blood flow is re-established (e.g. by drugs or a baloon angio plasty which open blocked blood vessels) there is a huge burst of reactive oxygen, and that’s when good cells die by apoptosis the same type of programmed suicide used to kill off malignant, infected, or defective cells.

Greenwood`s research with two graduate students involves discovering the most potent of the 70+ inhibitor of cell death genes (anti-apoptosis) that prevent normal cells from committing suicide through the analysis of mammalian proteins in yeast. His research partner, Dr. Hung, a cardiologist at the Montreal heart institute, is involved in studies and clinical trials in many different animal models e.g. mice, pigs. Since the severity of a heart attack or stroke depends on how many cells die, hypothetically you might prevent damage and protect the heart or brain by inhibiting the cell death. He earned a B.Sc. and a M.Sc.(Concordia). He earned a Ph.D. in 1992 at McGill with a thesis on `Isolation and characterization of Dictyostelium discoideum genes encoding a common proline-rich region`. 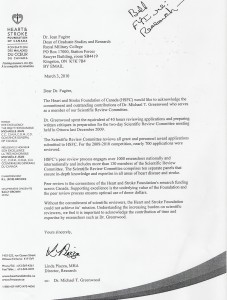 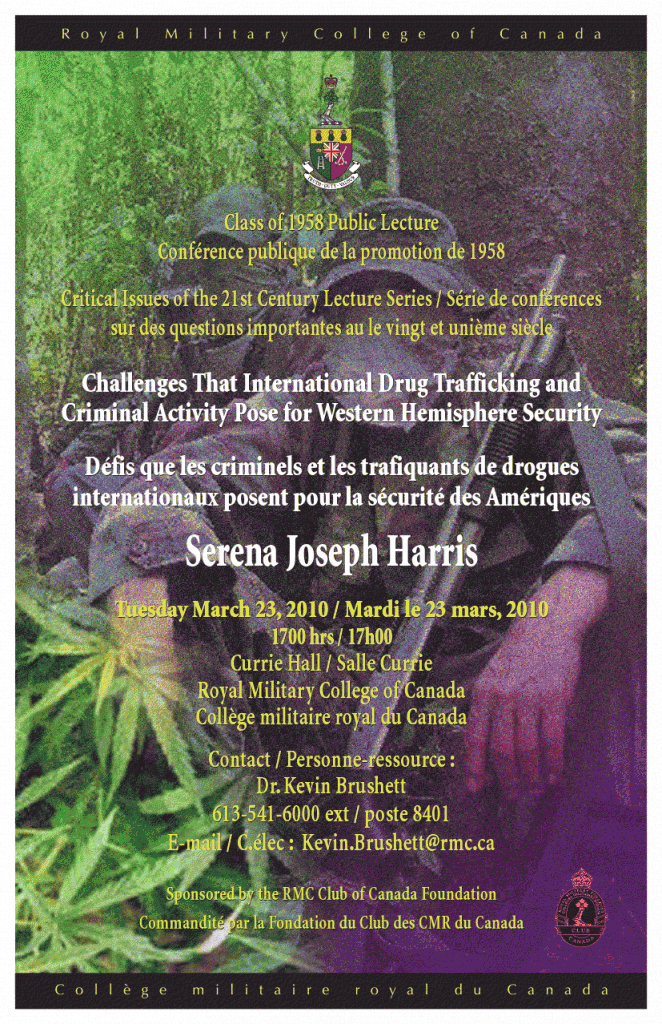 More on the Guest Speaker…

Mrs Joseph Harris was chosen to given the lecture because of her distinguished career as with the Strategic Services the first legally constituted civilian intelligence agency established in the English-speaking Caribbean to deal with issues of the illegal trade in narcotics, firearms, money laundering, as well as issues of terrorist financing and cyber security. As such she has a direct reporting line to the Chairman of the National Security Council of Trinidad and Tobago. Her work has also been central to the work of the Organization of American States (OAS) as well as the European Union and the United Nations in these areas. She also comes with glowing recommendations from current and former CF commanders, notable defence and foreign policy think tanks, and the Canadian High Commissioner in Trinidad & Tobago.

Given the increased focus of Canada’s foreign and defence policy on matters of hemispheric security and development, as well as our cooperation with US Southern Command the Principal and the Class decided that Mrs Joseph Harris’s area of expertise was pertinent for RMC Cadets (the premier focus of the lecture series) to understand as they prepare to assume their careers in the Canadian Forces.