After spending the 1916/17 school year at the Royal Military College in Kingston, Ontario, my father, 1272 A. Kelso Roberts, was sent overseas with all the other junior officers in his class who were at least 18 years old. As there were no vacancies in the Canadian permanent army, he was gazetted to the Royal Field Artillery in September 1917. After three months of training in England, he was sent to France and the 46th Howitzer Brigade and by mid-February he was given command of a section consisting of 12 men and two guns. The next few weeks were spent in digging his section in along the front, positioning his guns and working out their fields of fire.

At this stage of the war the Germans realized that they had one last chance to win, what some called a “final roll of the dice”, and they launched a last great onslaught on 21 March 1918. The timing was important because the Americans had not yet begun to arrive, so if victory was to be achieved it had to be done before their presence could become decisive for the Allies. There were several good reasons for the Germans to be optimistic because the British and French armies were exhausted after heavy fighting that had gained them some ground and, most importantly, with the Russians out of the war, the Germans were able to transfer quickly 1,000,000 soldiers and 3,000 heavy guns to the Western Front. The German General Ludendorff also succeeded in giving the impression he was going to attack where he wasn’t, leaving the British Fifth Army unsuspecting and unprepared for a major enemy assault.

It was exactly in this area with the British Fifth Army that my father’s section was located. As recorded in Martin Gilbert’s The First World War – A Complete History, on the first day of the onslaught, following a five-hour artillery bombardment, during which my father was nearly killed on at least three occasions (as recorded in his diary), the German infantry left their trenches and attacked the British line, making advances of up to four and a half miles and taking 21,000 prisoners, one of whom was my father. Even as his guns “were blazing away on targets”, the Germans simply went around my father’s pit because the British infantry was soundly beaten leaving the artillery unprotected. Suddenly, “we heard the ‘ping’ of bullets in the rear of us. Gunner Goldsmith and myself looked over the top and, lo and behold, a group of about 50 Germans was not 15 yards away in the mist. I saw a revolver aimed and Gunner Goldsmith fell on top of me shot through the temple. In an instant they were on us. We were defenceless.”

So my father was taken prisoner. In fact he was taken prisoner twice that day, since he managed to escape during the confusion on the battlefield, but the British unit he linked up with was soon overrun in its turn and he was taken again! The following weeks, as described in his diary, were absolutely horrible with practically nothing to eat, but on 10 May he was transferred to a prison in Lahr, Germany where conditions were somewhat less bad (there was little fighting in Germany during the entire war). 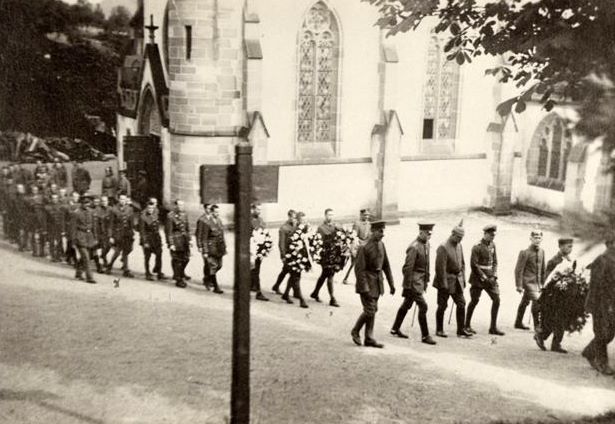 A final Anecdote from the diary: “I have heard today (26 June) that two Canadian airmen were killed near here. They were brought down in the Tuesday morning raid. The next day we fell in to go to the funeral [of these airmen]. Three other officers and myself were in the leading four, each carrying a wreath appended to each of which were two white ribbons with the inscription in Memory of Two British Airmen Killed near Lahr from British Officers Prisoners of War. We marched to the little chapel at the cemetery with the coffins being carried by German soldiers, we following behind. [Someone took the accompanying photo which was later given to my father, who is on the left in the front rank.]

“A band played The Dead March and we slowly marched to the grave where the burial service was pronounced in German while overhead German airplanes flew about paying respects to a fallen foe. The German airman who brought the two men down came forward after the caskets were lowered into the grave and saluting said, ‘Unsere Englisher Kameraden we, the German Air Service pay our last respects to you who fought bravely and died for your cause.’ He then placed his wreath upon the grave. We followed and placed our four on. The German Colonel and all of us, in turn, threw a handful of earth. I hope to learn the names of these two Canadian airmen and may someday be able to inform their relations about their last rites.” How differently were the airmen treated from the ordinary soldier!

An appalling average of 5,600 soldiers from all sides were killed on each day of the war (ibid, Martin Gilbert). Although my father was not one of them, he suffered for years from the ubiquitous poison gas he encountered during his relatively short time on the battle front. His experience in the war, and the depravations he suffered and observed others suffering, made his country seem “of greater value to me today than ever before”, as he wrote while still in the early days of his captivity and suffering terribly. We must remember – it is what he, and so many other survivors of World War I, wanted.