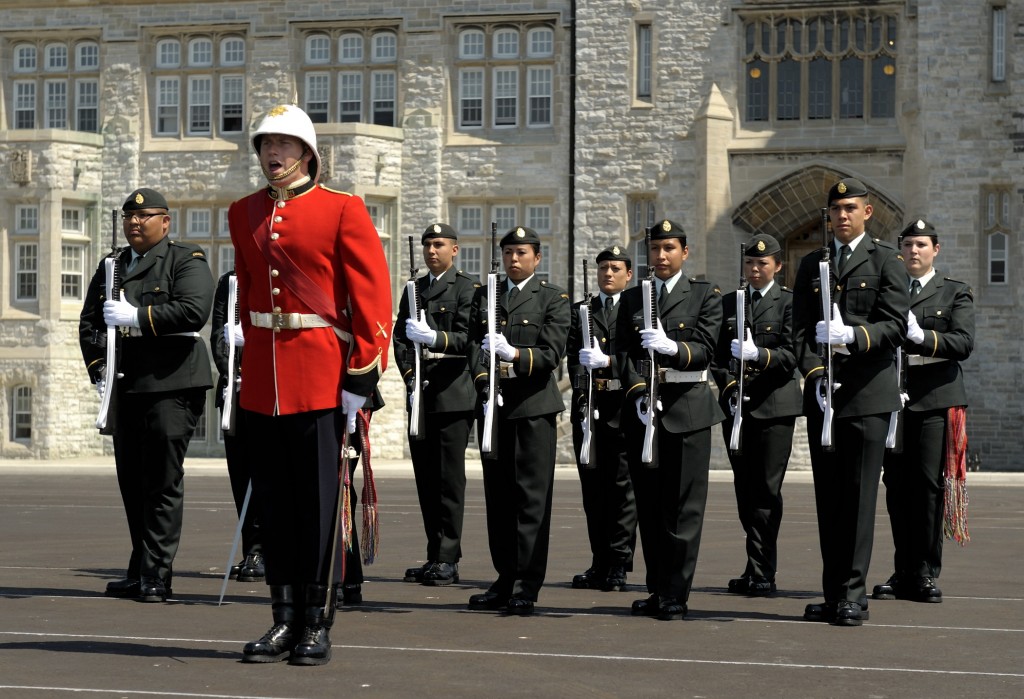 The ALOY Program commenced in August of 2008, accepting Aboriginal students from across Canada to participate.

This year’s program commenced with 11 students and 10 of those students have successfully completed the program requirements.

At the end of the academic year the students embarked on a month long leadership training period and culminating in a student led Final Test Exercise and canoe trip down the Rideau Canal.

During this phase students were tested on their leadership abilities and how well they were able to plan tasks, issue orders to their group and successfully execute an assigned task. The ten graduating OCdt’s demonstrated they have the abilities and potential necessary to develop into effective future leaders of the community and seven have decided to continue on with service in the Canadian Forces. 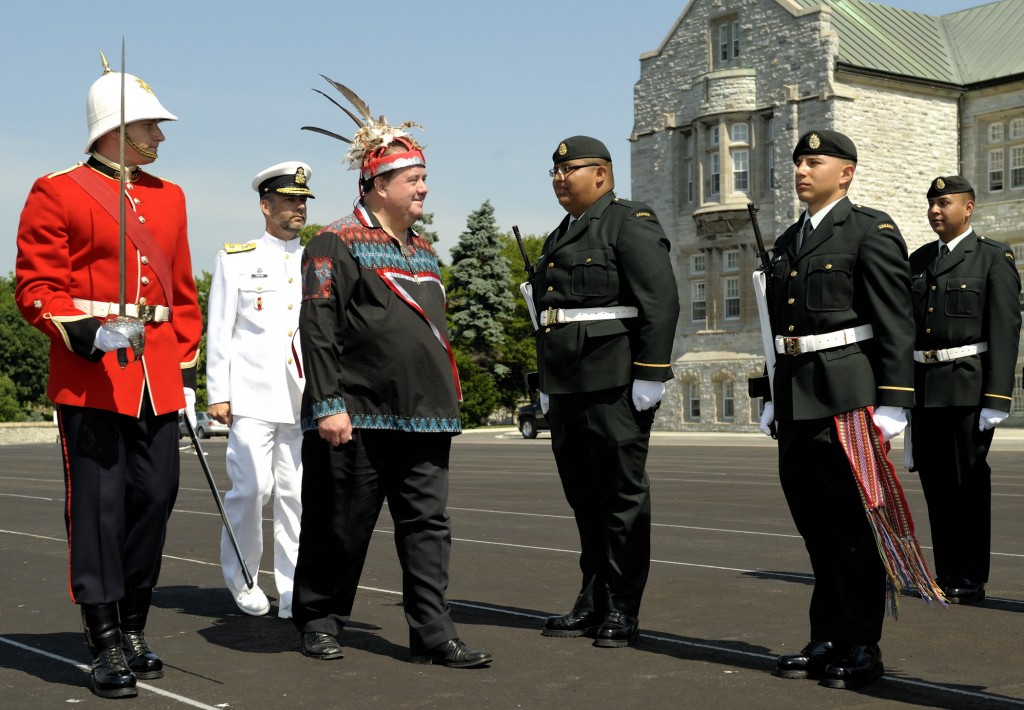 Chief Donald Maracle has served as Chief of the Mohawks of the Bay of Quinte for fifteen consecutive years since 1993. Previous to that, he served for twelve years on the Tyendinaga Mohawk council while employed as Finance Officer at Indian and Northern Affairs Canada.

He also sits on the Ontario Chiefs Committee on Health and the Association of Iroquois and Allied Indian Chiefs Council. Chief Maracle has served as the director of First nations Technical Institute and is a member of the Ontario Heritage Foundation.

The Commandant and Chief Maracle presented the 10 graduates with their Certificates of Achievement:

OCdt Abel is a First Nations Gitskan from British Columbia. He will be departing ALOY to attend University in Vancouver BC and will be enrolling with a Primary Reserve Unit in the area to continue on with the Canadian Forces.

OCdt Beaulieu is a First Nations Ojibwa from Sandy Bay Manitoba. He will be departing the ALOY Program to return to Winnipeg and attend University. He will be pursuing a career in policing eventually enrolling with the Royal Canadian Mounted Police.

OCdt Bouffard is a Métis from Timmins Ontario. She has been accepted to the ROTP program at RMC and will commence as a first year student at the college as an Air Logistics.

OCdt Ducharme is a First Nations Ojibwa from Hollow Creek, Manitoba. He was accepted into the Regular Officer Training Program here at RMC but has decided to pursue other educational opportunities in Manitoba. He plans to enroll into the Primary Reserves in Winnipeg.

OCdt George is a First Nations Heiltsuk from Bella Bella British Columbia. She has been accepted into the ROTP Program  at RMC and will commence as a first year student at the college this fall as a Logistics Officer.

OCdt Mayer is a Métis from Kimberly British Columbia. He has been accepted into the ROTP Program here at RMC and will commence as a first year student at the college this fall as an Armored Officer.

OCdt Perron is a First Nations Kwak-wak-ya-wak from Vancouver British Columbia. He  has been accepted into the ROTP Program  at RMC and will commence as a first year student at the college this fall as a MARS Officer.

OCdt Sabourin is a First Nations Dene from Fort Providence North West Territories. She will be attending classes at the College Militaire Royal in St Jean Quebec which will prepare her for enrolment into the ROTP Program.

OCdt Sudlovenick is an Inuit from Iqualuit Nunavut. OCdt Sudlovenick has been accepted into the ROTP Program  at RMC and will commence as a first year student at the college this fall as a MARS Officer.

OCdt Vermeulen is a First Nations Ojibwa from Big Lake Ontario. She has been accepted into the ROTP Program and will be attending Civilian University under the Nursing Program.

Congratulations to the 10 graduates; hats off and a well done to all those who were involved in the 2010 ALOY program. 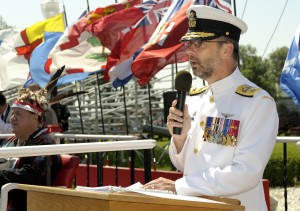 Commandant’s Speech for the ALOY Graduation

Good morning and welcome to the Royal Military College of Canada. It is a great pleasure to be with you today.

Canada’s First Peoples have made a significant contribution to our country’s military throughout our history.

Aboriginal peoples established themselves as important allies to the British during the American Revolution of 1775 and in the War of 1812, as well as during the Boer War in South Africa.

Thousands of Aboriginal men and women participated in World Wars, the Korean War and the Gulf War, with many earning citations for bravery. Combining traditional hunting skills with military expertise, Aboriginal soldiers made excellent snipers and reconnaissance scouts.

On each occasion, they overcame cultural challenges and made impressive sacrifices and contributions to help our nation in its efforts to restore world peace.

Today, this proud tradition of service continues at home in Canada and around the world.

(Aboriginal Summer Youth Programs such as Bold Eagle, Raven and Black Bear conducted in Alberta, British Columbia and Ontario respectively, provide the opportunity for youth to uphold this proud tradition of service.)

(Pre-recruit training under the banner of the Canadian Forces Aboriginal Entry Program conducted in British Columbia and Nova Scotia provide aboriginal candidates the opportunity for a 3 week introduction to the Canadian Forces, with many going on to enlist.)

The Royal Military College is proud to be the home of the Canadian Forces Aboriginal Leadership Opportunity Year – or ALOY and today we mark the graduation of this year’s ALOY class.

These cadets were challenged from the first day they arrived in a broad range of areas.

Not only did they have their own busy timetable to manage, but they had to juggle aboriginal and cultural practises, academics, field trips, sports and fitness training, military training and their academics – all the while learning how to work as a part of a team.

No small feat for anyone to accomplish and these graduating cadets are to be commended.

The decision to join the ALOY program was not insignificant for these young folks.

They committed to leaving their families and communities to come here to RMC to learn and grow.

Fighting off homesickness and experiencing complete culture shock is a battle that most faced at some point.

ALOY is not an easy program and the accomplishments of these graduates are noteworthy, and the source of great pride for me and I think, for all of you as well.

This important occasion is shared today with families and friends, some of whom are visiting RMC for the first time. Welcome!

It is because of your care and support that these students were successful in this program and for that, we thank you.

We thank you also for your support to the Canadian Forces and to Canada.

We thank you also for putting your trust and confidence in RMC and for allowing your son or daughter to attend this historic institution.

As you look upon these graduates, know that they have grown in spirit, developed self-confidence and will serve your country with distinction in the future.

This is the second year the ALOY program has been offered here at RMC.

As I’m sure you appreciate, programs like this require considerable planning and effort, and there are several contributors to the ALOY program whom I would like to recognize at this time:

Members of these organizations have worked together to support and promote the ALOY program, helping to ensure its success.

A little closer to home, a thank you needs to be extended to Elder Bernard Nelson for his leadership and commitment to the program. I want to personally thank him for his wise counsel and friendship throughout the year.

The ALOY Squadron Commander, Bob Thibeau along with Sergeant Rob Taillon. These gentlemen have devoted immense time and effort to the success of the program and to each of the students on parade today.

I have been exceptionally impressed with their commitment and determination to see of these cadets succeed. Gentlemen – thank you for your leadership and service.

Ladies and gentlemen – please join me in a round of applause for all of these folks.

To the ALOY graduates, congratulation and well done to you all. You are the leadership of your communities and well on your way to success in your lives.

You exemplify how aboriginal people will continue to contribute to the Canadian Forces and Canada by upholding a very long and proud warrior tradition.

You have set a high standard of excellence over this past year, and I commend you for your accomplishments at RMC.

You have much to be proud of, individually and as a team, and I would be honoured to serve with you in the future.

As you prepare to leave us today, please reflect on all that you have accomplished over the year.

Appreciate the great strides you have made both in your education and training, but also in your cultural awareness and the many wonderful relationships you have built.

Many of you will return to RMC next year to commence the full ROTP program and I look forward to seeing you back. Your selection to ROTP is, in itself, yet another important indicator of the great potential you have demonstrated.

To those going on to other places, I wish you every success and hope that you will remain connected, in some way, with RMC and the Canadian Forces.

To all of you, I say thank you very much for your tremendous contributions to RMC over the past year. You have made this College a better place and, in many ways, have educated us. We are better Canadians because of you.

In closing, I wish you and your families every success in the future. Enjoy some time off over the remainder of the summer and best of luck to you all in the future.