12944 André Durand (CMR RMC 1982) has been the red and white coordinator for the Quebec region since 2004 and he has been involved as president of the Montreal chapter of the RMC club. He left CMR after second year and later completed a Bachelor of Military Arts and Sciences at RMC via distance education. Before retiring from the CF, he served as OC of the Prep Year at the Campus du Fort Saint-Jean in Saint-Jean-sur-Richelieu. 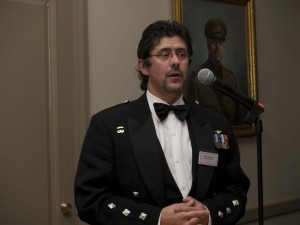 eVeritas: Were you responsible for any facet of cadet discipline at Campus du Fort Saint-Jean, with the Preparatory year? André

André: As the Commanding Officer, with 1 Sgt and 1 Cpl, I was more or less all by myself with 130 officer cadets. I had some concern initially about maintaining command and control of the students, particularly if they did not wear a uniform. I learned thed trust, and to coach the cadets as future leaders. Over 5 years as commanding officer, there were very few
cadet discipline cases, perhaps one or two proceeded to the summary trial level. Many of the cadets I worked with are currently serving at the Major and Squadron Commander level and doing very well. As OC, I believed that future military officer would benefitted more from extra study, military training, and `volunteer` leadership opportunities such as umpiring or running a broomball clinic than in running (more) circles or shining brass. We have to be innovative and use coaches skills with our youth.

eVeritas: What is the projected intake in RMC Saint-Jean for 2009…in the future?

André: We expect 250 students: 125 in prep year and 125 in first year. We are trying to reach our goal of 300 students at RMC Saint-Jean. The orientation camp at RMC Saint-Jean runs from August 4th to September.

eVeritas: What would you like to see in RMC Saint-Jean`s future.

André: I see the closure of the CMR Saint-Jean as a Canadian Forces university in 1995 as a mistake. Personally, I did not see the closure coming and had discounted rumors at the time of possible closures of Canadian Military Colleges. When RMC Saint-Jean reopened in 2008, I was delighted. I don`t know if RMC Saint-Jean will ever be a Canadian Forces University with specialization in business administration like it once was. I can foresee increasing the intake at RMC Saint-Jean down the road to 750 or so divided between prep and first year, to meet the evolving needs of the Canadian Forces. In the mid term, RMC Saint-Jean could potentially take responsibility for all of the preparatory students, first year students, and the second year Arts and Social Sciences students while RMC of Canada, in
Kingston take responsability for all the second year Sciences and Engineers, third and fourth year. I would like to see more non-native English speakers at RMC Saint-Jean improving their French language skills to promote success in further study at university and in their military careers. With academic training, social interaction (dating) and participation in sports, cadets can pick up a tremendous amount of culture and language within a year. I see both institutions (RMCC and RMCSJ) being indissociable but with their own niche. RMCSJ being the CF “CEGEP” while RMCC being the CF University. The CMC’s must be the way ahead and promote our two funding cultures. I feel that too many future officers miss an unbelievable opportunity in not being able to study and spent at least a year at RMCSJ, in a French-Canadian culture environment. 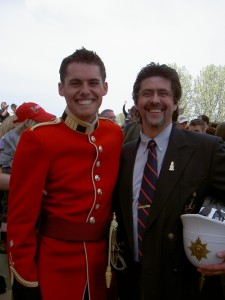 eVeritas: Your son recently graduated from RMC in Kingston.

André: Yes. I believe that RMC Kingston is an excellent place for French Canadians like my son to study. My son 24267 Renaud Durand (RMC 2009) was one of six francophones who graduated last May, 2009 in aeronautical engineering from RMC Saint-Jean. The ratio teachers/students is incredible and no other uniniversity in the world can beat that.

eVeritas:You mentioned that you would like to see more NCMs at RMC Saint-Jean.

André: Yes. I would like to see a role for RMC Saint Jean in the delivery of the diploma in Military Arts and Sciences program, which provides Non-Commissioned Members (NCMs) of the Canadian Forces a comprehensive knowledge of leadership, critical thinking, security studies, resource management, and communication skills deemed essential to the functioning of modern military. Upon successful completion of this program, graduates may be provided with advanced standing in the Bachelor of Military Arts and Science offered at the Royal Military College. Currently, the Military Arts and Sciences program is made possible by a partnership between Royal Military College (RMC), the Canadian Defence Academy, and various Community Colleges and CEGEPs. I can also see RMC Saint Jean providing members of the Canadian Forces (regular and reserve, current and former) upgrading and training courses, which are currently offered at civilian community colleges & CEGEPs.

eVeritas: You mentioned that small is good (for leadership).

André: Absolutely. RMC Saint-Jean, with its low teacher to student ratios, tends to stimulate leadership development. In prep and first year, the students tend to be hungry for leadership responsibility. Let’s not forget that they were enrolled because of their attributes and leadership potential. I realized, for example, that only half of the officer cadets could swim. I had cadets who were qualified lifeguards at 17-18 who ran swimming lessons for their peers at the advanced, intermediate and weak swimmers.

eVeritas: Are there any military college traditions which you would not keep?

André: I remember being told to walk along the walls and not over the RMC crest painted on the floor, at the Ocdt’s Mess because it would be disrespectful to the college logo. I didn`t think the tradition made sense since the architects` design idea was clearly to walk on the floor.

eVeritas: I understand that the ALOY program will be initiated at RMC St-Jean in August 2010.

André: The Aboriginal Leadership Opportunity Year (ALOY) is an outreach program that will expose chosen aboriginal candidates to an environment where they will have the opportunity to undertake academic
education, acquire military skills, develop leadership abilities and engage in athletics. This program seeks to foster leadership and personal growth in a supportive and challenging learning environment, and provide Aboriginal individuals with the opportunity to serve Canada in a leadership role, potentially, but not necessarily through employment in the Canadian Forces (CF). This one year program is already offered at the Royal Military College of Canada in Kingston, where the second group of about 20 candidates began training in August 2009 at RMC Kingston. The Program will also be initiated at the Royal Military College Saint-Jean in August 2010 with a group of approximately 30 canditates.

eVeritas: What do you tell potantial candidates about military colleges?

André: Military Colleges provide Officer Cadets with excellent training, interesting challenges and rewarding unique experiences. In addition to receiving a quality education, Officer Cadets are given progressively increasing responsibilities in order to develop leadership skills. The education at RMC Saint-Jean is based on the four components of the Canadian Military Colleges program: academics, athletics, bilingualism and leadership. With a low teacher-student ratio, RMC St Jean, like RMCC at Kingston, is special because of the quality of teaching, educators, facilitators and staff. For more on academic and social life at RMC Saint-Jean see: http://www.forces.ca/interactive/rmc/saintjean/index.html.

eVeritas: What do you tell potential candidates about the social and cultural life in St-Jean?

André: The Officer Cadet’s social life begins at the mess. This is where military staff and civilian personnel can get together for parties, social gatherings or even more formal activities. The mess is also an ideal place to foster unit cohesion and friendship. The town of Saint-Jean-sur-Richelieu offers many attractions: movie theatres, excellent restaurants, concert halls, museums and shopping malls. Because Montreal is located a mere 20 kilometres from Saint-Jean, Officer Cadets from every province will have the opportunity to discover this culturally diversified metropolis.

André: The RMC Saint-Jean offers college-level academic programs to officer cadets who have been accepted into the Regular Officer Training Plans (ROTP). Students who begin their studies at RMC Saint-Jean must complete their university studies at RMCC in Kingston. Students at RMC Saint-Jean register in either the Science or Social Science program. Officer Cadets in the Science program can be admitted to any of the science or engineering programs at RMC in Kingston. Since some Arts programs at RMC in Kingston require prerequisite courses, students should ensure they complete these prerequisites at Saint-Jean. Unfortunately, RMCSJ is not well known enough, particularly outside the province of Québec

eVeritas: How do preparatory year and first year at RMC Saint-Jean relate to CEGEP and to RMC Kingston?

André: The first year at RMC Saint-Jean is equivalent to a preparatory year of pre-university studies (CEGEP1). It is equivalent to grade 12 in provinces outside of Quebec. Students who successfully complete the preparatory year are automatically admitted as a first year (CEGEP 2) at RMC Saint Jean or as a first year (Univ 1) at RMC in Kingston. The second academic year (CEGEP 2) at RMC Saint Jean is equivalent to the first year of univeristy in all provinces other than Quebec. Quebec students who have completed one year of collegial students in another Quebec institution (CEGEP)may also enter the Canadian Military Colleges either RMCC or RMCSJ at this level. Students who complete CEGEP 2 at RMC Saint-Jean will be admitted to the second year of university (Univ 2) at RMC in Kingston. If they have the credits, a “Diplôme d’Études Collégiales (DEC)” will be awarded by the Quebec ministry of Education.

eVeritas: What are the core courses at RMC Saint-Jean?

eVeritas: Is it possible for students to change academic streams at RMC Saint-Jean?

André: Yes. Since a program change can nullify the career choice,military authorities must first be notified to obtain their authorization. Once authorization is obtained, and if the student has the necessary prerequisites, academic authorities can proceed with the change. 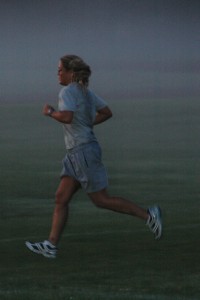 The Royal Military College St-Jean (RMCSJ) Orientation Programme taking place this summer is unique. Besides holding the usual four week Orientation Programme for the Officer Cadets who will remain at RMCSJ and those who will be attending Royal Military College of Canada in Kingston for the duration of the Regular Officer Training Plan (ROTP), RMCSJ is also holding a two-week Basic Orientation Programme for Officer Cadets attending civilian universities. This will give them a taste of the military before going off to their first year of university and ensure that they are fully cognizant of their new role in society.

The training includes basic military drill, physical fitness, lectures on military conduct, ethos, fundamental beliefs and skill building classes on public speaking and military writing. To achieve its goal, RMCSJ has chosen instructors among Officer Cadets who have completed their last year of the University Training Programme for Non-Commissioned Members (UTPNCM) and who are attending civilian universities themselves. This provides them with an opportunity to share their military knowledge and it benefits the recruits.

The variety of military experience and leadership the staff brings, and the fact that they too are civilian university students, has resulted in a well-rounded Orientation Programme. In only five days (at the time of writing) the recruits have gone from individual civilians to a strong and disciplined military team. This is a source of pride for the staff as well as for students; before putting away their pace sticks and receiving their commissions, the UTPNCM staff has ensured that 114 young Officer Cadets have the necessary tools to start their successful military careers.