Andre Labrie looking for “Buds” over 35! This afternoon game will precede the main event – West Point vs RMC scheduled for that evening at 7:30.

15992 Andre Labrie (’87) has volunteered to assist in rounding up the players for the two Ex Cadet / Alumni teams. A number of “buds” (ranging from the 1960s to the 1990s) have already confirmed their attendance.

The invitation is extended to those Ex Cadets who attended CMR, RMC  and / or RRMC.

Other “buds” who may be interested and / or who may require further info are advised to contact Andre at labriea@limestone.on.ca and Bill Oliver at oliver-b@rmc.ca. NLT 17 Jan. e-Veritas provide up-to-date news next week.

The plan at this time is to have “buds” (35 and over) play against each other. Teams will be selected by the grad year of the players. Red team will be even numbered classes; White team odd numbered. Both teams will be augmented by two former NHL players.

Final rosters will be announced (by Commissioner Labrie) just prior to the official opening of the game scheduled for 2:30. Every effort will be to balance the teams by age / excess weight / amount of gray / white hair / etc.

Players will be responsible to provide their own equipment. However, special arrangements can be made for those travelling long distances by plane.

To date the following Ex Cadets have indicated that they will be participating:

In addition up to 4 Ex NHL players will be lacing up and will be split between the two teams.

Note: We are waiting confirmation from a number of other “buds” to contact us.

In addition, from 5 to 7:15 PM, the RMC Club will host a “Pre-Game Warm-up” at the Fort Frontenac Officers’ Mess – just a two minute walk across the street from the game(s) venue. (Details for this event follows) 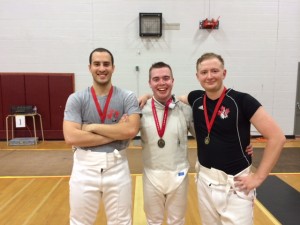 Congratulations to the RMCC men’s sabre team (Alex Whitehead, Justin Conroy and Jon Wilson) who won gold and women’s épée (Deanna Gilmore, Kalina Larocque and Victoria McCormick) who took silver on day 1 of the Carleton Invitational this past Saturday in Ottawa.

The highlight of the day was the comeback by men’s team captain Alex Whitehead, who erased a 40-31 deficit to beat Carleton 45-44 in the semi-final. The positive results: gold by men’s sabre and silver by women’s épée, the teams are looking good as they go into their final weeks of preparation for OUA Championships.