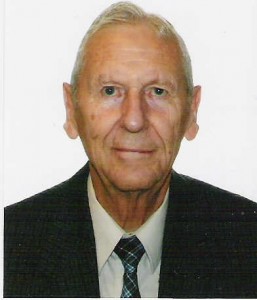 RRA5 Andrew Clarke (RRMC 1947) entered the Royal Canadian Air Force and was trained as a air navigator. He subsequently served as a navigation instructor in Winnipeg, the navigation leader of 408 (photo) Squadron in Ottawa, and at Air Force headquarters in Ottawa. While at Air Force headquarters he joined the World Federalists of Canada, a non government organization that supports a greatly strengthened United Nations. He became an active member of WFC almost immediately and established the organization’s first National Office in Ottawa during the summer of 1963. (He was a RCAF Squadron Leader by day and an exceedingly active world federalist by night).

In the fall of 1963 he was selected to attend RCAF Staff College in Toronto. At the end of his college year his staff college thesis concluded that international peace and security based upon nuclear deterrence, although considered essential at the time, was a short term expedient at best. A future for civilization on planet earth required no less than the abolition of war and its replacement by a system of enforceable world law. His thesis, titled Security in the Nuclear Age, was subsequently published in booklet form by the World Law Foundation.

As a military college graduate with early career success, Mr. Clarke was assured of a promising career. But in late 1965, WFC persuaded the Federal Government to grant him an early retirement from the RCAF to become the organization’s Executive Director. Leaving the Air Force and the security it provided his family was a high risk decision. Success in his new career, however, came quickly and in three years world federalist membership in Canada tripled to about 4,000 members, including over 100 Members of Parliament and Senators who formed the Canadian World Federalist Parliamentary Association.

In 1967 he became the founding Chair of the International Peace Academy Committee to train peace keepers for the United Nations. He later nominated Major General Indar Rikhye, the former commander of United Nations forces in the Congo, as his successor, and Major General Rikhye served in this capacity, and later President, for some 20 years. Mr. Clarke also encouraged Lieutenant General E. L. M. Burns and Air Vice Marshall Fred Carpenter to support the then newly established International Peace Academy.

In April 1968 he was asked to become Secretary General of the World Association of World Federalists (now the World Federalist Movement), and he served the organization in this capacity for over five years. He became a well known speaker on peace and security and chaired a World Congress of the Association held in Ottawa in 1970; keynote speaker at the Congress was United Nations Secretary General U Thant. During Mr. Clarke’s tenure as the organization’s Secretary General, a three day conference on the environment was held at Windsor Castle in March 1972. Among the some 20 persons in attendance was Thor Heyerdahl, explorer, Aurelio Peccei and Alexander King, co-founders of the Club of Rome, Jan Tinbergen, Nobel Prize winner in Economics, and Orville Freeman, Secretary of Labour in the Kennedy administration.

During more recent years Mr. Clarke served for several years as editor of Proceedings, the journal of the Canadian Association for the Club of Rome. Today, at age 82, he is in full agreement with Dennis Meadows, the lead author of The Limits to Growth (1972) and its two sequels (1992 and 2004), that “The changes we will all witness over the next two decades will be greater in most ways than the changes we saw during the entire 20th century.”

Andrew Clarke may be reached:  Aadc927@aol.com