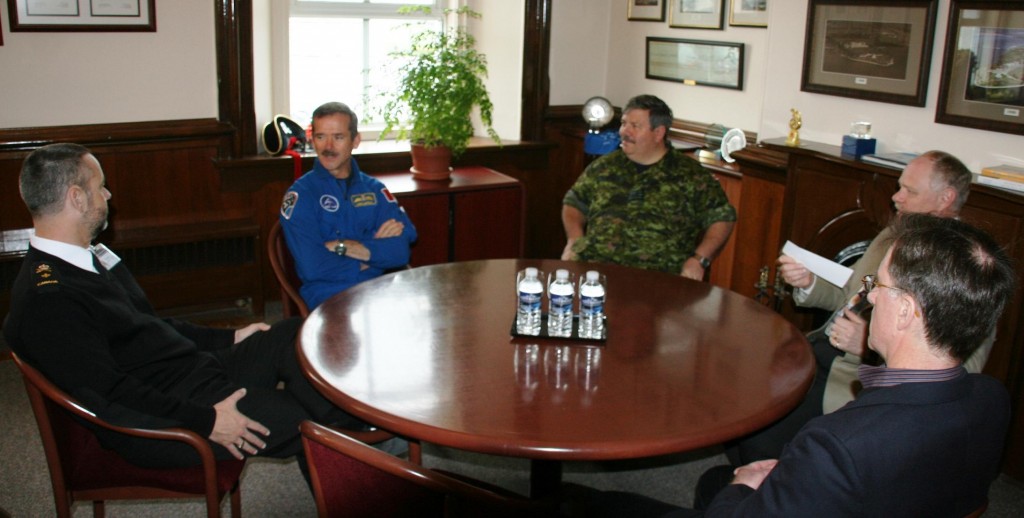 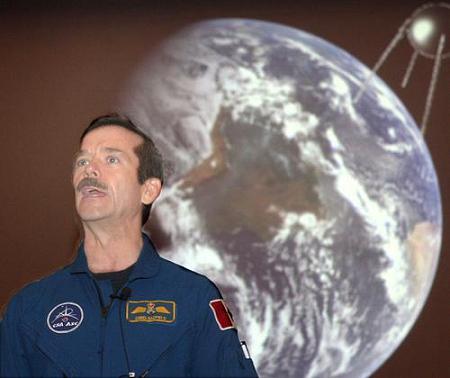 Chris Hadfield Talk at Currie Hall:Perspective of a I Year

This past Thursday saw the return of 13738 Colonel Chris Hadfield to RMC. Now an integral part of Canada’s Space Program, the former CF-18 pilot delivered a lecture on the International Space Station (ISS) and his experiences in space.

Before beginning his talk, Col Hadfield reflected that being back on college grounds put things into perspective. He told a packed Currie Hall that the skills he learned at the college have been useful throughout his life.

The talk commenced with a slide show. The first image: the 1957 Russian satellite Sputnik, the premier Earth-orbiting artificial satellite. Using this image, Col Hadfield took the cadets and faculty in attendance through a brief introduction of the space race. Not only was Canada was the third nation to launch satellites into orbit, but RMC was very well represented with fifteen space-visits made by graduates. The first Canadian in space was Capt (N) Marc Garneau, class of 1970. 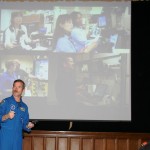 Col Hadfield was recently assigned to Expedition 34/35, and in 2012 will exit Earth aboard a Russian Soyuz spaceship from the same launch pad that Cosmonaut Yuri Gagarin, the first human in space, embarked. Furthermore, the RMC class of `82 grad will become the first Canadian to command a spacecraft when he becomes Commander of the ISS during the second portion of his six-month mission.

Col Hadfield went into detail about the differences between the Russian Soyuz rocket and the discontinued American Shuttle.

The Soyuz can remain docked at the ISS the entire mission, while the Shuttle had to return to Earth. Furthermore, unlike the Shuttle, the Russian rocket can land on any terrain. The astronauts and cosmonauts on the Soyuz are given advanced training in water, arctic, and mountain survival, as well as centrifuge training in pressure suits for when they re-enter the Earth’s atmosphere.

For the return journey, the Soyuz jettisons two of its three components which burn up in the atmosphere, and according to Hadfield, the crew experiences a “brutal way to come home”.

Outside the pod it is 3000ºC and in the best case scenario they are hurtling towards the ground at 4Gs. If it is a ballistic re-entry, they are moving at 8 or 9Gs. With the “help” of a parachute, the pod then impacts into the Earth’s surface. For this reason the seats of the pod are moulded to fit each crew member exactly. The Shuttle is no doubt a more “elegant” way to come home as it lands smoothly on a runway.

Continuing onto the ISS, Col Hadfield remarked that the number one hobby of those aboard the space station is looking out its window. He calls the experience “mesmerizing”.

He showed Currie Hall a photo of the RMC peninsula as viewed from space. Next was a photo of a Chinese city obscured by smog and polluted air. Most major cities appear this way from space. “Viewing earth from orbit puts everything into perspective”.

Next, Col Hadfield provided details about the ISS. It is double the size of the RMC parade square, and is powered by the sun. The world entrusted Canada with the task of piecing it together using the Canadarm from parts flown up by the Shuttle.

On board the ISS there is a huge collection of laboratories. About one hundred experiments are ran at a time, and six hundred have already been completed. The astronauts on board are entrusted to carry out these experiments on behalf of scientists on Earth.

Often the astronauts must go outside the ISS and perform space walks. They train extensively for these with water buoyancy training in space suits.

Col Hadfield described the experience, saying that on his right towards the sun it was 150 ºC, and on his left it was -150 ºC. He was attached to the space station by a tether, and if that failed he was equipped with a jet pack to use “before I drift off into space and they name a building after me here.”

Astronauts are also given extensive training in robotics at the Canadian Space Agency and NASA in Houston to learn to operate the Canadarm. Supplies for the ISS are sent up in unmanned vehicles and drift free in space until the Canadarm can reach out and grab them.

As for life in space, it is highly demanding on the body. After two minutes in a gravity-free environment the body begins to reject its skeleton, and because of this the first cosmonauts experienced severe osteoporosis and muscle loss following their missions. To combat this, astronauts exercise heavily in order to keep their bodies producing skeleton.

They must deal with day to day activities in a radically different environment, and even cutting their hair has complications. They must have someone holding a vacuum to their head while they cut so that the hairs do not float away and become lodged in the ship’s instruments. 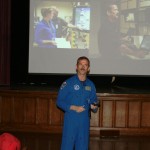 Col Hadfield remarked that “the food is pretty good, but like a perpetual deployment or a camping trip, it gets old quickly.”

When he has time off on the ISS he plays his guitar. “What an inspiring place to be”.

Col Hadfield finished his presentation by saying: “In my lifetime we’ve gone from Yuri Gagarin to now. People take for granted to progress made. It has been one long continuum of human invention.”

Next Col Hadfield took questions from the audience. When asked by a cadet where he hoped the Canadarm would go once decommissioned, he replied “my house.” He went on to say that Canada has built four of these arms and would like to have one back. It will likely be stored at the Canadian Space Agency.

“It has done wonderful things. It has put Hubble up there and because of that we now know the age of the universe.” 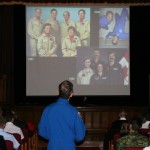 When asked what his most memorable moment was, he replied: “This was something I dreamed about as a kid. Flying in space is your dream coming true. It is a culmination of years and years of hard training and there is lots of pent up excitement to finally be there. Once in space you start to get a feeling of competence and you begin to understand that you have been well trained. You can fly, you are superman. When you look out your window there goes Mount Everest again.”

“The most memorable experience was space walking. The whole of creation is right outside of your visor and you are flying through the universe and the only link you have is this beautiful creation next to you (the ISS).”

The next question was about space tourism, and whether it was something we should be involved in.

Col Hadfield replied that every astronaut is a space tourist. “It is sort of like aviation in 1912; we can still do it, but it’s dangerous and you need special skills.” The tourists so far have given up a year of their life for the trip, which was spent training and learning Russian.

“We are in transition. The fight attendants’ brief takes nine months to deliver instead of two minutes.” 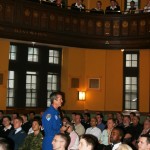 Next was a question on the psychological impact of being in space. Col Hadfield’s response was that to be physically and irretrievably removed from the world for six months, one needs to be able to deal with enclosed spaces and isolation. There is a lot of “hard, unrecognized, lonely work.”

“You need to learn how to take care of your people. You need to build a depth of trust and shared experiences as early as possible. You have to prepare for the worst, but we choose good people and they come back in good shape.”

Previously mentioned, Col Hadfield will be commanding the ISS in 2013, and said that “as commander, the job is no job at all if everything is going well. You must be constantly anticipating things going wrong. You must make increasingly difficult decisions if things do go wrong, and if disaster strikes it is your job to get the crew to safety. The military has prepared me for all of this.”

A cadet asked the space veteran where the space program will be in twenty years. His response was that it is becoming a more global pursuit. China now has a space program, and India is working on a rocket. Europe is also working on shuttle designs.

So where will we be in twenty years? Col Hadfield answered there are four possibilities: a new space station, another trip to the moon, an expedition to explore an asteroid, or a manned mission to Mars.

The RMC graduate finished his talk by wishing the cadets all the best with their exams, and imparted his final piece of wisdom to them: “The things you learn here will form the adult you will become.”

CKWS TV – HADFIELD VISIT: It was an out of this world experience for RMC cadets this morning.

Chris Hadfield had a few moments following his Currie Hall talk to chit-chat with cadets & staff. 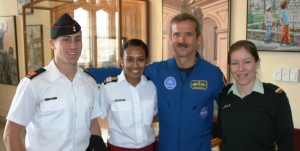 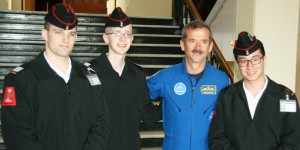