As Head Coach of the Royal Military College of Canada women’s soccer program it gives me great pleasure to announce today the eight-member recruiting class that will join the Paladins. The group includes four student-athletes from Ontario, three from British Columbia and one from Manitoba. 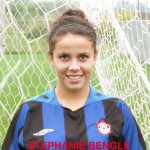 Stephanie Bengle (photo left) is from Oakville, ON and plays left full-back. Stephanie played in the Ontario Youth Soccer League (OYSL) for the Dixie SC and attended Oakville Trafalgar High School where she captained the soccer team. So great was her desire to serve her country, that despite interest and an offer from an NCAA Division 1 institution, Stephanie chose RMC as her post-secondary institution. Stephanie will be entering the Arts program and has been selected as a MARS officer.

Paige Campbell is a midfielder from Courtenay, BC. She is the daughter of Kathy and 14535 Jay (RRMC RMC 1984), her father being an ex-Cadet. Paige attended Georges P. Vanier Secondary where not only was she a member of the school soccer team, but also volleyball and basketball teams. She played her club soccer with Comox Valley United SC and competed in the last five BC provincial championships. Paige will be entering the Engineering program and has been selected for training as a Marine Systems Engineer. 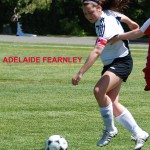 Adelaide Fearnley (photo left) hails from Gibsons, BC and can play both in midfield and defense. Fearnley had been with the North Shore Girls Soccer Club playing in both the Metro BC league as well as in the Pacific Coast Soccer League. She attended Elphinstone Secondary where she was an honour roll student and participated in other school sports including basketball and track. Adelaide (Addy) will be entering the Sciences program and has been selected for training as a Naval Health Care Administrator.

Michelle Hamilton is a goalkeeper from Winnipeg, MB. Michelle is the daughter of Joanne and 15121 Don (RRMC RMC 1985), her father being an ex-Cadet. Hamilton trained with the Canadian Soccer Association National Training Centre in the Prairie Region for the last four years. She played her club soccer with Winnipeg South End United who competed for the Canadian Women’s Club Championship in 2008 & 2009. Michelle was also the starting goalkeeper for the 2009 Manitoba Canada Summer Games team. Michelle will be entering the Arts program and has been selected for training as an Army Logistics Officer.

Kelly Milliken is from Victoria, BC and was a goalkeeper for the Lakehill Soccer Club. She has played with both their youth teams and senior women’s team. Milliken attended Reynolds Secondary, where she also partook in the school’s center for soccer excellence (headed by former RMC men’s soccer head coach Steve Simonson). Kelly will be entering the Sciences program and has been selected for training as a Naval Combat System Engineer. Adelaide Milos (photo left with coach Chad Beaulieu – on arrival for Rook Camp) is a central defender from Belle River, ON. In 2008, as team captain she led her Tecumseh Soccer Club team to promotion into the OYSL; a first for the club. The OYSL is the highest youth league level of play in Ontario and Milos’ performances were key for the Tecumseh SC team. This season she transferred to the Caboto Strikers SC to play in the Ontario Women’s Soccer League to prepare for her RMC playing career. She attended Ecole Secondaire L’Essor (the same school RMC’s head coach Chad Beaulieu did) for two years before transferring to Belle River High School to finish her secondary education. Adelaide (Adi) will be entering the Arts program and has been selected for training as a Navy MARS officer.

Alanna Ormsby is from Ajax, ON and is a striker. Ormsby completed her first year of Engineering at Queen’s. Her brother, Scott, is entering is last year at RMC and Alanna is excited to be able to watch him graduate from the ‘inside’. She is playing in Ajax for the summer in preparation for the upcoming season. Alanna will be entering the Engineering program and has been selected for training as an Army Electrical & Mechanical Engineer.

Lisa Udegbunam is from Mississauga, ON and attended Cawthra Park Secondary School where she was a member of their soccer and cross-country teams. Udegbunam played the 2009 season with the Dixie SC in the OYSL as a midfielder. For 2010, Lisa transferred to the Toronto Lady Lynx Under 20 team that competes in the United Soccer Leagues (USL) under 20 division. Lisa will be entering the Engineering program and has been selected for training as an Army Engineer.

The eight recruited student-athletes represent the largest incoming class for women’s soccer since 2004, when seven players were welcomed. Personally, there is great satisfaction in this achievement when considering how competitive the ROTP/RETP enrolment is across the country. The amount of hours in emails, phone calls and paperwork on my behalf and each of the recruits behalves is massive but well worth it. The first preseason match falls on Saturday, August 28th at 1930hrs followed by a second match on Wednesday, September 1st at 1900hrs. Both games will be played at RMC on Navy Bay #4.  (click on photos for better viewing)