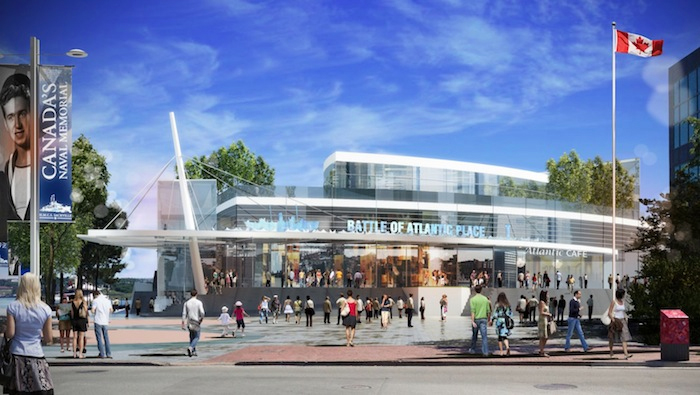 Battle of the Atlantic Place

When war was declared in 1939 Canada was primarily an agrarian country with a population of barely 11 million, limited industry and minimal military forces. Along with residents of the neighboring colony of Newfoundland, Canadians quickly rose to the challenge of total mobilization. Britain’s survival and the ultimate Allied victory in Europe were almost entirely dependent on the supply of men, materials, equipment and food from North America. As part of the Allied forces, Canadian ships and aircraft played a decisive role in this six-year campaign.

The Battle of the Atlantic encompassed the breadth of the ocean, from the Caribbean to the Arctic, off our own shores on the East Coast and in the St Lawrence to within a few miles of Quebec City. Canada played a crucial role in organizing and defending the shipping that plied these waters. The Atlantic was where Canada asserted its rightful place as a major Allied partner with the Royal Canadian Navy coming of age and the RCAF playing a vital role. Canada’s contribution in the Battle of the Atlantic was recognized with command of the Northwest Atlantic under Rear Admiral Leonard Murray — the only Allied theatre of war commanded by a Canadian. By 1944, Canada was responsible for the safe escort of all North Atlantic trade convoys, providing a major contribution to the forces hunting U-boats.

No other campaign of the Second World War so profoundly reflected the strengths and weaknesses of Canada’s economy. Shipbuilding witnessed a remarkable expansion on the East Coast, St Lawrence, Great Lakes and West Coast. More than 1,200 naval and merchant ships of different classes were built in support of the RCN, merchant navies and the Royal Navy, along with thousands of small craft. Most naval ships bore names of communities across the country. Ships built by the men and women of Canada were critical to the reinforcement and resupply of Britain and by 1945 shipbuilding was Canada’s second largest industry. Moreover, Canadian electronics and armaments industries provided much of the equipment carried by Canadian warships, while RCAF squadrons flew many Canadian built aircraft.

Canadians volunteered for active service in the tens of thousands and nowhere was this more evident than in the RCN. In 1939 the RCN had a dozen ships and 3,500 regular and reserve members; by 1945 this had grown to almost 500 ships and 110,000 men and women. Approximately 90 per cent of the wartime navy was made up of members of the Royal Canadian Naval Volunteer Reserve. The RCAF’s contribution to the Atlantic was also huge. Roughly a quarter of all air squadrons committed to the Atlantic were RCAF, while a quarter of all RAF Coastal Command crews were Canadian. Canadians also joined the British Merchant service and Canada’s newly formed Merchant Navy, which by 1945 numbered 178 ships and almost 15,000 personnel. Life at sea for members of the Merchant Navy was harrowing. Their ships were the primary targets of U-Boat attacks and almost 35,000 merchant sailors from allied nations were lost at sea.

Catalyst Consulting Engineers Inc. was engaged to provide project management services and steer the selection process for a Design Team. Ten consortia comprising companies from across North America and Europe responded to the call for submissions. After a thorough process, a jury, drawn from across Canada, selected Stantec Architecture to develop the design concept for the facility to be built on a 4.5 acre area site on the Halifax waterfront.

Stantec has conceived a stunning LEED ‘gold performance rated’ structure with striking glass facades, vaulted halls and galleries, and public spaces offering spectacular vistas of Halifax Harbour. BRC Imagination Arts, an international interpretive design firm, has created a storyboard designed to provide a unique experience that will excite visitors of all ages. The experience will be extended across the country by linking those hundreds of communities across Canada, which gave their names to ships, with sculpted markers. These markers will incorporate QR codes, allowing access to a web site to learn more about Battle of the Atlantic Place, and the ship that was named after their community.

Battle of the Atlantic Place will not be a museum. The visitor will be immersed in the story using interactive technologies and a multi-purpose theatre to allow the various story themes to be experienced. The story unfolds with an overview of the years and conditions on both sides of the Atlantic leading up to the war. A comprehensive treatment of Canada’s involvement in the Battle of the Atlantic will follow to explore how this national commitment impacted families, business, industry and commerce. Stories will be told of the individual sailor’s point of view, what it was like to serve at sea and how their families coped, and what Canadians did in and out of uniform to support the war at sea. A simulator will allow visitors to experience operations at sea, such as a night action in a ship or a U-Boat. A strategic and operational overview of the Battle of the Atlantic will include introduction to key national and Alliance leaders, the concerns and decisions affecting the war effort, and the political, economic and operational choices available to Canada. The consequences of the Battle will be explored in terms of how Canada changed from the agrarian based nation she had been to the very different industrialized nation that she became.

The major artifacts, HMCS Sackville and an RCAF Canadian-built Canso Flying Boat, will represent all Canadian ships and aircraft, and will allow visitors to ‘walk the decks’ and be under the ‘protective cover’ of those who placed themselves in danger to escort the convoys. The adjacent Memorial Hall will honour the over 5,000 members of the RCN, RCAF and Merchant Navy who perished at sea with the loss of 24 Canadian naval ships, 72 merchant ships, and numerous maritime aircraft; it will be a place of sober reflection of service and sacrifice.

Battle of the Atlantic Place will recognize and honour a generation that was supremely challenged, fought with great courage and advanced Canada onto the world stage.

Battle of the Atlantic Place will open in 2017, the 150th anniversary of Confederation. Financial support for this design stage has been provided by the Government of Canada, the Province of Nova Scotia, Halifax Regional Municipality, and corporate and private donors.