One of my students, Jonathan Machnee, has written a nice piece on the battle of Ypres — talking about a poem by Alden Nowlan.

From the plains of South Africa, to the mountains of Afghanistan, from the slopes of Vimy Ridge to the blood drenched beaches of Normandy, the Canadian Forces have proven themselves to be a strong ally and a formidable enemy in times of war. Through the Seven Years’ War of the English and French, the English-American War of 1812, and the uprisings of the Patriots’ War, Canada as a nation was formed. In the fields of Flanders, Canadian soldiers fought with an unbreakable resolve that pressed them on towards victory. This steadfast determination of the Canadians was shown time and again in the Second World War. Despite the onslaught of lead and flame that engulfed the Canadians on Juno beach and the bloody hell that was Ortona, the Canadian Forces conquered their foe, inch by bloody inch. 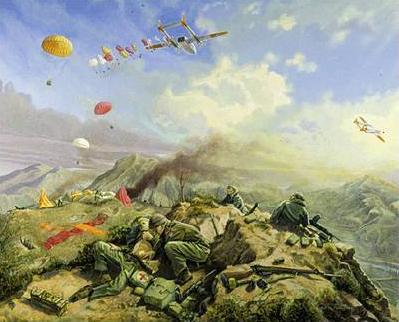 In Kap’yong, South Korea, the Princess Patricia’s Canadian Light Infantry stood their ground and held swarms of enemy soldiers at bay for three sleepless nights. It is often asked, what gives this small country such a strong resolve? What empowers its soldiers with such incorruptible determination? What is it that makes a country of labourers, farmers, and businessmen such a formidable fighting force? The answer lies with those men and women who have endured the onslaught of the east coast blizzards, navigated the unforgivable Atlantic Ocean, broken the ground of the Sudbury mines, faced the relentless toil and hardship of prairies, traversed the Rocky Mountains and fought the relentless winter of the tundra. The undefeatable resolve of the Canadian military was not due to superior equipment, overwhelming numbers, or large amounts of military funding. The unshakable ranks of the Canadian army were forged by the brutal Canadian winter, the unforgiving wilderness, and the shear stubbornness that was created by this adversity.

a farmer or fisherman by the sound of him,

revisiting Vimy Ridge, and they asked him

There was water up to our middles, yes

and there was rats, and yes

there was water up to our middles

and rats, all right enough,

and to tell you the truth

after the first three or four days

I started to get a little disgusted.

This passage, with both simplicity and a sense of naivety, describes the Canadian attitude. It should be asked, how could this be? How could a man go through four days of rats, mud, and bullets, and still only be a little disgusted? How could these men witness such a magnitude of desperation and still find some small piece of humour tucked into the horrors of war? What made these Canadian soldiers the only ones capable of taking the ridge at Vimy? What force selected these men and carved them into the professional soldiers capable of the impossible? The answer simply lies in the people and the stubborn nature that one must adopt when living in the adversity of the Canadian winters and prairie droughts, for whom else would be able to withstand such hellish conditions and say, “I started to get a little disgusted”?

Nowlan also describes the Second Battle of Ypres, the battle where the Germans first used chlorine gas, and how the Canadians were the only ones to hold the line. When its allies fled, Canada held strong. Amongst the yellow haze of the gas, when the Germans were sure their enemies had retreated, there stood the Canadians. With urine soaked rags covering their faces, the mechanics, farmers, and fishermen held their ground, refusing to give up an inch of the turf they had so obsessively guarded. This poem gives a description that is both real and accurate, a description of the Canadian attitude, a description of the attitude that formed a nation.

Perhaps they were too scared to run.

Perhaps they didn’t know any better

–that is possible, they were so innocent,

those farmboys and mechanics, you have to only look

at old pictures and see how they smiled

Perhaps they were too shy

To walk out on anybody, even Death.

Perhaps their only motivation

The Canada we know today has two sets of histories overseas. We have the history of being the elite shock troopers who struck fear into the hearts of the enemy and we have the history of humanitarian support and peacekeeping. It is very common that we replace one of these histories with the other. It is popular to forget Canada’s strong military history and the unmistakable contributions it has made in order to insure peace in lieu of the more favoured passive, humanitarian based, peacekeeping military. In an act of mistaken identity common to Canadian youth, the history of Canadian military prowess is often overlooked and seen as a mere contribution, while our peacekeeping efforts are at the forefront of our international policy. However, this idea of a passive force is more of a fabrication than it is reality. When Canada operated as a peacekeeper in countless deployments around the world, it brought with it the unmistakable bravado seen in both the Second and First World Wars. In the Medak Pocket in the Former Republic of Yugoslavia, Croatian soldiers, in an attempt at ethnic cleansing, fired on Canadian peacekeepers, expecting them to retreat and regroup like the other peacekeepers would. Instead of pulling back and retreating, the men of the Princess Patricia’s Canadian Light Infantry fought with an incredible ferocity that earned them a rare unit citation from the United Nations. In modern society, the peacekeeping effort is seen as a scarlet glove offered to a nation in need. This same image can be applied to the Canadian peacekeeper effort; however, Canada offered a scarlet glove that covered an iron fist.

Military experts and historians alike have said that war defined Canada. It is said that we became a nation because of how we fought in the First World War. It is said that the way we stood our ground in the face of conflict was what defined our nation, it is what set us apart from the rest and it is what put us on the face of the map. However, that is not the case. Instead of the war defining how Canadians acted, the way Canadians acted defined the war, and the way Canadians acted was defined by the geography, nature, and formation of Canada. The country of Canada itself is what turned farm boys and mechanics into the battle hardened troops that made a formidable name for themselves in the battle fields of Europe; Canada itself formed the stalwartly peacekeepers that stood up for what was right in the face of so much wrong. The wide dynamic of Canada made the fishermen, miners, farmers, trappers, and businessmen an unshakable force saying,

You squareheaded sons of bitches,

you want this God damn trench

you’re going to have to take it away