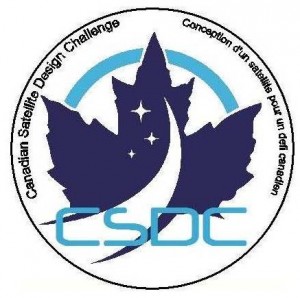 As part of the kick-off and promotional activities for the inauguration of the Canadian Satellite Design Challenge, a contest was recently held to solicit designs for a CSDC logo. The contest was open to students from the participating universites, with a $500 prize offered to the winning

Mr. Lawrence (Larry) Reeves, President, Geocentrix Technologies and Coordinator of the Canadian Satellite Design Challenge stated “In all, almost 40 designs were received, and I would like to thank all the students who submitted entries. I would also like to thank Wendy Keyzer and Colin Wilke of MDA in Richmond, B.C., for judging the entries – we very quickly converged on the winning entry.”

It is a pleasure to congratulate Officer Cadet Victoria Benotto of the Royal Military College of Canada for the following design:

This logo will now be used on all published CSDC materials, and will hopefully become extensively recognized as the competition begins and proceeds.

The Royal Military College of Canada, under the guidance of Dr. Jean-Marc Noël, Dr. Ron Vincent, Dr Gregg Wade and Major Marc Fricker, has entered a team of Officer Cadets into the Canadian Satellite Design Challenge. The winning team gets a free launch in space with their satellite. 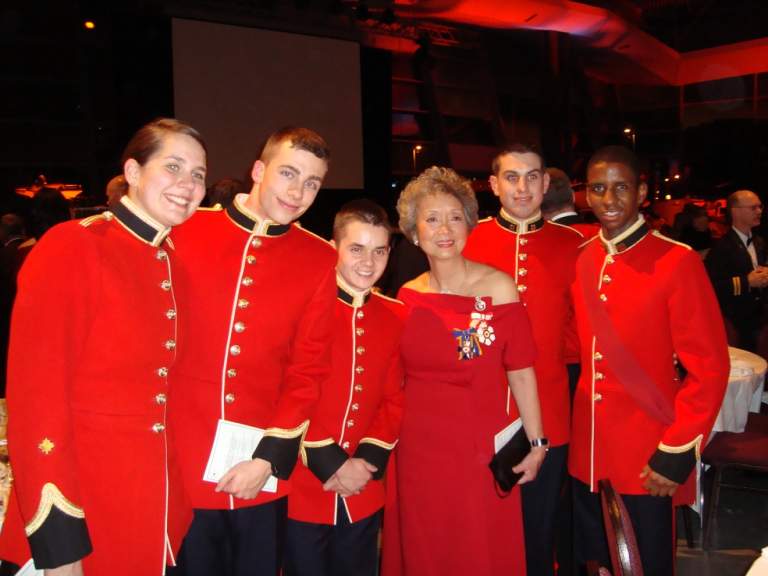 Vimy dinner was held on the 19th of November in the tank gallery located in the Ottawa National War Museum. The gallery was assembled in such a matter that it gave the setting of the dinner a sense of awe and appreciation. There were many white lined clothed tables set very royally for important people.

The students of the military college from Kingston and St. Jean were given the pleasure of dining with some of Canada’s greatest military and civilian leaders. It was very enlightening for us OCdts as it gave us the opportunity to talk with Officers and NCMs about their occupational roles and experiences. It was an inside look as to what we can expect in our future military careers.

We also had the chance to meet the very honourable Mrs Adrienne Clarkson, a formal Governor General of Canada. She made a point of introducing us OCdts and expressing her gratitude for our future commitment in the forces.

The seating plan was arranged so that I sat at a table with high ranking officers in the logistical army branch. Coincidently, my trade is also army logistics. I was happy to hear all the military stories they had to offer.

The Vimy dinner was a memorable night. The food and drinks were amazing and it was a great opportunity to meet many important people with different backgrounds. An experience that won’t be forgotten! 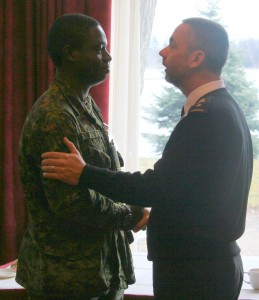 Caption: Commandant, Commodore WST Truelove was on hand recently at the weekly Military Wing Coffee break to pass on best wishes to OCdt Njabulo Tshuma who has transferred to the ranks from the ROTP. Along with his best wishes, Commodore Truelove presented the new Private with a commandant’s coin as a memento of his time at the military college.

Moving to the ranks

Njabulo Tshuma came to RMC as a ROTP cadet in August 2008, and had difficulties with the program.

Despite transferring to Holding Platoon and having very little military experience, he quickly gained the trust of the Holding Platoon IC. His attentiveness to other Ocdts in Holding Platoon, his diligent tracking of their employment and his leadership as the platoon’s 2 IC showed he was a very capable, mature and dedicated member of the CF.

During the past summer between Sgt Durnford’s departure and Sgt Chiasson’s arrival, OCdt Tshuma ensured Holding Platoon personnel were gainfully employed, conducted their scheduled PT and dutifully put in their leave passes. Although he was an Ocdt with little military experience, he showed excellent potential in his new career path.

Pvt Tshuma will be going to CFB Borden to begin training as a Med Tech.